Del, or nabla, is an operator used in mathematics, in particular, in vector calculus, as a vector differential operator, usually represented by the nabla symbol ∇. When applied to a function defined on a one-dimensional domain, it denotes its standard derivative as defined in calculus. When applied to a field (a function defined on a multi-dimensional domain), del may denote the gradient (locally steepest slope) of a scalar field (or sometimes of a vector field, as in the Navier–Stokes equations), the divergence of a vector field, or the curl (rotation) of a vector field, depending on the way it is applied.

Strictly speaking, del is not a specific operator, but rather a convenient mathematical notation for those three operators, that makes many equations easier to write and remember. The del symbol can be interpreted as a vector of partial derivative operators, and its three possible meanings—gradient, divergence, and curl—can be formally viewed as the product of scalars, dot product, and cross product, respectively, of the del "operator" with the field. These formal products do not necessarily commute with other operators or products.

In the Cartesian coordinate system RTemplate:Mvar with coordinates

, del is defined in terms of partial derivative operators as

, del is written as

Del can also be expressed in other coordinate systems, see for example del in cylindrical and spherical coordinates.

Del is used as a shorthand form to simplify many long mathematical expressions. It is most commonly used to simplify expressions for the gradient, divergence, curl, directional derivative, and Laplacian.

The vector derivative of a scalar field f is called the gradient, and it can be represented as:

It always points in the direction of greatest increase of f, and it has a magnitude equal to the maximum rate of increase at the point—just like a standard derivative. In particular, if a hill is defined as a height function over a plane h(x,y), the 2d projection of the gradient at a given location will be a vector in the xy-plane (visualizable as an arrow on a map) pointing along the steepest direction. The magnitude of the gradient is the value of this steepest slope.

In particular, this notation is powerful because the gradient product rule looks very similar to the 1d-derivative case:

However, the rules for dot products do not turn out to be simple, as illustrated by:

The divergence of a vector field

is a scalar function that can be represented as:

The divergence is roughly a measure of a vector field's increase in the direction it points; but more accurately, it is a measure of that field's tendency to converge toward or repel from a point.

The power of the del notation is shown by the following product rule:

The formula for the vector product is slightly less intuitive, because this product is not commutative:

The curl of a vector field

is a vector function that can be represented as:

The curl at a point is proportional to the on-axis torque to which a tiny pinwheel would be subjected if it were centered at that point.

The vector product operation can be visualized as a pseudo-determinant:

Again the power of the notation is shown by the product rule:

Unfortunately the rule for the vector product does not turn out to be simple:

The directional derivative of a scalar field f(x,y,z) in the direction

This gives the change of a field f in the direction of a. In operator notation, the element in parentheses can be considered a single coherent unit; fluid dynamics uses this convention extensively, terming it the convective derivative—the "moving" derivative of the fluid.

The Laplace operator is a scalar operator that can be applied to either vector or scalar fields; for cartesian coordinate systems it is defined as:

and the definition for more general coordinate systems is given in Vector Laplacian.

is a 9-term second-rank tensor, but can be denoted simply as

represents the dyadic product. This quantity is equivalent to the transpose of the Jacobian matrix of the vector field with respect to space.

For a small displacement

, the change in the vector field is given by: 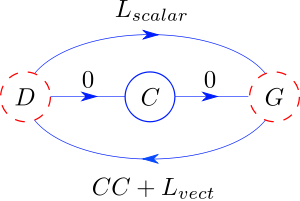 When del operates on a scalar or vector, either a scalar or vector is returned. Because of the diversity of vector products (scalar, dot, cross) one application of del already gives rise to three major derivatives: the gradient (scalar product), divergence (dot product), and curl (cross product). Applying these three sorts of derivatives again to each other gives five possible second derivatives, for a scalar field f or a vector field v; the use of the scalar Laplacian and vector Laplacian gives two more:

These are of interest principally because they are not always unique or independent of each other. As long as the functions are well-behaved, two of them are always zero:

Two of them are always equal:

The 3 remaining vector derivatives are related by the equation:

And one of them can even be expressed with the tensor product, if the functions are well-behaved:

Most of the above vector properties (except for those that rely explicitly on del's differential properties—for example, the product rule) rely only on symbol rearrangement, and must necessarily hold if the del symbol is replaced by any other vector. This is part of the value to be gained in notationally representing this operator as a vector.

Though one can often replace del with a vector and obtain a vector identity, making those identities mnemonic, the reverse is not necessarily reliable, because del does not commute in general.

A counterexample that relies on del's failure to commute:

A counterexample that relies on del's differential properties:

Central to these distinctions is the fact that del is not simply a vector; it is a vector operator. Whereas a vector is an object with both a magnitude and direction, del has neither a magnitude nor a direction until it operates on a variable vector.

For that reason, identities involving del must be derived with care, using both vector identities and differentiation identities such as the product rule.