Template:Condensed matter physics In solid-state and condensed matter physics, the density of states (DOS) of a system describes the number of states per interval of energy at each energy level that are available to be occupied. Unlike isolated systems, like atoms or molecules in gas phase, the density distributions are not discrete like a spectral density but continuous. A high DOS at a specific energy level means that there are many states available for occupation. A DOS of zero means that no states can be occupied at that energy level. In general a DOS is an average over the space and time domains occupied by the system. Local variations, most often due to distortions of the original system, are often called local density of states (LDOS). If the DOS of an undisturbed system is zero, the LDOS can locally be non-zero due to the presence of a local potential.

In quantum mechanical (QM) systems, waves, or wave-like particles can occupy modes or states with wavelengths and propagation directions dictated by the system. Often only specific states are permitted. In some systems, the interatomic spacing and the atomic charge of the material allows only electrons of certain wavelengths to exist. In other systems, the crystalline structure of the material allows waves to propagate in one direction, while suppressing wave propagation in another direction. Thus it can happen that many states are possible at a specific wavelength, and therefore at this associated energy, while no states are available at other energy levels: this distribution is characterized by the density of states. Depending on the QM system the density of states can be calculated for electrons, photons, or phonons, and can be given as a function of either energy or the wave vector k. The DOS is usually represented by one of the symbols g, ρ, D, n, or N. To convert between the DOS as a function of the energy or the wave vector, the system-specific energy dispersion relation between E and k must be known.

of energy in order to transition to another available mode.

In general, the topological properties of the system have a major impact on the properties of the density of states. The most well-known systems, like neutronium in neutron stars and free electron gases in metals (examples of degenerate matter and a Fermi gas), have a 3-dimensional Euclidean topology. Less familiar systems, like 2-dimensional electron gases (2DEG) in graphite layers and the Quantum Hall effect system in MOSFET type devices, have a 2-dimensional Euclidean topology. Even less familiar are Carbon nanotubes, the quantum wire and Luttinger liquid with their 1-dimensional topologies. Systems with 1D and 2D topologies are likely to become more common, assuming developments in nanotechnology and materials science proceed.

Symmetry and density of states 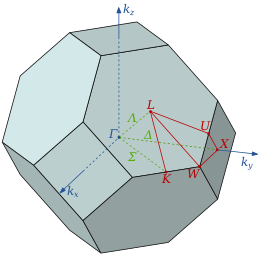 There are a large variety of systems and types of states for which DOS calculations can be done. An important property of a condensed matter system is the symmetry of the structure on its microscopic scale. Fluids, glasses or amorphous solids have dispersion relations with a rotational symmetry. In spherically symmetric systems the integrals of functions, for instance, are one-dimensional because all variables in the calculation depend only on the radial parameter of the dispersion relation. 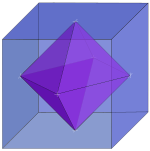 In general it is easier to calculate a DOS when the symmetry of the system is higher and the number of topological dimensions of the dispersion relation is lower. The DOS of dispersion relations with rotational symmetry can often be calculated analytically. This is fortunate, since many materials of practical interest, such as steel and silicon, have high symmetry. 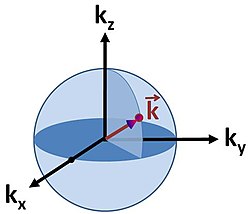 Figure 1: Spherical surface in k-space for electrons in three dimensions.

The density of states is dependent upon the dimensional limits of the object itself. The role dimensions play is evident from the units of DOS (Energy−1Volume−1). In the limit that the system is 2 dimensional, a volume becomes an area and in the limit of 1 dimension it becomes a length. It is important to note that the volume being referenced is the volume of k-space, the space enclosed by the constant energy surface of the system derived through a dispersion relation that relates E to k. The dispersion relation for electrons in a solid is given by the electronic band structure. An example of a 3-dimensional k-space is given in Fig. 1. It can be seen that the dimensionality of the system itself will confine the momentum of particles inside the system.

The calculation for DOS starts by counting the N allowed states at a certain k that are contained within [k, k+dk] inside the volume of the system. This is done by differentiating the whole k-space volume

in n-dimensions at an arbitrary k, with respect to k. The volume, area or length in 3, 2 or 1-dimensional spherical k-spaces are expressed by

for a n-dimensional k-space with the topologically determined constants

According to this scheme the density of wave vector states N is, through differentiating

with respect to k, expressed by

The 1, 2 and 3-dimensional density of wave vector states for a line, disk, or sphere are explicitly written as

One state is large enough to contain particles having wavelength λ. The wavelength is related to k through the relationship.

In a quantum system the length of λ will depend on a characteristic spacing of the system L that is confining the particles. Finally the density of states N is multiplied by a factor

, where s is a constant degeneracy factor that accounts for internal degrees of freedom due to such physical phenomena as spin or polarization. If no such phenomenon is present then

. Vk is the volume in k-space containing all possible states whose wavevectors are smaller than a certain k serving as a parameter.

. The general form of DOS of a system is given as

is not spherically symmetric and in many cases it isn't continuously rising either. To express D as a function of E the inverse of the dispersion relation

has to be substituted into the expression of

as a function of k to get the expression of

as a function of the energy. If the dispersion relation is not spherically symmetric or continuously rising and can't be inverted easily then in most cases the DOS has to be calculated numerically. More detailed derivations are available.[2][3]

where m is the electron mass. The dispersion relation is a spherically symmetric parabola and it is continuously rising so the DOS can be calculated easily. 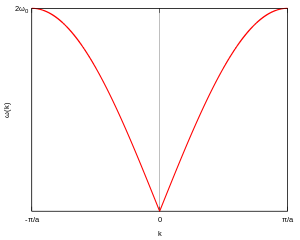 For longitudinal phonons in a string of atoms the dispersion relation of the kinetic energy in a 1-dimensional k-space, as shown in Figure 2, is given by

is the oscillator frequency,

the mass of the atoms,

the inter-atomic force constant and

inter-atomic spacing. For small values of

the dispersion relation is rather linear:

this relation can be transformed to

The two examples mentioned here can be expressed like

This is a kind of dispersion relation because it interrelates two wave properties and it is isotropic because only the length and not the direction of the wave vector appears in the expression. The magnitude of the wave vector is related to the energy as:

Accordingly, the volume of n-dimensional k-space containing wave vectors smaller than k is: 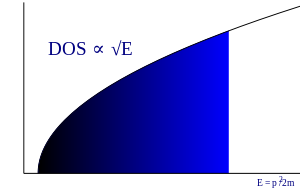 In the case of a parabolic dispersion relation (p = 2), such as applies to free electrons in a Fermi gas, the resulting density of states,

, for electrons in a n-dimensional systems is

. In 2-dimensional systems the DOS turns out to be independent of

. Finally for 3-dimensional systems the DOS rises as the square root of the energy.[4]

Including all the prefactors, the expression for the 3D DOS is

is the total volume, and

In the case of a linear relation (p = 1), such as applies to photons, acoustic phonons, or to some special kinds of electronic bands in a solid, the DOS in 1, 2 and 3 dimensional systems is related to the energy as:

Density of states and distribution functions

File:DOS band diagram.jpg
Figure 4: The density of states (red), the Fermi-Dirac probability distribution (black), and their product (blue) for a semiconductor. The valence band and the conduction band are labeled on the ordinate.

is the chemical potential (also denoted as EF and called the Fermi level),

is the Boltzmann constant, and

is temperature. Fig. 4 illustrates how the product of the Fermi-Dirac distribution function and the three-dimensional density of states for a semiconductor can give insight to physical properties such as carrier concentration and Energy band gaps.

, the number of particles

is sound velocity and

The density of states appears in many areas of physics, and helps to explain a number of quantum mechanical phenomena.

The photon density of states can be manipulated by using periodic structures with length scales on the order of the wavelength of light. Some structures can completely inhibit the propagation of light of certain colors (energies), creating a photonic bandgap: the DOS is zero for those photon energies. Other structures can inhibit the propagation of light only in certain directions to create mirrors, waveguides, and cavities. Such periodic structures are known as photonic crystals. In nanostructured media the concept of Local density of states (LDOS) is often more relevant than that of DOS, as the DOS varies considerably from point to point.

Calculation of the density of states

Interesting systems are in general complex, for instance compounds, biomolecules, polymers, etc. Because of the complexity of these systems the analytical calculation of the density of states is in most of the cases impossible. Computer simulations offer a set of algorithms to evaluate the density of states with a high accuracy. One of these algorithms is called the Wang and Landau algorithm.[5]

Within the Wang and Landau scheme any previous knowledge of the density of states is required. One proceeds as follows: the cost function (for example the energy) of the system is discretized. Each time the bin i is reached one updates a histogram for the density of states,

where n denotes the n-th update step. The simulation finishes when the modification factor is less than a certain threshold, for instance

The Wang and Landau algorithm has some advantages over other common algorithms such as multicanonical simulations and Parallel tempering. For example, the density of states is obtained as the main product of the simulation. Additionally, Wang and Landau simulations are completely independent of the temperature. This feature allows to compute the density of states of systems with very rough energy landscape such as proteins.[6]

Mathematically the density of states is formulated in terms of a tower of covering maps.[7]