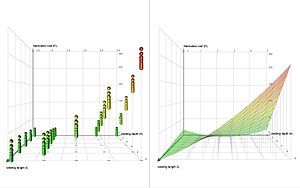 In general usage, design of experiments (DOE) or experimental design is the design of any information-gathering exercises where variation is present, whether under the full control of the experimenter or not. However, in statistics, these terms are usually used for controlled experiments. Formal planned experimentation is often used in evaluating physical objects, chemical formulations, structures, components, and materials. Other types of study, and their design, are discussed in the articles on computer experiments, opinion polls and statistical surveys (which are types of observational study), natural experiments and quasi-experiments (for example, quasi-experimental design). See Experiment for the distinction between these types of experiments or studies.

In the design of experiments, the experimenter is often interested in the effect of some process or intervention (the "treatment") on some objects (the "experimental units"), which may be people, parts of people, groups of people, plants, animals, etc. Design of experiments is thus a discipline that has very broad application across all the natural and social sciences and engineering.

In 1747, while serving as surgeon on HMS Salisbury, James Lind carried out a controlled experiment to develop a cure for scurvy.[1]

Lind selected 12 men from the ship, all suffering from scurvy. Lind limited his subjects to men who "were as similar as I could have them", that is he provided strict entry requirements to reduce extraneous variation. He divided them into six pairs, giving each pair different supplements to their basic diet for two weeks. The treatments were all remedies that had been proposed:

The men given citrus fruits recovered dramatically within a week. One of them returned to duty after six days, and the others cared for the rest. The other subjects experienced some improvement, but nothing compared to the subjects who ate the citrus fruits, which proved substantially superior to the other treatments.

{{#invoke:main|main}} {{#invoke:see also|seealso}} A theory of statistical inference was developed by Charles S. Peirce in "Illustrations of the Logic of Science" (1877–1878) and "A Theory of Probable Inference" (1883), two publications that emphasized the importance of randomization-based inference in statistics.

{{#invoke:main|main}} {{#invoke:see also|seealso}} Charles S. Peirce randomly assigned volunteers to a blinded, repeated-measures design to evaluate their ability to discriminate weights.[2][3][4][5] Peirce's experiment inspired other researchers in psychology and education, which developed a research tradition of randomized experiments in laboratories and specialized textbooks in the 1800s.[2][3][4][5]

{{#invoke:main|main}} {{#invoke:see also|seealso}} The use of a sequence of experiments, where the design of each may depend on the results of previous experiments, including the possible decision to stop experimenting, is within the scope of Sequential analysis, a field that was pioneered[7] by Abraham Wald in the context of sequential tests of statistical hypotheses.[8] Herman Chernoff wrote an overview of optimal sequential designs,[9] while adaptive designs have been surveyed by S. Zacks.[10] One specific type of sequential design is the "two-armed bandit", generalized to the multi-armed bandit, on which early work was done by Herbert Robbins in 1952.[11]

A methodology for designing experiments was proposed by Ronald A. Fisher, in his innovative books: "The Arrangement of Field Experiments" (1926) and The Design of Experiments (1935). Much of his pioneering work dealt with agricultural applications of statistical methods. As a mundane example, he described how to test the hypothesis that a certain lady could distinguish by flavour alone whether the milk or the tea was first placed in the cup (AKA the "Lady tasting tea" experiment). These methods have been broadly adapted in the physical and social sciences, and are still used in agricultural engineering. The concepts presented here differ from the design and analysis of computer experiments.

Comparison
In some fields of study it is not possible to have independent measurements to a traceable standard. Comparisons between treatments are much more valuable and are usually preferable. Often one compares against a scientific control or traditional treatment that acts as baseline.

Randomization
Random assignment is the process of assigning individuals at random to groups or to different groups in an experiment. The random assignment of individuals to groups (or conditions within a group) distinguishes a rigorous, "true" experiment from an observational study or "quasi-experiment".[12] There is an extensive body of mathematical theory that explores the consequences of making the allocation of units to treatments by means of some random mechanism such as tables of random numbers, or the use of randomization devices such as playing cards or dice. Assigning units to treatments at random tends to mitigate confounding, which makes effects due to factors other than the treatment to appear to result from the treatment. The risks associated with random allocation (such as having a serious imbalance in a key characteristic between a treatment group and a control group) are calculable and hence can be managed down to an acceptable level by using enough experimental units. The results of an experiment can be generalized reliably from the experimental units to a larger population of units only if the experimental units are a random sample from the larger population; the probable error of such an extrapolation depends on the sample size, among other things. Random does not mean haphazard, and great care must be taken that appropriate random methods are used.

Replication
Measurements are usually subject to variation and uncertainty. Measurements are repeated and full experiments are replicated to help identify the sources of variation, to better estimate the true effects of treatments, to further strengthen the experiment's reliability and validity, and to add to the existing knowledge of the topic.[13] However, certain conditions must be met before the replication of the experiment is commenced: the original research question has been published in a peer-reviewed journal or widely cited, the researcher is independent of the original experiment, the researcher must first try to replicate the original findings using the original data, and the write-up should state that the study conducted is a replication study that tried to follow the original study as strictly as possible.[14]

Blocking
Blocking is the arrangement of experimental units into groups (blocks/lots) consisting of units that are similar to one another. Blocking reduces known but irrelevant sources of variation between units and thus allows greater precision in the estimation of the source of variation under study. 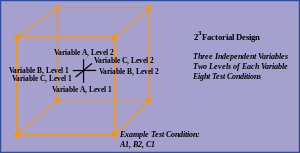 Orthogonality concerns the forms of comparison (contrasts) that can be legitimately and efficiently carried out. Contrasts can be represented by vectors and sets of orthogonal contrasts are uncorrelated and independently distributed if the data are normal. Because of this independence, each orthogonal treatment provides different information to the others. If there are T treatments and T – 1 orthogonal contrasts, all the information that can be captured from the experiment is obtainable from the set of contrasts.

Factorial experiments
Use of factorial experiments instead of the one-factor-at-a-time method. These are efficient at evaluating the effects and possible interactions of several factors (independent variables). Analysis of experiment design is built on the foundation of the analysis of variance, a collection of models that partition the observed variance into components, according to what factors the experiment must estimate or test. 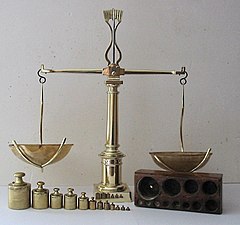 This example is attributed to Harold Hotelling.[9] It conveys some of the flavor of those aspects of the subject that involve combinatorial designs.

Weights of eight objects are measured using a pan balance and set of standard weights. Each weighing measures the weight difference between objects in the left pan vs. any objects in the right pan by adding calibrated weights to the lighter pan until the balance is in equilibrium. Each measurement has a random error. The average error is zero; the standard deviations of the probability distribution of the errors is the same number σ on different weighings; and errors on different weighings are independent. Denote the true weights by

Then the estimated value of the weight θ1 is

Similar estimates can be found for the weights of the other items. For example

The question of design of experiments is: which experiment is better?

Many problems of the design of experiments involve combinatorial designs, as in this example.

False positive conclusions, often resulting from the pressure to publish or the author's own confirmation bias, are an inherent hazard in many fields, and experimental designs with undisclosed degrees of freedom are a problem.[15] This can lead to conscious or unconscious "p-hacking": trying multiple things until you get the desired result. It typically involves the manipulation - perhaps unconsciously - of the process of statistical analysis and the degrees of freedom until they return a figure below the p<.05 level of statistical significance.[16][17] So the design of the experiment should include a clear statement proposing the analyses to be undertaken.

Clear and complete documentation of the experimental methodology is also important in order to support replication of results.[18]

Discussion topics when setting up an experimental design

It is best that a process be in reasonable statistical control prior to conducting designed experiments. When this is not possible, proper blocking, replication, and randomization allow for the careful conduct of designed experiments.[20] To control for nuisance variables, researchers institute control checks as additional measures. Investigators should ensure that uncontrolled influences (e.g., source credibility perception) do not skew the findings of the study. A manipulation check is one example of a control check. Manipulation checks allow investigators to isolate the chief variables to strengthen support that these variables are operating as planned.

One of the most important requirements of experimental research designs is the necessity of eliminating the effects of spurious, intervening, and antecedent variables. In the most basic model, cause (X) leads to effect (Y). But there could be a third variable (Z) that influences (Y), and X might not be the true cause at all. Z is said to be a spurious variable and must be controlled for. The same is true for intervening variables (a variable in between the supposed cause (X) and the effect (Y)), and anteceding variables (a variable prior to the supposed cause (X) that is the true cause). When a third variable is involved and has not been controlled for, the relation is said to be a zero orderTemplate:Disambiguation needed relationship. In most practical applications of experimental research designs there are several causes (X1, X2, X3). In most designs, only one of these causes is manipulated at a time.

Some efficient designs for estimating several main effects were found independently and in near succession by Raj Chandra Bose and K. Kishen in 1940 at the Indian Statistical Institute, but remained little known until the Plackett-Burman designs were published in Biometrika in 1946. About the same time, C. R. Rao introduced the concepts of orthogonal arrays as experimental designs. This concept played a central role in the development of Taguchi methods by Genichi Taguchi, which took place during his visit to Indian Statistical Institute in early 1950s. His methods were successfully applied and adopted by Japanese and Indian industries and subsequently were also embraced by US industry albeit with some reservations.

In 1950, Gertrude Mary Cox and William Gemmell Cochran published the book Experimental Designs, which became the major reference work on the design of experiments for statisticians for years afterwards.

Developments of the theory of linear models have encompassed and surpassed the cases that concerned early writers. Today, the theory rests on advanced topics in linear algebra, algebra and combinatorics.

Laws and ethical considerations preclude some carefully designed experiments with human subjects. Legal constraints are dependent on jurisdiction. Constraints may involve institutional review boards, informed consent and confidentiality affecting both clinical (medical) trials and behavioral and social science experiments.[24] In the field of toxicology, for example, experimentation is performed on laboratory animals with the goal of defining safe exposure limits for humans.[25] Balancing the constraints are views from the medical field.[26] Regarding the randomization of patients, "... if no one knows which therapy is better, there is no ethical imperative to use one therapy or another." (p 380) Regarding experimental design, "...it is clearly not ethical to place subjects at risk to collect data in a poorly designed study when this situation can be easily avoided...". (p 393)