In geometry, a dihedral or torsion angle is the angle between two planes. 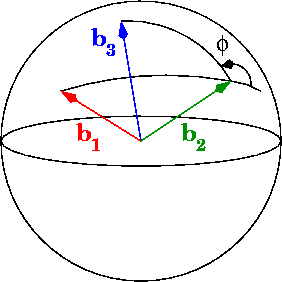 Figure 1: Dihedral angle of three vectors, defined as an exterior spherical angle. The longer and shorter black segments are arcs of the great circles passing through 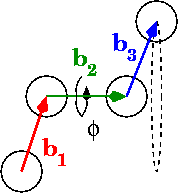 Figure 3: Dihedral angle defined by three bond vectors (shown in red, green and blue) connecting four atoms. From this perspective, the second bond vector (green) is coming out of the page.

can be defined as the angle through which plane A must be rotated (about their common line of intersection) to align it with plane B. Thus,

. For precision, one should specify the angle or its supplement, since both rotations will cause the planes to coincide.

In higher dimension, a dihedral angle represents the angle between two hyperplanes.[1]

Since a plane can be defined in several ways (e.g., by vectors or points in them, or by their normal vectors), there are several equivalent definitions of a dihedral angle.

(red, green and blue, respectively, in the diagram). The vectors

define the first plane, whereas

define the second plane. The dihedral angle corresponds to an exterior spherical angle, given by

Every polyhedron, regular and irregular, convex and concave, has a dihedral angle at every edge.

A dihedral angle (also called the face angle) is the internal angle at which two adjacent faces meet. An angle of zero degrees means the face normal vectors are antiparallel and the faces overlap each other (Implying part of a degenerate polyhedron). An angle of 180 degrees means the faces are parallel (like a tiling). An angle greater than 180 exists on concave portions of a polyhedron.

Every dihedral angle in an edge-transitive polyhedron has the same value. This includes the 5 Platonic solids, the 4 Kepler–Poinsot polyhedra, the two quasiregular solids, and two quasiregular dual solids.

varies only the distance between the first and fourth atoms; the other interatomic distances are constrained by the chemical bond lengths and bond angles.

is the counterclockwise angle made by the vectors

The planarity of the peptide bond usually restricts ω to be 180° (the typical trans case) or 0° (the rare cis case). The distance between the Cα atoms in the trans and cis isomers is approximately 3.8 and 2.9 Å, respectively. The cis isomer is mainly observed in Xaa-Pro peptide bonds (where Xaa is any amino acid).

Dihedral angles have also been defined by the IUPAC for other molecules, such as the nucleic acids (DNA and RNA) and for polysaccharides.

The dihedral angle between two planes relies on being able to efficiently generate a normal vector to each of the planes. One approach is to use the cross product. If A1, A2, and A3 are three non-collinear points on plane A, and B1, B2, and B3 are three non-collinear points on plane B, then UA = (A2−A1) × (A3−A1) is orthogonal to plane A and UB = (B2−B1) × (B3−B1) is orthogonal to plane B. The (unsigned) dihedral angle can therefore be computed with either

Another approach to computing the dihedral angle is first to pick an arbitrary vector V that is not tangent to either of the two planes. Then applying the Gram–Schmidt process to the three vectors (A2−A1, A3−A1, V) produces an orthonormal basis of space, the third vector of which will be normal to plane A. Doing the same with the vectors (B2−B1, B3−B1, V) yields a vector normal to plane B. The angle between the two normal vectors can then be computed by any method desired. This approach generalizes to higher dimensions, but does not work with flats that have a codimension greater than 1.

To compute the dihedral angle between two flats, it is additionally necessary to ensure that each of the two normal vectors is selected to have a minimal projection onto the other flat. The Gram–Schmidt process does not guarantee this property, but it can be guaranteed with a simple eigenvector technique.[3] If

is a matrix of orthonormal basis vectors for flat A, and

is a matrix of orthonormal basis vectors for flat B, and

the eigenvector with the smallest corresponding eigenvalue of

the eigenvector with the smallest corresponding eigenvalue of

then, the angle between

is the dihedral angle between A and B, even if A and B have a codimension greater than 1.