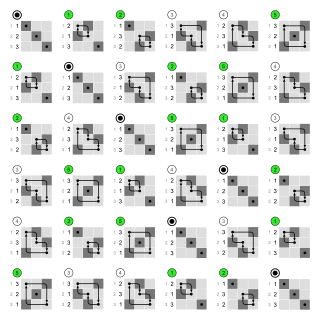 Cayley table of D3 = S3
These are the positions of the six entries:

Only the neutral elements are symmetric to the main diagonal, so this group is not abelian.

In mathematics, the smallest non-abelian group has 6 elements. It is a dihedral group with notation D3 (or D6; both are used) and the symmetric group of degree 3, with notation S3.[1]

This page illustrates many group concepts using this group as example.

In two dimensions, the group D3 is the symmetry group of an equilateral triangle. In contrast with the case of a square or other polygon, all permutations of the vertices can be achieved by rotation and flipping over (or reflecting).

In three dimensions, there are two different symmetry groups which are algebraically the group D3: 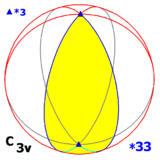 Permutations of a set of three objects 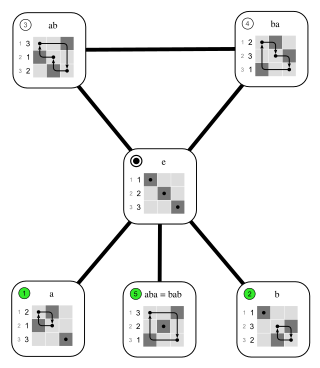 In multiplicative form, we traditionally write xy for the combined action "first do y, then do x"; so that ab is the action RGB ↦ RBG ↦ BRG, i.e., "take the last block and move it to the front". If we write e for "leave the blocks as they are" (the identity action), then we can write the six permutations of the set of three blocks as the following actions:

The notation in brackets is the cycle notation.

Note that the action aa has the effect RGB ↦ GRB ↦ RGB, leaving the blocks as they were; so we can write aa = e. Similarly,

so each of the above actions has an inverse.

By inspection, we can also determine associativity and closure; note for example that

The group is non-abelian since, for example, ab ≠ ba. Since it is built up from the basic actions a and b, we say that the set {a,b}Template:Void generates it.

The group has presentation

where a and b are swaps and r is a cyclic permutation.

With the generators a and b, we define the additional shorthands c := aba, d := ab and f := ba. In the form of a Cayley table, the group operations now read:

Note that non-equal non-identity elements only commute if they are each other's inverse. Therefore the group is centerless.

We can easily distinguish three kinds of permutations of the three blocks, called conjugacy classes of the group:

The left cosets and the right cosets of A3 are both that subgroup itself and the three swaps.

Thus A3 is normal, and the other three non-trivial subgroups are not. The quotient group G / A3 is isomorphic with C2.

, a semidirect product, where H is a subgroup of two elements: () and one of the three swaps.

If the original group is that generated by a 120°-rotation of a plane about a point, and reflection with respect to a line through that point, then the quotient group has the two elements which can be described as the subsets "just rotate (or do nothing)" and "take a mirror image".

Note that for the symmetry group of a square, an uneven permutation of vertices does not correspond to taking a mirror image, but to operations not allowed for rectangles, i.e. 90° rotation and applying a diagonal axis of reflection.

if both φ(0) and φ(1) are the identity. The semidirect product is isomorphic to the dihedral group of order 6 if φ(0) is the identity and φ(1) is the non-trivial automorphism of C3, which inverses the elements.

In a Cayley table:

Note that for the second digit we essentially have a 2×2 table, with 3×3 equal values for each of these 4 cells. For the first digit the left half of the table is the same as the right half, but the top half is different from the bottom half.

For the direct product the table is the same except that the first digits of the bottom half of the table are the same as in the top half.

Consider D3 in the geometrical way, as symmetry group of isometries of the plane, and consider the corresponding group action on a set of 30 evenly spaced points on a circle, numbered 0 to 29, with 0 at one of the reflexion axes.

This section illustrates group action concepts for this case.

The action of G on X is called

The set of all orbits of X under the action of G is written as X / G.

For every x in X, we define the stabilizer subgroup of x (also called the isotropy group or little group) as the set of all elements in G that fix x:

For a fixed x in X, consider the map from G to X given by g ↦ g · x. The image of this map is the orbit of x and the coimage is the set of all left cosets of Gx. The standard quotient theorem of set theory then gives a natural bijection between G / Gx and Gx. Specifically, the bijection is given by hGx ↦ h · x. This result is known as the orbit-stabilizer theorem. In the two cases of a small orbit, the stabilizer is non-trivial.

If two elements x and y belong to the same orbit, then their stabilizer subgroups, Gx and Gy, are isomorphic. More precisely: if y = g · x, then Gy = gGx g−1. In the example this applies e.g. for 5 and 25, both reflection points. Reflection about 25 corresponds to a rotation of 10, reflection about 5, and rotation of −10.

A result closely related to the orbit-stabilizer theorem is Burnside's lemma:

Up to isomorphism, this group has three irreducible complex unitary representations, which we will call

, where the subscript indicates the dimension. By its definition as a permutation group over the set with three elements, the group has a representation on

by permuting the entries of the vector, the fundamental representation. This representation is not irreducible, as it decomposes as a direct sum of

appears as the subspace of vectors of the form

is the representation on its orthogonal complement, which are vectors of the form

arises through the groups

grading: The action is multiplication by the sign of the permutation of the group element. Every finite group has such a representation since it is a subgroup of a cyclic group by its regular action. Counting the square dimensions of the representations (

, the order of the group), we see these must be all of the irreducible representations.[2]

A 2-dimensional irreducible linear representation yields a 1-dimensional projective representation (i.e., an action on the projective line, an embedding in the Möbius group PGL(2, C)), as elliptic transforms. This can be represented by matrices with entries 0 and ±1 (here written as fractional linear transformations), known as the anharmonic group:

and thus descends to a representation over any field, which is always faithful/injective (since no two terms differ only by only a sign). Over the field with two elements, the projective line has only 3 points, and this is thus the exceptional isomorphism

In characteristic 3, this embedding stabilizes the point

(in characteristic greater than 3 these points are distinct and permuted, and are the orbit of the harmonic cross-ratio). Over the field with three elements, the projective line has 4 elements, and since PGL(2, 3) is isomorphic to the symmetric group on 4 elements, S4, the resulting embedding

equals the stabilizer of the point