In mathematics, and more specifically in graph theory, a directed graph (or digraph) is a graph, or set of nodes connected by edges, where the edges have a direction associated with them. In formal terms, a digraph is a pair

It differs from an ordinary or undirected graph, in that the latter is defined in terms of unordered pairs of vertices, which are usually called edges.

is considered to be directed from

is called the head and

is called the tail of the arc;

is said to be a direct successor of

is said to be a direct predecessor of

. If a path made up of one or more successive arcs leads from

is said to be a successor of

is said to be a predecessor of

is called the arc

The adjacency matrix of a digraph (with loops and multiple arcs) is the integer-valued matrix with rows and columns corresponding to the nodes, where a nondiagonal entry

is the number of arcs from node i to node j, and the diagonal entry

is the number of loops at node i. The adjacency matrix of a digraph is unique up to identical permutation of rows and columns.

Another matrix representation for a digraph is its incidence matrix. 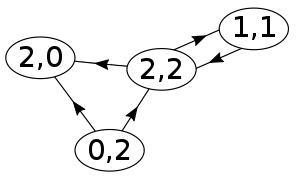 The indegree is denoted

is called a source, as it is the origin of each of its incident edges. Similarly, a vertex with

is called a sink.

The degree sum formula states that, for a directed graph,

, the graph is called a balanced digraph.[3]

The digraph realization problem is the problem of finding a digraph with the degree sequence being a given sequence of positive integer pairs. (Trailing pairs of zeros may be ignored since they are trivially realized by adding an appropriate number of isolated vertices to the digraph.) A sequence which is the degree sequence of some digraph, i.e. for which the digraph realization problem has a solution, is called a digraphic or digraphical sequence. This problem can either be solved by the Kleitman–Wang algorithm or by the Fulkerson–Chen–Anstee theorem.

A tournament on 4 vertices

A tournament is an oriented graph obtained by choosing a direction for each edge in an undirected complete graph.

In the theory of Lie groups, a quiver Q is a directed graph serving as the domain of, and thus characterizing the shape of, a representation V defined as a functor, specifically an object of the functor category FinVctKF(Q) where F(Q) is the free category on Q consisting of paths in Q and FinVctK is the category of finite-dimensional vector spaces over a field K. Representations of a quiver label its vertices with vector spaces and its edges (and hence paths) compatibly with linear transformations between them, and transform via natural transformations.