In fluid dynamics, dispersion of water waves generally refers to frequency dispersion, which means that waves of different wavelengths travel at different phase speeds. Water waves, in this context, are waves propagating on the water surface, and forced by gravity and surface tension. As a result, water with a free surface is generally considered to be a dispersive medium.

Besides frequency dispersion, water waves also exhibit amplitude dispersion. This is a nonlinear effect, by which waves of larger amplitude have a different phase speed from small-amplitude waves.

This section is about frequency dispersion for waves on a fluid layer forced by gravity, and according to linear theory.

The simplest propagating wave of unchanging form is a sine wave. A sine wave with water surface elevation η( x, t ) is given by:[1]

Characteristic phases of a water wave are:

Essential for water waves, and other wave phenomena in physics, is that free propagating waves of non-zero amplitude only exist when the angular frequency ω and wavenumber k (or equivalently the wavelength λ and period T ) satisfy a functional relationship: the frequency dispersion relation[3][4]

The dispersion relation has two solutions: ω = +Ω(k) and ω = -Ω(k), corresponding to waves travelling in the positive or negative x–direction. The dispersion relation will in general depend on several other parameters in addition to the wavenumber k. For gravity waves, according to linear theory, these are the acceleration by gravity and the water depth.

An initial wave phase θ = θ0 propagates as a function of space and time. Its subsequent position is given by:

This shows that the phase moves with the velocity:[1]

which is called the phase velocity.

In the left figure, it can be seen that shallow water waves, with wavelengths λ much larger than the water depth h, travel with the phase velocity[1]

with g the acceleration by gravity and cp the phase speed. Since this shallow-water phase speed is independent of the wavelength, shallow water waves do not have frequency dispersion.

Using another normalization for the same frequency dispersion relation, the figure on the right shows that in deep water, with water depth h larger than half the wavelength λ (so for h/λ > 0.5), the phase velocity cp is independent of the water depth:[1]

with T the wave period (the reciprocal of the frequency f, T=1/f ). So in deep water the phase speed increases with the wavelength, and with the period.

Since the phase speed satisfies cp = λ/T = λf, wavelength and period (or frequency) are related. For instance in deep water:

The dispersion characteristics for intermediate depth are given below.

Frequency dispersion in bichromatic groups of gravity waves on the surface of deep water. The red dot moves with the phase velocity, and the green dots propagate with the group velocity.

Interference of two sinusoidal waves with slightly different wavelengths, but the same amplitude and propagation direction, results in a beat pattern, called a wave group. As can be seen in the animation, the group moves with a group velocity cg different from the phase velocity cp, due to frequency dispersion.

The group velocity also turns out to be the energy transport velocity. This is the velocity with which the mean wave energy is transported horizontally in a narrow-band wave field.[6][7]

In the case of a group velocity different from the phase velocity, a consequence is that the number of waves counted in a wave group is different when counted from a snapshot in space at a certain moment, from when counted in time from the measured surface elevation at a fixed position. Consider a wave group of length Λg and group duration of τg. The group velocity is:[8]

The water surface elevation η(x,t), as a function of horizontal position x and time t, for a bichromatic wave group of full modulation can be mathematically formulated as:[9]

Both ω1 and k1, as well as ω2 and k2, have to satisfy the dispersion relation:

Using trigonometric identities, the surface elevation is written as:[8]

Wave groups can only be discerned in case of a narrow-banded signal, with the wave-number difference k1 - k2 small compared to the mean wave number ½ (k1 + k2).

The effect of frequency dispersion is that the waves travel as a function of wavelength, so that spatial and temporal phase properties of the propagating wave are constantly changing. For example, under the action of gravity, water waves with a longer wavelength travel faster than those with a shorter wavelength.

While two superimposed sinusoidal waves, called a bichromatic wave, have an envelope which travels unchanged, three or more sinusoidal wave components result in a changing pattern of the waves and their envelope. A sea state – that is: real waves on the sea or ocean – can be described as a superposition of many sinusoidal waves with different wavelengths, amplitudes, initial phases and propagation directions. Each of these components travels with its own phase velocity, in accordance with the dispersion relation. The statistics of such a surface can be described by its power spectrum.[11]

Deep water corresponds with water depths larger than half the wavelength, which is the common situation in the ocean. In deep water, longer period waves propagate faster and transport their energy faster. The deep-water group velocity is half the phase velocity. In shallow water, for wavelengths larger than twenty times the water depth,[12] as found quite often near the coast, the group velocity is equal to the phase velocity.

The full linear dispersion relation was first found by Pierre-Simon Laplace, although there were some errors in his solution for the linear wave problem. The complete theory for linear water waves, including dispersion, was derived by George Biddell Airy and published in about 1840. A similar equation was also found by Philip Kelland at around the same time (but making some mistakes in his derivation of the wave theory).[13] 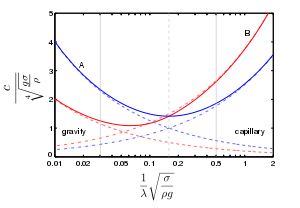 Dispersion of gravity-capillary waves on the surface of deep water. Phase and group velocity divided by

as a function of inverse relative wavelength

In case of gravity–capillary waves, where surface tension affects the waves, the dispersion relation becomes:[4]

with σ the surface tension (in N/m).

For a water–air interface (with σ = 0.074 N/m and ρ = 1000 kg/m³) the waves can be approximated as pure capillary waves – dominated by surface-tension effects – for wavelengths less than Template:Convert. For wavelengths above Template:Convert the waves are to good approximation pure surface gravity waves with very little surface-tension effects.[14]

Amplitude dispersion effects appear for instance in the solitary wave: a single hump of water traveling with constant velocity in shallow water with a horizontal bed. Note that solitary waves are near-solitons, but not exactly – after the interaction of two (colliding or overtaking) solitary waves, they have changed a bit in amplitude and an oscillatory residual is left behind.[15] The single soliton solution of the Korteweg–de Vries equation, of wave height H in water depth h far away from the wave crest, travels with the velocity:

So for this nonlinear gravity wave it is the total water depth under the wave crest that determines the speed, with higher waves traveling faster than lower waves. Note that solitary wave solutions only exist for positive values of H, solitary gravity waves of depression do not exist.

This implies that large waves travel faster than small ones of the same frequency. This is only noticeable when the wave steepness k A is large.

Water waves on a mean flow (so a wave in a moving medium) experience a Doppler shift. Suppose the dispersion relation for a non-moving medium is:

with k the wavenumber. Then for a medium with mean velocity vector V, the dispersion relationship with Doppler shift becomes:[17]

where k is the wavenumber vector, related to k as: k = |k|. The inner product k•V is equal to: k•V = kV cos α, with V the length of the mean velocity vector V: V = |V|. And α the angle between the wave propagation direction and the mean flow direction. For waves and current in the same direction, k•V=kV.

Other articles on dispersion