In geometry, a disphenoid (also bisphenoid) (from Greek sphenoeides, "wedgelike" [1]) is a tetrahedron whose four faces are congruent acute-angled triangles.[2] It can also be described as a tetrahedron in which every two edges that are opposite each other have equal lengths. Other names are isosceles tetrahedron and equifacial tetrahedron. They can also be seen as digonal antiprisms as an alternated quadrilateral prism. All the solid angles and vertex figures of a disphenoid are the same, and the sum of the face angles at each vertex is equal to two right angles. However, a disphenoid is not a regular polyhedron, because, in general, its faces are not regular polygons, and it is not edge-transitive . 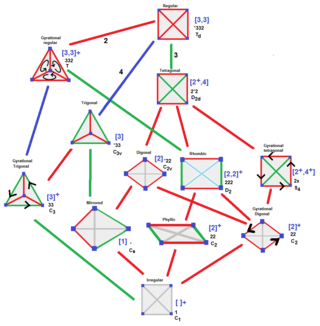 The digonal disphenoid is not a disphenoid as defined above. It has two sets of isosceles triangles faces, and it has C2v. The most general disphenoid term is the phyllic disphenoid with only two types of scalene triangles. Tetrahedral diagrams are included for each type below, with edges colored by isometric equivalence, and are gray colored for unique edges.

A tetrahedron is a disphenoid if and only if its circumscribed parallelepiped is right-angled.[3]

We also have that a tetrahedron is a disphenoid if and only if the center in the circumscribed sphere and the inscribed sphere coincide.[4]

The volume of a disphenoid with opposite edges of length l, m and n is given by[5]

The circumscribed sphere has radius[5] (the circumradius)

and the inscribed sphere has radius[5]

where V is the volume of the disphenoid and T is the area of any face, which is given by Heron's formula. There is also the following interesting relation connecting the volume and the circumradius:[5]

The square of the lengths of the bimedians are[5]

If the four faces of a tetrahedron have the same perimeter, then the tetrahedron is a disphenoid.[4]

If the four faces of a tetrahedron have the same area, then it is a disphenoid.[3] [4]

The centers in the circumscribed and inscribed spheres coincide with the centroid of the disphenoid.[5]

The bimedians are perpendicular to the edges they connect and to each other.[5]

"Disphenoid" is also used to describe two forms of crystal: