In mathematics a divisor of an integer

, also called a factor of

, is an integer that can be multiplied by some other integer to produce

Two versions of the definition of a divisor are commonplace:

if there exists an integer

.[1] Under this definition, the statement

In the remainder of this article, which definition is applied is indicated where this is significant.

Divisors can be negative as well as positive, although sometimes the term is restricted to positive divisors. For example, there are six divisors of 4; they are 1, 2, 4, −1, −2, and −4, but only the positive ones (1, 2, and 4) would usually be mentioned.

There are divisibility rules which allow one to recognize certain divisors of a number from the number's digits.

The generalization can be said to be the concept of divisibility in any integral domain. 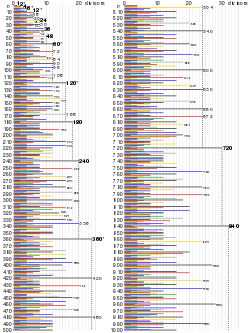 Plot of the number of divisors of integers from 1 to 1000. Prime numbers have exactly 2 divisors, and highly composite numbers are in bold.

There are some elementary rules:

. This is called Euclid's lemma.

is a prime number and

A positive divisor of

which is different from

is called a proper divisor or an aliquot part of

. A number that does not evenly divide

but leaves a remainder is called an aliquant part of

whose only proper divisor is 1 is called a prime number. Equivalently, a prime number is a positive integer which has exactly two positive factors: 1 and itself.

Any positive divisor of

is a product of prime divisors of

raised to some power. This is a consequence of the fundamental theorem of arithmetic.

, and abundant if this sum exceeds

The total number of positive divisors of

is a multiplicative function

, meaning that when two numbers

are relatively prime, then

. The sum of the positive divisors of

is another multiplicative function

). Both of these functions are examples of divisor functions.

{{safesubst:#invoke:anchor|main}} If the prime factorization of

then the number of positive divisors of

and each of the divisors has the form

is Euler–Mascheroni constant. One interpretation of this result is that a randomly chosen positive integer n has an expected number of divisors of about

Given the definition for which

holds, the relation of divisibility turns the set

of non-negative integers into a partially ordered set: a complete distributive lattice. The largest element of this lattice is 0 and the smallest is 1. The meet operation ∧ is given by the greatest common divisor and the join operation ∨ by the least common multiple. This lattice is isomorphic to the dual of the lattice of subgroups of the infinite cyclic group