Animation of a net of a dodecahedron being folded

In geometry, a dodecahedron (Greek δωδεκάεδρον, from δώδεκα dōdeka "twelve" + ἕδρα hédra "base", "seat" or "face") is any polyhedron with twelve flat faces, but usually a regular dodecahedron is meant, which is one of the five Platonic solids. It is composed of twelve regular pentagonal faces, with three meeting at each vertex, and is represented by the Schläfli symbol {5,3}. It has 20 vertices, 30 edges and 160 diagonals. Its dual polyhedron is the icosahedron, with Schläfli symbol {3,5}.

If the edge length of a regular dodecahedron is a, the radius of a circumscribed sphere (one that touches the dodecahedron at all vertices) is

while the midradius, which touches the middle of each edge, is

These quantities may also be expressed as

where φ is the golden ratio.

The surface area A and the volume V of a regular dodecahedron of edge length a are:

The dodecahedron has two special orthogonal projections, centered, on vertices and pentagonal faces, correspond to the A2 and H2 Coxeter planes.

In perspective projection, viewed above a pentagonal face, the dodecahedron can be seen as a linear-edged schlegel diagram, or stereographic projection as a spherical polyhedron. These projections are also used in showing the four-dimensional 120-cell, a regular 4-dimensional polytope, constructed from 120 dodecahedra, projecting it down to 3-dimensions.

The dodecahedron can also be represented as a spherical tiling. 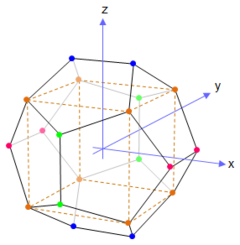 The following Cartesian coordinates define the vertices of a dodecahedron centered at the origin and suitably scaled and oriented:[1]

Space filling with cube and bilunabirotunda

The regular dodecahedron is the third in an infinite set of truncated trapezohedra which can be constructed by truncating the two axial vertices of a pentagonal trapezohedron.

The stellations of the dodecahedron make up three of the four Kepler–Poinsot polyhedra.

The regular dodecahedron has icosahedral symmetry Ih, Coxeter group [5,3], order 120, with an abstract group structure of A5 × Z2.

When a dodecahedron is inscribed in a sphere, it occupies more of the sphere's volume (66.49%) than an icosahedron inscribed in the same sphere (60.54%).

A regular dodecahedron has 12 faces and 20 vertices, whereas a regular icosahedron has 20 faces and 12 vertices. Both have 30 edges.

A cube can embed within a regular dodecahedron, affixed to eight of its equidistant vertices, in five different positions.[4] In fact, five cubes may overlap and interlock inside the dodecahedron to result in the compound of five cubes.

Thus, the difference in volume between the encompassing dodecahedron and the enclosed cube is always one half the volume of the cube times φ (i.e., the golden mean).

From these ratios derive simple formulas for a regular dodecahedron's volume of edge length a using the golden mean:

Golden ratio rectangles of ratio φ + 1 : 1 and φ to 1 also fit perfectly within a regular dodecahedron.[5] In proportion to this golden rectangle, an enclosed cube's edge is φ, when the long length of the rectangle is φ + 1 (or φ2) and the short length is 1 (the edge shared with the dodecahedron).

In addition, the center of each face of the dodecahedron form three intersecting golden rectangles.[6]

The regular dodecahedron is topologically related to a series of tilings by vertex figure n3. Template:Order-3 tiling table

The dodecahedron can be transformed by a truncation sequence into its dual, the icosahedron: Template:Icosahedral truncations

The regular dodecahedron is a member of a sequence of otherwise non-uniform polyhedra and tilings, composed of pentagons with face configurations (V3.3.3.3.n). (For n > 6, the sequence consists of tilings of the hyperbolic plane.) These face-transitive figures have (n32) rotational symmetry. Template:Snub table

Five cubes fit within, with their edges as diagonals of the dodecahedron's faces, and together these make up the regular polyhedral compound of five cubes. Since two tetrahedra can fit on alternate cube vertices, five and ten tetrahedra can also fit in a dodecahedron.

The 3 stellations of the dodecahedron are all regular (nonconvex) polyhedra: (Kepler–Poinsot polyhedra)

Template:Infobox graph The skeleton of the dodecahedron (the vertices and edges) form a graph. It is one of 5 Platonic graphs, each a skeleton of its Platonic solid.

This graph can also be constructed as the generalized Petersen graph G(10, 2). The high degree of symmetry of the polygon is replicated in the properties of this graph, which is distance-transitive, distance-regular, and symmetric. The automorphism group has order 120. The vertices can be colored with 3 colors, as can the edges, and the diameter is 5.[7]

The dodecahedral graph is Hamiltonian—there is a cycle containing all the vertices. Indeed, this name derives from a mathematical game invented in 1857 by William Rowan Hamilton, the icosian game. The game's object was to find a Hamiltonian cycle along the edges of a dodecahedron.

A pyritohedron is a dodecahedron with pyritohedral (Th) symmetry. Like the regular dodecahedron, it has twelve identical pentagonal faces, with three meeting in each of the 20 vertices. However, the pentagons are not necessarily regular, so the structure normally has no fivefold symmetry axes. Its 30 edges are divided into two sets – containing 24 and 6 edges of the same length.

Although regular dodecahedra do not exist in crystals, the distorted, pyritohedron form occurs in the crystal pyrite, and it may be an inspiration for the discovery of the regular Platonic solid form.

Its name comes from one of the two common crystal forms of pyrite, the other one being cubical.

The coordinates of the eight vertices of the original cube are:

The coordinates of the 12 vertices of the cross-edges are:

where h is the height of the wedge-shaped "roof" above the faces of the cube. When h = 1, the six cross-edges degenerate to points and a rhombic dodecahedron is formed. When h = 0, the cross-edges are absorbed in the facets of the cube, and the pyritohedron reduces to a cube. When h = (√5 − 1)/2, the inverse of the golden ratio, the original edges of the cube are absorbed in the facets of the wedges, which become co-planar, resulting in a regular dodecahedron.

The pyritohedron has a geometric degree of freedom with limiting cases of a cubic convex hull at one limit of colinear edges, and a rhombic dodecahedron as the other limit as 6 edges are degenerated to length zero. The regular dodecahedron represents a special intermediate case where all edges and angles are equal.

The rhombic dodecahedron has several stellations, the first of which is also a spacefiller.

There are 6,384,634 topologically distinct convex dodecahedra, excluding mirror images, having at least 8 vertices.[12] (Two polyhedra are "topologically distinct" if they have intrinsically different arrangements of faces and vertices, such that it is impossible to distort one into the other simply by changing the lengths of edges or the angles between edges or faces.)

Dodecahedral objects have found some practical applications, and have also played a role in the visual arts and in philosophy.

Iamblichus states that Hippasus, a Pythagorean, perished in the sea, because he boasted that he first divulged "the sphere with the twelve pentagons." [13] In Theaetetus, a dialogue of Plato, Plato was able to prove that there are just five uniform regular solids; they later became known as the platonic solids. Timaeus (c. 360 B.C.), as a personage of Plato's dialogue, associates the other four platonic solids with the four classical elements, adding that there is a fifth solid pattern which, though commonly associated with the dodecahedron, is never directly mentioned as such; "this God used in the delineation of the universe."[14] Aristotle also postulated that the heavens were made of a fifth element, which he called aithêr (aether in Latin, ether in American English).

Dodecahedra have been used as dice and probably also as divinatory devices. During the hellenistic era, small, hollow bronze Roman dodecahedra were made and have been found in various Roman ruins in Europe. Their purpose is not certain.

In 20th-century art, dodecahedra appear in the work of M.C. Escher, such as his lithographs Reptiles (1943) and Gravitation (1952). In Salvador Dalí's painting The Sacrament of the Last Supper (1955), the room is a hollow dodecahedron.

In modern role-playing games, the dodecahedron is often used as a twelve-sided die, one of the more common polyhedral dice. Some quasicrystals have dodecahedral shape (see figure). Some regular crystals such as garnet and diamond are also said to exhibit "dodecahedral" habit, but this statement actually refers to the rhombic dodecahedron shape.[8]

Immersive media, a Camera manufacturing company, has made the Dodeca 2360 camera, the world's first 360°, full motion camera which captures high-resolution video from every direction simultaneously at more than 100 million pixels per second or 30 frames per second. It is based on dodecahedron.

The popular puzzle game Megaminx is in the shape of a dodecahedron.

In the children's novel The Phantom Tollbooth, the Dodecahedron appears as a character in the land of Mathematics. Each of his faces wears a different expression—e.g. happy, angry, sad—which he swivels to the front as required to match his mood.

Dodecahedron is the name of an avant-garde black metal band from Netherlands.[15]

{{safesubst:#invoke:anchor|main}} Shape of the universe

Various models have been proposed for the global geometry of the universe. In addition to the primitive geometries, these proposals include the Poincaré dodecahedral space, a positively curved space consisting of a dodecahedron whose opposite faces correspond (with a small twist). This was proposed by Jean-Pierre Luminet and colleagues in 2003[16][17] and an optimal orientation on the sky for the model was estimated in 2008.[18]

In Bertrand Russell's 1954 short story "THE MATHEMATICIAN'S NIGHTMARE: The Vision of Professor Squarepunt," the number 5 said: "I am the number of fingers on a hand. I make pentagons and pentagrams. And but for me dodecahedra could not exist; and, as everyone knows, the universe is a dodecahedron. So, but for me, there could be no universe."