Domain of a function 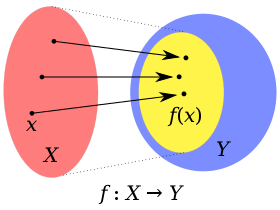 Illustration showing f, a function from pink domain X to blue and yellow codomain Y. The smaller yellow oval inside Y is the image of f. Either the image or the codomain also sometimes is called the range of f.

Given a function f:X→Y, the set X is the domain of f; the set Y is the codomain of f. In the expression f(x), x is the argument and f(x) is the value. One can think of an argument as an input to the function, and the value as the output.

The image (sometimes called the range) of f is the set of all values assumed by f for all possible x; this is the set Template:Nowrap begin{f(x) | x ∈ X}Template:Nowrap end. The image of f can be the same set as the codomain or it can be a proper subset of it. It is, in general, smaller than the codomain; it is the whole codomain if and only if f is a surjective function.

has no value for f(0). Thus, the set of all real numbers, R, cannot be its domain. In cases like this, the function is either defined on R−{0} or the "gap is plugged" by explicitly defining f(0). If we extend the definition of f to

then f is defined for all real numbers, and its domain is

Domain of a partial function

Template:Further2 There are two distinct meanings in current mathematical usage for the notion of the domain of a partial function from X to Y, i.e. a function from a subset X' of X to Y. Most mathematicians, including recursion theorists, use the term "domain of f" for the set X' of all values x such that f(x) is defined. But some, particularly category theorists, consider the domain to be X, irrespective of whether f(x) exists for every x in X.

In category theory one deals with morphisms instead of functions. Morphisms are arrows from one object to another. The domain of any morphism is the object from which an arrow starts. In this context, many set theoretic ideas about domains must be abandoned or at least formulated more abstractly. For example, the notion of restricting a morphism to a subset of its domain must be modified. See subobject for more.

In real and complex analysis, a domain is an open connected subset of a real or complex vector space.

In partial differential equations, a domain is an open connected subset of the euclidean space Rn, where the problem is posed, i.e., where the unknown function(s) are defined.