In physics and mathematics, in the area of dynamical systems, a double pendulum is a pendulum with another pendulum attached to its end, and is a simple physical system that exhibits rich dynamic behavior with a strong sensitivity to initial conditions.[1] The motion of a double pendulum is governed by a set of coupled ordinary differential equations. For certain energies its motion is chaotic.

Several variants of the double pendulum may be considered; the two limbs may be of equal or unequal lengths and masses, they may be simple pendulums or compound pendulums (also called complex pendulums) and the motion may be in three dimensions or restricted to the vertical plane. In the following analysis, the limbs are taken to be identical compound pendulums of length

, and the motion is restricted to two dimensions. 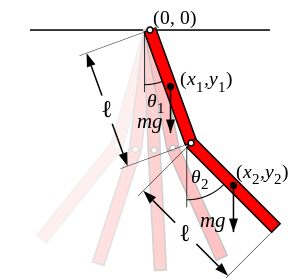 In a compound pendulum, the mass is distributed along its length. If the mass is evenly distributed, then the center of mass of each limb is at its midpoint, and the limb has a moment of inertia of

and the center of mass of the second pendulum is at

This is enough information to write out the Lagrangian.

Substituting the coordinates above and rearranging the equation gives

Trajectories of a double pendulum 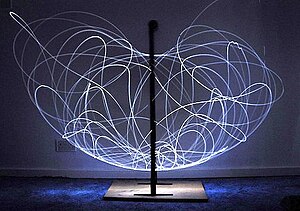 There is only one conserved quantity (the energy), and no conserved momenta. The two momenta may be written as

These expressions may be inverted to get

The remaining equations of motion are written as

These last four equations are explicit formulae for the time evolution of the system given its current state. It is not possible to go further and integrate these equations analytically, to get formulae for θ1 and θ2 as functions of time. It is however possible to perform this integration numerically using the Runge Kutta method or similar techniques.

The double pendulum undergoes chaotic motion, and shows a sensitive dependence on initial conditions. The image to the right shows the amount of elapsed time before the pendulum "flips over," as a function of initial conditions. Here, the initial value of θ1 ranges along the x-direction, from −3 to 3. The initial value θ2 ranges along the y-direction, from −3 to 3. (Presumably, this exposition is describing a stationary release with kinetic terms at zero.) The colour of each pixel indicates whether either pendulum flips within

(blue). Initial conditions that don't lead to a flip within

The boundary of the central white region is defined in part by energy conservation with the following curve:

Within the region defined by this curve, that is if

then it is energetically impossible for either pendulum to flip. Outside this region, the pendulum can flip, but it is a complex question to determine when it will flip. Similar behavior is observed for a double pendulum composed of two point masses rather than two rods with distributed mass.[2]

The lack of a natural excitation frequency has led to the use of double pendulum systems in seismic resistance designs in buildings, where the building itself is the primary inverted pendulum, and a secondary mass is connected to complete the double pendulum.