In fluid dynamics, drag (sometimes called air resistance, a type of friction, or fluid resistance, another type of friction or fluid friction) refers to forces acting opposite to the relative motion of any object moving with respect to a surrounding fluid. This can exist between two fluid layers (or surfaces) or a fluid and a solid surface. Unlike other resistive forces, such as dry friction, which are nearly independent of velocity, drag forces depend on velocity.[1][2] Drag force is proportional to the velocity for a laminar flow and for a squared velocity for a turbulent flow. Even though the ultimate cause of a drag is viscous friction, the turbulent drag is independent of viscosity [3]

Examples of drag include the component of the net aerodynamic or hydrodynamic force acting opposite to the direction of movement of the solid object relative to the Earth as for cars, aircraft[2] and boat hulls; or acting in the same geographical direction of motion as the solid, as for sails attached to a down wind sail boat, or in intermediate directions on a sail depending on points of sail.[4][5][6][7] In the case of viscous drag of fluid in a pipe, drag force on the immobile pipe decreases fluid velocity relative to the pipe.[8][9]

Types of drag are generally divided into the following categories:

The phrase parasitic drag is mainly used in aerodynamics, since for lifting wings drag is in general small compared to lift. For flow around bluff bodies, drag is most often dominating, and then the qualifier "parasitic" is meaningless.Template:Fact Form drag, skin friction and interference drag on bluff bodies are not coined as being elements of "parasitic drag", but directly as elements of drag.

Further, lift-induced drag is only relevant when wings or a lifting body are present, and is therefore usually discussed either in the aviation perspective of drag, or in the design of either semi-planing or planing hulls. Wave drag occurs when a solid object is moving through a fluid at or near the speed of sound in that fluid—or in case there is a freely-moving fluid surface with surface waves radiating from the object, e.g. from a ship.

Drag coefficient Cd for a sphere as a function of Reynolds number Re, as obtained from laboratory experiments. The solid line is for a sphere with a smooth surface, while the dashed line is for the case of a rough surface.

Drag depends on the properties of the fluid and on the size, shape, and speed of the object. One way to express this is by means of the drag equation:

FD is the drag force,

is the density of the fluid,[10]
v is the speed of the object relative to the fluid,
A is the cross sectional area, and
CD is the drag coefficient – a dimensionless number.

The drag coefficient depends on the shape of the object and on the Reynolds number:

where D is some characteristic diameter or linear dimension and

For high velocities (or more precisely, at high Reynolds number) drag will vary as the square of velocity. Thus, the resultant power needed to overcome this drag will vary as the cube of velocity. The standard equation for drag is one half the coefficient of drag multiplied by the fluid mass density, the cross sectional area of the specified item, and the square of the velocity.

Wind resistance is a layman's term for drag.Template:Fact Its use is often vague, and is usually used in a relative sense (e.g. a badminton shuttlecock has more wind resistance than a squash ball).

{{#invoke:main|main}} File:194144main 022 drag.ogg As mentioned, the drag equation with a constant drag coefficient gives the force experienced by an object moving through a fluid at relatively large velocity (i.e. high Reynolds number, Re > ~1000). This is also called quadratic drag. The equation is attributed to Lord Rayleigh, who originally used L2 in place of A (L being some length).

The reference area A is often orthographic projection of the object—on a plane perpendicular to the direction of motion—e.g. for objects with a simple shape, such as a sphere, this is the cross sectional area. Sometimes different reference areas are given for the same object in which case a drag coefficient corresponding to each of these different areas must be given.

The power required to overcome the aerodynamic drag is given by:

Velocity of a falling object

File:Speed vs time for objects with drag.png
An object falling through viscous medium accelerates quickly towards its terminal speed, approaching gradually as the speed gets nearer to the terminal speed. Whether the object experiences turbulent or laminar drag changes the characteristic shape of the graph with turbulent flow resulting in a constant acceleration for a larger fraction of its accelerating time.

The velocity as a function of time for an object falling through a non-dense medium, and released at zero relative-velocity v = 0 at time t = 0, is roughly given by a function involving a hyperbolic tangent (tanh):

The hyperbolic tangent has a limit value of one, for large time t. In other words, velocity asymptotically approaches a maximum value called the terminal velocity vt:

For a potato-shaped object of average diameter d and of density ρobj, terminal velocity is about

For objects of water-like density (raindrops, hail, live objects—mammals, birds, insects, etc.) falling in air near the surface of the Earth at sea level, terminal velocity is roughly equal to

with d in metre and vt in m/s. For example, for a human body (

~ 9 m/s, and so on. Terminal velocity for very small objects (pollen, etc.) at low Reynolds numbers is determined by Stokes law.

Trajectories of three objects thrown at the same angle (70°). The black object does not experience any form of drag and moves along a parabola. The blue object experiences Stokes' drag, and the green object Newton drag.

{{#invoke:main|main}} The equation for viscous resistance or linear drag is appropriate for objects or particles moving through a fluid at relatively slow speeds where there is no turbulence (i.e. low Reynolds number,

).[16] Note that purely laminar flow only exists up to Re = 0.1 under this definition. In this case, the force of drag is approximately proportional to velocity, but opposite in direction. The equation for viscous resistance is:[17]

is a constant that depends on the properties of the fluid and the dimensions of the object, and

is the velocity of the object

When an object falls from rest, its velocity will be

which asymptotically approaches the terminal velocity

For the special case of small spherical objects moving slowly through a viscous fluid (and thus at small Reynolds number), George Gabriel Stokes derived an expression for the drag constant:

is the Stokes radius of the particle, and

is the fluid viscosity.

The resulting expression for the drag is known as Stokes' drag:[18]

For example, consider a small sphere with radius

of 10 µm/s. Using 10−3 Pa·s as the dynamic viscosity of water in SI units, we find a drag force of 0.09 pN. This is about the drag force that a bacterium experiences as it swims through water.

Lift-induced drag (also called induced drag) is drag which occurs as the result of the creation of lift on a three-dimensional lifting body, such as the wing or fuselage of an airplane. Induced drag consists of two primary components, including drag due to the creation of vortices (vortex drag) and the presence of additional viscous drag (lift-induced viscous drag). The vortices in the flow-field, present in the wake of a lifting body, derive from the turbulent mixing of air of varying pressure on the upper and lower surfaces of the body, which is a necessary condition for the creation of lift.

Parasitic drag (also called parasite drag) is drag caused by moving a solid object through a fluid. Parasitic drag is made up of multiple components including viscous pressure drag (form drag), and drag due to surface roughness (skin friction drag). Additionally, the presence of multiple bodies in relative proximity may incur so called interference drag, which is sometimes described as a component of parasitic drag.

In aviation, induced drag tends to be greater at lower speeds because a high angle of attack is required to maintain lift, creating more drag. However, as speed increases the induced drag becomes much less, but parasitic drag increases because the fluid is flowing more quickly around protruding objects increasing friction or drag. At even higher speeds in the transonic, wave drag enters the picture. Each of these forms of drag changes in proportion to the others based on speed. The combined overall drag curve therefore shows a minimum at some airspeed - an aircraft flying at this speed will be at or close to its optimal efficiency. Pilots will use this speed to maximize endurance (minimum fuel consumption), or maximize gliding range in the event of an engine failure.

The power curve: form and induced drag vs. airspeed

The interaction of parasitic and induced drag vs. airspeed can be plotted as a characteristic curve, illustrated here. In aviation, this is often referred to as the power curve, and is important to pilots because it shows that, below a certain airspeed, maintaining airspeed counterintuitively requires more thrust as speed decreases, rather than less. The consequences of being "behind the curve" in flight are important and are taught as part of pilot training. At the subsonic airspeeds where the "U" shape of this curve is significant, wave drag has not yet become a factor, and so it is not shown in the curve. 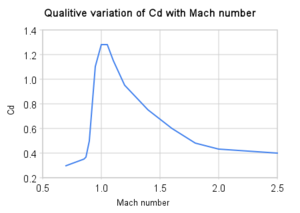 Qualitative variation in Cd factor with Mach number for aircraft

{{#invoke:main|main}} Wave drag (also called compressibility drag) is drag which is created by the presence of a body moving at high speed through a compressible fluid. In aerodynamics, Wave drag consists of multiple components depending on the speed regime of the flight.

In transonic flight (Mach numbers greater than about 0.8 and less than about 1.4), wave drag is the result of the formation of shockwaves on the body, formed when areas of local supersonic (Mach number greater than 1.0) flow are created. In practice, supersonic flow occurs on bodies traveling well below the speed of sound, as the local speed of air on a body increases when it accelerates over the body, in this case above Mach 1.0. However, full supersonic flow over the vehicle will not develop until well past Mach 1.0. Aircraft flying at transonic speed often incur wave drag through the normal course of operation. In transonic flight, wave drag is commonly referred to as transonic compressibility drag. Transonic compressibility drag increases significantly as the speed of flight increases towards Mach 1.0, dominating other forms of drag at these speeds.

The closed form solution for the minimum wave drag of a body of revolution with a fixed length was found by Sears and Haack, and is known as the Sears-Haack Distribution. Similarly, for a fixed volume, the shape for minimum wave drag is the Von Karman Ogive.

Busemann's Biplane is not, in principle, subject to wave drag at all when operated at its design speed, but is incapable of generating lift.

In 1752 d'Alembert proved that potential flow, the 18th century state-of-the-art inviscid flow theory amenable to mathematical solutions, resulted in the prediction of zero drag. This was in contradiction with experimental evidence, and became known as d'Alembert's paradox. In the 19th century the Navier–Stokes equations for the description of viscous flow were developed by Saint-Venant, Navier and Stokes. Stokes derived the drag around a sphere at very low Reynolds numbers, the result of which is called Stokes law.[21]

The notion of boundary layers—introduced by Prandtl in 1904, founded on both theory and experiments—explained the causes of drag at high Reynolds numbers. The boundary layer is the thin layer of fluid close to the object's boundary, where viscous effects remain important when the viscosity becomes very small (or equivalently the Reynolds number becomes very large).[21]