{{#invoke:Hatnote|hatnote}} Earth radius is the distance from Earth's center to its surface, about Template:Convert. This length is also used as a unit of distance, especially in astronomy and geology, where it is usually denoted by

This article deals primarily with spherical and ellipsoidal models of the Earth. See Figure of the Earth for a more complete discussion of models. The Earth is only approximately spherical, so no single value serves as its natural radius. Distances from points on the surface to the center range from 6,353 km to 6,384 km (3,947–3,968 mi). Several different ways of modeling the Earth as a sphere each yield a mean radius of Template:Convert.

While "radius" normally is a characteristic of perfect spheres, the term as used in this article more generally means the distance from some "center" of the Earth to a point on the surface or on an idealized surface that models the Earth. It can also mean some kind of average of such distances, or of the radius of a sphere whose curvature matches the curvature of the ellipsoidal model of the Earth at a given point.

The first scientific estimation of the radius of the earth was given by Eratosthenes about 240 BC. Estimates of the accuracy of Eratosthenes’s measurement range from within 2% to within 15%.

Earth's rotation, internal density variations, and external tidal forces cause it to deviate systematically from a perfect sphere.[lower-alpha 1] Local topography increases the variance, resulting in a surface of unlimited complexity. Our descriptions of the Earth's surface must be simpler than reality in order to be tractable. Hence we create models to approximate the Earth's surface, generally relying on the simplest model that suits the need.

Each of the models in common use come with some notion of "radius". Strictly speaking, spheres are the only solids to have radii, but looser uses of the term "radius" are common in many fields, including those dealing with models of the Earth. Viewing models of the Earth from less to more approximate:

Regardless of model, any radius falls between the polar minimum of about 6,357 km and the equatorial maximum of about 6,378 km (≈3,950 – 3,963 mi). Hence the Earth deviates from a perfect sphere by only a third of a percent, sufficiently close to treat it as a sphere in many contexts and justifying the term "the radius of the Earth". While specific values differ, the concepts in this article generalize to any major planet.

Rotation of a planet causes it to approximate an oblate ellipsoid/spheroid with a bulge at the equator and flattening at the North and South Poles, so that the equatorial radius

is larger than the polar radius

where the oblateness constant

is the angular frequency,

is the gravitational constant, and

is the mass of the planet.Template:Refn For the Earth q−1 ≈ 289, which is close to the measured inverse flattening f−1 ≈ 298.257. Additionally, the bulge at the equator shows slow variations. The bulge had been declining, but since 1998 the bulge has increased, possibly due to redistribution of ocean mass via currents.[1]

Not all deformations originate within the Earth. The gravity of the Moon and Sun cause the Earth's surface at a given point to undulate by tenths of meters over a nearly 12 hour period (see Earth tide). 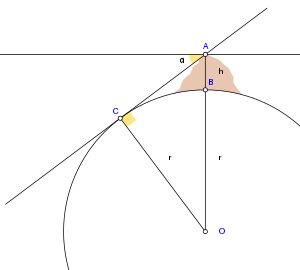 Given local and transient influences on surface height, the values defined below are based on a "general purpose" model, refined as globally precisely as possible within 5 m of reference ellipsoid height, and to within 100 m of mean sea level (neglecting geoid height).

Additionally, the radius can be estimated from the curvature of the Earth at a point. Like a torus the curvature at a point will be largest (tightest) in one direction (North-South on Earth) and smallest (flattest) perpendicularly (East-West). The corresponding radius of curvature depends on location and direction of measurement from that point. A consequence is that a distance to the true horizon at the equator is slightly shorter in the north/south direction than in the east-west direction.

In summary, local variations in terrain prevent the definition of a single absolutely "precise" radius. One can only adopt an idealized model. Since the estimate by Eratosthenes, many models have been created. Historically these models were based on regional topography, giving the best reference ellipsoid for the area under survey. As satellite remote sensing and especially the Global Positioning System rose in importance, true global models were developed which, while not as accurate for regional work, best approximate the earth as a whole.

The following radii are fixed and do not include a variable location dependence. They are derived from the WGS-84 ellipsoid.[3]

The radii in this section are for an idealized surface. Even the idealized radii have an uncertainty of ± 2 meters.[4] The discrepancy between the ellipsoid radius and the radius to a physical location may be significant. When identifying the position of an observable location, the use of more precise values for WGS-84 radii may not yield a corresponding improvement in accuracy.

The symbol given for the named radius is used in the formulae found in this article.

, or semi-major axis, is the distance from its center to the equator and equals Template:Convert. The equatorial radius is often used to compare Earth with other planets.

, or semi-minor axis, is the distance from its center to the North and South Poles, and equals Template:Convert.

are the equatorial radius and the polar radius, respectively.

This is the radius that Eratosthenes measured.

If one point had appeared due east of the other, one finds the approximate curvature in east-west direction.[lower-alpha 5]

This radius of curvature in the prime vertical, which is perpendicular, or normal, to M at geodetic latitude

Note that N=R at the equator:

The Earth's meridional radius of curvature at the equator equals the meridian's semi-latus rectum:

The Earth's polar radius of curvature is:

It is possible to combine the meridional and normal radii of curvature above.

The Earth's Gaussian radius of curvature at latitude

is derived from Euler's curvature formula as follows:[6]

The Earth's mean radius of curvature at latitude

The Earth can be modeled as a sphere in many ways. This section describes the common ways. The various radii derived here use the notation and dimensions noted above for the Earth as derived from the WGS-84 ellipsoid;[3] namely,

For Earth, the mean radius is Template:Convert.[8]

{{#invoke:see also|seealso}} Earth's authalic ("equal area") radius is the radius of a hypothetical perfect sphere which has the same surface area as the reference ellipsoid. The IUGG denotes the authalic radius as

A closed-form solution exists for a spheroid:[9]

is the surface area of the spheroid.

For Earth, the authalic radius is Template:Convert.[8]

{{#invoke:see also|seealso}} Another mean radius is the rectifying radius, giving a sphere with circumference equal to the perimeter of the ellipse described by any polar cross section of the ellipsoid. This requires an elliptic integral to find, given the polar and equatorial radii:

The rectifying radius is equivalent to the meridional mean, which is defined as the average value of M:[9]

For integration limits of [0...π/2], the integrals for rectifying radius and mean radius evaluate to the same result, which, for Earth, amounts to Template:Convert.

The meridional mean is well approximated by the semicubic mean of the two axes:

The best spherical approximation to the ellipsoid in the vicinity of a given point is given by the osculating sphere. Its radius equals the Gaussian radius of curvature as above, and its radial direction coincides with the ellipsoid normal direction. This concept aids the interpretation of terrestrial and planetary radio occultation refraction measurements.