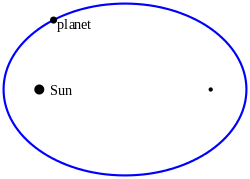 A small body in space orbits a large one (like a planet around the sun) along an elliptical path, with the large body being located at one of the ellipse foci.

Two bodies with similar mass orbiting around a common barycenter with elliptic orbits. 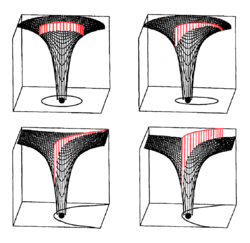 An elliptical orbit is depicted in the top-right quadrant of this diagram, where the gravitational potential well of the central mass shows potential energy, and the kinetic energy of the orbital speed is shown in red. The height of the kinetic energy decreases as the orbiting body's speed decreases and distance increases according to Kepler's laws.

In a gravitational two-body problem with negative energy both bodies follow similar elliptic orbits with the same orbital period around their common barycenter. Also the relative position of one body with respect to the other follows an elliptic orbit.

Under standard assumptions the orbital speed (

) of a body traveling along an elliptic orbit can be computed from the Vis-viva equation as:

The velocity equation for a hyperbolic trajectory has either +

, or it is the same with the convention that in that case a is negative.

Under standard assumptions the orbital period (

) of a body traveling along an elliptic orbit can be computed as:

) of elliptic orbit is negative and the orbital energy conservation equation (the Vis-viva equation) for this orbit can take the form:

Using the virial theorem we find:

The state of an orbiting body at any given time is defined by the orbiting body's position and velocity with respect to the central body, which can be represented by the three-dimensional Cartesian coordinates (position of the orbiting body represented by x, y, and z) and the similar Cartesian components of the orbiting body's velocity. This set of six variables, together with time, are called the orbital state vectors. Given the masses of the two bodies they determine the full orbit. The two most general cases with these 6 degrees of freedom are the elliptic and the hyperbolic orbit. Special cases with fewer degrees of freedom are the circular and parabolic orbit.

In the Solar System, planets, asteroids, most comets and some pieces of space debris have approximately elliptical orbits around the Sun. Strictly speaking, both bodies revolve around the same focus of the ellipse, the one closer to the more massive body, but when one body is significantly more massive, such as the sun in relation to the earth, the focus may be contained within the larger massing body, and thus the smaller is said to revolve around it. The following chart of the perihelion and aphelion of the planets, dwarf planets and Halley's Comet demonstrates the variation of the eccentricity of their elliptical orbits. For similar distances from the sun, wider bars denote greater eccentricity. Note the almost-zero eccentricity of Earth and Venus compared to the enormous eccentricity of Halley's Comet and Eris. Template:Distance from Sun using EasyTimeline

A radial trajectory can be a double line segment, which is a degenerate ellipse with semi-minor axis = 0 and eccentricity = 1. Although the eccentricity is 1, this is not a parabolic orbit. Most properties and formulas of elliptic orbits apply. However, the orbit cannot be closed. It is an open orbit corresponding to the part of the degenerate ellipse from the moment the bodies touch each other and move away from each other until they touch each other again. In the case of point masses one full orbit is possible, starting and ending with a singularity. The velocities at the start and end are infinite in opposite directions and the potential energy is equal to minus infinity.

The radial elliptic trajectory is the solution of a two-body problem with at some instant zero speed, as in the case of dropping an object (neglecting air resistance).

Several civilizations such as Babylonian and Indians had observed since the first millennium B.C.E. that the Sun's motion along the ecliptic was not uniform, though they were unaware of why this was; it is today known that this is due to the Earth moving in an elliptic orbit around the Sun, with the Earth moving faster when it is nearer to the Sun at perihelion and moving slower when it is farther away at aphelion.[1]

In the 17th century, Johannes Kepler discovered that the orbits along which the planets travel around the Sun are ellipses with the Sun at one focus, and described this in his first law of planetary motion. Later, Isaac Newton explained this as a corollary of his law of universal gravitation.