Energy density is the amount of energy stored in a given system or region of space per unit volume or mass, though the latter is more accurately termed specific energy. Often only the useful or extractable energy is measured, which is to say that chemically inaccessible energy such as rest mass energy is ignored.[1] In cosmological and other general relativistic contexts, however, the energy densities considered are those that correspond to the elements of the stress–energy tensor and therefore do include mass energy as well as energy densities associated with the pressures described in the next paragraph.

Energy per unit volume has the same physical units as pressure, and in many circumstances is a synonym: for example, the energy density of a magnetic field may be expressed as (and behaves as) a physical pressure, and the energy required to compress a compressed gas a little more may be determined by multiplying the difference between the gas pressure and the external pressure by the change in volume. In short, pressure is a measure of the enthalpy per unit volume of a system. A pressure gradient has a potential to perform work on the surroundings by converting enthalpy until equilibrium is reached.

There are many different types of energy stored in materials, and it takes a particular type of reaction to release each type of energy. In order of the typical magnitude of the energy released, these types of reactions are: nuclear, chemical, electrochemical, and electrical.

{{ safesubst:#invoke:Unsubst||$N=Unreferenced section |date=__DATE__ |$B= {{ safesubst:#invoke:Unsubst||$N=Unreferenced |date=__DATE__ |$B= {{#invoke:Message box|ambox}} }} }} The following is a list of the thermal energy densities of commonly used or well-known energy storage materials; it doesn't include uncommon or experimental materials. Note that this list does not consider the mass of reactants commonly available such as the oxygen required for combustion or the energy efficiency in use.

Energy density in energy storage and in fuel 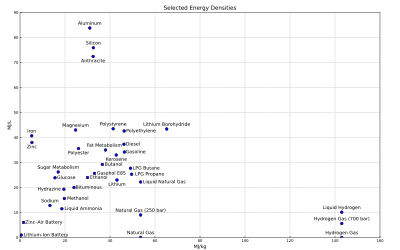 In energy storage applications the energy density relates the mass of an energy store to the volume of the storage facility, e.g. the fuel tank. The higher the energy density of the fuel, the more energy may be stored or transported for the same amount of volume. The energy density of a fuel per unit mass is called the specific energy of that fuel. In general an engine using that fuel will generate less kinetic energy due to inefficiencies and thermodynamic considerations—hence the specific fuel consumption of an engine will always be greater than its rate of production of the kinetic energy of motion.

The greatest energy source by far is mass itself. This energy, E = mc2, where m = ρV, ρ is the mass per unit volume, V is the volume of the mass itself and c is the speed of light. This energy, however, can be released only by the processes of nuclear fission (.1%), nuclear fusion (1%),{{ safesubst:#invoke:Unsubst||date=__DATE__ |$B= {{#invoke:Category handler|main}}{{#invoke:Category handler|main}}[citation needed] }} or the annihilation of some or all of the matter in the volume V by matter-antimatter collisions (100%). Nuclear reactions cannot be realized by chemical reactions such as combustion. Although greater matter densities can be achieved, the density of a neutron star would approximate the most dense system capable of matter-antimatter annihilation possible. A black hole, although denser than a neutron star, does not have an equivalent anti-particle form, but would offer the same 100% conversion rate of mass to energy in the form of Hawking radiation. In the case of relatively small black holes (smaller than astronomical objects) the power output would be tremendous.

The highest density sources of energy aside from antimatter are fusion and fission. Fusion includes energy from the sun which will be available for billions of years (in the form of sunlight) but so far (2011), sustained fusion power production continues to be elusive. Fission of uranium and thorium in nuclear power plants will be available for a long time due to the vast supply of the element on earth,{{ safesubst:#invoke:Unsubst||date=__DATE__ |$B= {{#invoke:Category handler|main}}{{#invoke:Category handler|main}}[citation needed] }} though the full potential of this source can only be realised through breeder reactors, which are, apart from the BN-600 reactor, not yet used commercially.[7] Coal, gas, and petroleum are the current primary energy sources in the U.S.[8] but have a much lower energy density. Burning local biomass fuels supplies household energy needs (cooking fires, oil lamps, etc.) worldwide.

Energy density (how much energy you can carry) does not tell you about energy conversion efficiency (net output per input) or embodied energy (what the energy output costs to provide, as harvesting, refining, distributing, and dealing with pollution all use energy). Like any process occurring on a large scale, intensive energy use impacts the world. For example, climate change, nuclear waste storage, and deforestation may be some of the consequences of supplying our growing energy demands from carbohydrate fuels, nuclear fission, or biomass.

Gravimetric and volumetric energy density of some fuels and storage technologies (modified from the Gasoline article):

Note: Some values may not be precise because of isomers or other irregularities. See Heating value for a comprehensive table of specific energies of important fuels.
Note: Also it is important to realise that generally the density values for chemical fuels do not include the weight of oxygen required for combustion. This is typically two oxygen atoms per carbon atom, and one per two hydrogen atoms. The atomic weight of carbon and oxygen are similar, while hydrogen is much lighter than oxygen. Figures are presented this way for those fuels where in practice air would only be drawn in locally to the burner. This explains the apparently lower energy density of materials that already include their own oxidiser (such as gunpowder and TNT), where the mass of the oxidiser in effect adds dead weight, and absorbs some of the energy of combustion to dissociate and liberate oxygen to continue the reaction. This also explains some apparent anomalies, such as the energy density of a sandwich appearing to be higher than that of a stick of dynamite.

This table lists energy densities of systems that require external components, such as oxidisers or a heat sink or source. These figures do not take into account the mass and volume of the required components as they are assumed to be freely available and present in the atmosphere. Such systems cannot be compared with self-contained systems. These values may not be computed at the same reference conditions. Most of them seem to be higher heating value (HHV).

Electric and magnetic fields store energy. In a vacuum, the (volumetric) energy density (in SI units) is given by

where E is the electric field and B is the magnetic field. The solution will be in Joules per cubic metre. In the context of magnetohydrodynamics, the physics of conductive fluids, the magnetic energy density behaves like an additional pressure that adds to the gas pressure of a plasma.

In normal (linear and nondispersive) substances, the energy density (in SI units) is

where D is the electric displacement field and H is the magnetizing field.