A strange attractor which arises when solving a certain differential equation.

There are many types of equations, and they are found in all areas of mathematics; the techniques used to examine them differ according to their type.

Algebra studies two main families of equations: polynomial equations and, among them, linear equations. Polynomial equations have the form P(X) = 0, where P is a polynomial. Linear equations have the form a(x) + b = 0, where a is a linear function and b is a vector. To solve them, one uses algorithmic or geometric techniques, coming from linear algebra or mathematical analysis. Changing the domain of a function can change the problem considerably. Algebra also studies Diophantine equations where the coefficients and solutions are integers. The techniques used are different and come from number theory. These equations are difficult in general; one often searches just to find the existence or absence of a solution, and, if they exist, to count the number of solutions.

The = symbol was invented by Robert Recorde (1510–1558), who considered that nothing could be more equal than parallel straight lines with the same length.

{{#invoke:see also|seealso}} Equations often contain terms other than the unknowns. These other terms, which are assumed to be known, are usually called constants, coefficients or parameters. Usually, the unknowns are denoted by letters at the end of the alphabet, x, y, z, w, …, while coefficients are denoted by letters at the beginning, a, b, c, d, … . For example, the general quadratic equation is usually written ax2 + bx + c = 0. The process of finding the solutions, or in case of parameters, expressing the unknowns in terms of the parameters is called solving the equation. Such expressions of the solutions in terms of the parameters are also called solutions. 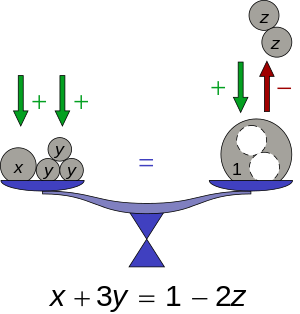 A weighing scale, balance, or seesaw is often presented as an analogy to an equation.

In the illustration, x, y and z are all different quantities (in this case real numbers) represented as circular weights, and each of x, y, and z has a different weight. Addition corresponds to adding weight, while subtraction corresponds to removing weight from what is already there. When equality holds, the total weight on each side is the same.

{{#invoke:main|main}} An identity is a statement resembling an equation which is true for all possible values of the variable(s) it contains. Many identities are known, especially in trigonometry. Probably the best known example is:

, which is true for all values of θ.

In the process of solving an equation, it is often useful to combine it with an identity to produce an equation which is more easily soluble. For example, to solve the equation:

where θ is known to be between zero and 45 degrees,

so the above equation becomes:

Two equations or two systems of equations are equivalent if they have the same set of solutions. The following operations transform an equation or a system into an equivalent one:

If some function is applied to both sides of an equation, the resulting equation has the solutions of the initial equation among its solutions, but may have further solutions called extraneous solutions. For example, the equation

, which not only has the previous solution but also introduces the extraneous solution,

Moreover, If the function is not defined at some values (such as 1/x, which is not defined for x = 0), solutions existing at those values may be lost. Thus, caution must be exercised when applying such a transformation to an equation.

The above transformations are the basis of most elementary methods for equation solving as well as some less elementary ones, like Gaussian elimination.

{{#invoke:main|main}} An algebraic equation or polynomial equation is an equation of the form

is an algebraic equation with integer coefficients and

is a multivariate polynomial equation over the rationals.

Some but not all polynomial equations with rational coefficients have a solution that is an algebraic expression with a finite number of operations involving just those coefficients (that is, can be solved algebraically). This can be done for all such equations of degree one, two, three, or four; but for degree five or more it can only be done for some equations but not for all. A large amount of research has been devoted to compute efficiently accurate approximations of the real or complex solutions of an univariate algebraic equation (see Root-finding algorithm) and of the common solutions of several multivariate polynomial equations (see System of polynomial equations).

The Nine Chapters on the Mathematical Art is an anonymous Chinese book proposing a method of resolution for linear equations.

since it makes all three equations valid. The word "system" indicates that the equations are to be considered collectively, rather than individually.

In mathematics, the theory of linear systems is the basis and a fundamental part of linear algebra, a subject which is used in most parts of modern mathematics. Computational algorithms for finding the solutions are an important part of numerical linear algebra, and play a prominent role in engineering, physics, chemistry, computer science, and economics. A system of non-linear equations can often be approximated by a linear system (see linearization), a helpful technique when making a mathematical model or computer simulation of a relatively complex system.

A conic section is the intersection of a plane and a cone of revolution.

In Euclidean geometry, it is possible to associate a set of coordinates to each point in space, for example by an orthogonal grid. This method allows one to characterize geometric figures by equations. A plane in three-dimensional space can be expressed as the solution set of an equation of the form

are real numbers and

are the unknowns which correspond to the coordinates of a point in the system given by the orthogonal grid. The values

are the coordinates of a vector perpendicular to the plane defined by the equation. A line is expressed as the intersection of two planes, that is as the solution set of a single linear equation with values in

A conic section is the intersection of a cone with equation

and a plane. In other words, in space, all conics are defined as the solution set of an equation of a plane and of the equation of a plane just given. This formalism allows one to determine the positions and the properties of the focuses of a conic.

The use of equations allows one to call on a large area of mathematics to solve geometric questions. The cartesian coordinate system transforms a geometric problem into an analysis problem, once the figures are transformed into equations; thus the name analytic geometry. This point of view, outlined by Descartes, enriches and modifies the type of geometry conceived of by the ancient Greek mathematicians.

Currently, analytic geometry designates an active branch of mathematics. Although it still uses equation to characterize figures, it also uses other sophisticated techniques such as functional analysis and linear algebra.

A Cartesian coordinate system is a coordinate system that specifies each point uniquely in a plane by a pair of numerical coordinates, which are the signed distances from the point to two fixed perpendicular directed lines, measured in the same unit of length. 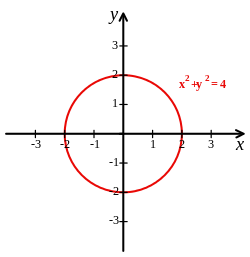 Cartesian coordinate system with a circle of radius 2 centered at the origin marked in red. The equation of a circle is (x − a)2 + (y − b)2 = r2 where a and b are the coordinates of the center (a, b) and r is the radius.

The invention of Cartesian coordinates in the 17th century by René Descartes (Latinized name: Cartesius) revolutionized mathematics by providing the first systematic link between Euclidean geometry and algebra. Using the Cartesian coordinate system, geometric shapes (such as curves) can be described by Cartesian equations: algebraic equations involving the coordinates of the points lying on the shape. For example, a circle of radius 2 in a plane may be described as the set of all points whose coordinates x and y satisfy the equation x2 + y2 = 4.

{{#invoke:main|main}} A parametric equation for a curve expresses the coordinates of the points of the curve as functions of a variable, called a parameter.[4][5] For example,

are parametric equations for the unit circle, where t is the parameter. Together, these equations are called a parametric representation of the curve.

Diophantine problems have fewer equations than unknown variables and involve finding integers that work correctly for all equations. In more technical language, they define an algebraic curve, algebraic surface, or more general object, and ask about the lattice points on it.

{{#invoke:main|main}} An algebraic number is a number that is a root of a non-zero polynomial equation in one variable with rational coefficients (or equivalently — by clearing denominators — with integer coefficients). Numbers such as π that are not algebraic are said to be transcendental. Almost all real and complex numbers are transcendental.

The fundamental objects of study in algebraic geometry are algebraic varieties, which are geometric manifestations of solutions of systems of polynomial equations. Examples of the most studied classes of algebraic varieties are: plane algebraic curves, which include lines, circles, parabolas, ellipses, hyperbolas, cubic curves like elliptic curves and quartic curves like lemniscates, and Cassini ovals. A point of the plane belongs to an algebraic curve if its coordinates satisfy a given polynomial equation. Basic questions involve the study of the points of special interest like the singular points, the inflection points and the points at infinity. More advanced questions involve the topology of the curve and relations between the curves given by different equations.

{{#invoke:main|main}} A differential equation is a mathematical equation that relates some function with its derivatives. In applications, the functions usually represent physical quantities, the derivatives represent their rates of change, and the equation defines a relationship between the two. Because such relations are extremely common, differential equations play a prominent role in many disciplines including engineering, physics, economics, and biology.

If a self-contained formula for the solution is not available, the solution may be numerically approximated using computers. The theory of dynamical systems puts emphasis on qualitative analysis of systems described by differential equations, while many numerical methods have been developed to determine solutions with a given degree of accuracy.

Linear differential equations, which have solutions that can be added and multiplied by coefficients, are well-defined and understood, and exact closed-form solutions are obtained. By contrast, ODEs that lack additive solutions are nonlinear, and solving them is far more intricate, as one can rarely represent them by elementary functions in closed form: Instead, exact and analytic solutions of ODEs are in series or integral form. Graphical and numerical methods, applied by hand or by computer, may approximate solutions of ODEs and perhaps yield useful information, often sufficing in the absence of exact, analytic solutions.

Equations can be classified according to the types of operations and quantities involved. Important types include: