Template:Network Science In graph theory, the Erdős–Rényi model is either of two closely related models for generating random graphs, including one that sets an edge between each pair of nodes with equal probability, independently of the other edges. They are named for Paul Erdős and Alfréd Rényi, who first introduced one of the two models in 1959;[1][2] the other model was introduced independently and contemporaneously by Edgar Gilbert.[3] These models can be used in the probabilistic method to prove the existence of graphs satisfying various properties, or to provide a rigorous definition of what it means for a property to hold for almost all graphs. A quite recent and interesting applications of these models is on the discovery of network motifs, in systems biology.[4]

There are two closely related variants of the Erdős–Rényi (ER) random graph model. 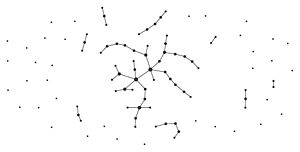 A graph generated by the binomial model of Erdős and Rényi (p = 0.01)

graphs on n vertices are chosen with equal probability.

The behavior of random graphs are often studied in the case where n, the number of vertices, tends to infinity. Although p and M can be fixed in this case, they can also be functions depending on n. For example, the statement

Almost every graph in G(n, 2ln(n)/n) is connected.

Comparison between the two models

The expected number of edges in G(n, p) is

, and by the law of large numbers any graph in G(n, p) will almost surely have approximately this many edges (provided the expected number of edges tends to infinity). Therefore a rough heuristic is that if pn2 → ∞, then G(n,p) should behave similarly to G(n, M) with

In practice, the G(n, p) model is the one more commonly used today, in part due to the ease of analysis allowed by the independence of the edges.

With the notation above, a graph in G(n, p) has on average

edges. The distribution of the degree of any particular vertex is binomial:[5]

where n is the total number of vertices in the graph. Since

this distribution is Poisson for large n and np = const.

In a 1960 paper, Erdős and Rényi[6] described the behavior of G(n, p) very precisely for various values of p. Their results included that:

is a sharp threshold for the connectedness of G(n, p).

Further properties of the graph can be described almost precisely as n tends to infinity. For example, there is a k(n) (approximately equal to 2log2(n)) such that the largest clique in G(n, 0.5) has almost surely either size k(n) or k(n) + 1.

In percolation theory one examines a finite or infinite graph and removes edges (or links) randomly. Thus the Erdős–Rényi process is in fact unweighted link percolation on the complete graph. (One refers to percolation in which nodes and/or links are removed with heterogeneous weights as weighted percolation). As percolation theory has much of its roots in physics, much of the research done was on the lattices in Euclidean spaces. The transition at np = 1 from giant component to small component has analogs for these graphs, but for lattices the transition point is difficult to determine. Physicists often refer to study of the complete graph as a mean field theory. Thus the Erdős–Rényi process is the mean-field case of percolation.

Some significant work was also done on percolation on random graphs. From a physicist's point of view this would still be a mean-field model, so the justification of the research is often formulated in terms of the robustness of the graph, viewed as a communication network. Given a random graph of n ≫ 1 nodes with an average degree <k>. Remove randomly a fraction 1 − p′ of nodes and leave only a fraction p′ from the network. There exists a critical percolation threshold

below which the network becomes fragmented while above

a giant connected component of order n exists. The relative size of the giant component, P∞, is given by[1][2][7][8]

Both of the two major assumptions of the G(n, p) model (that edges are independent and that each edge is equally likely) may be inappropriate for modeling certain real-life phenomena. In particular, an Erdős–Rényi graph does not have heavy tails, as is the case in many real networks. Moreover, it has low clustering, unlike many social networks. For popular modeling alternatives, see Barabási–Albert model and Watts and Strogatz model. One should note that these alternative models are not percolation processes, but instead represent a growth and rewiring model, respectively. A model for interacting ER networks was developed recently by Buldyrev et al..[9]