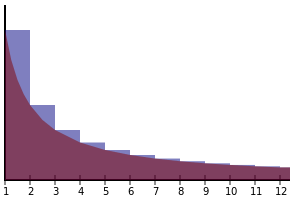 The area of the blue region converges to the Euler–Mascheroni constant.

It is defined as the limiting difference between the harmonic series and the natural logarithm:

The numerical value of the Euler–Mascheroni constant, to 50 decimal places, is

appears nowhere in the writings of either Euler or Mascheroni, and was chosen at a later time perhaps because of the constant's connection to the gamma function.[3] For example, the German mathematician Carl Anton Bretschneider used the notation

The Euler–Mascheroni constant appears, among other places, in the following ('*' means that this entry contains an explicit equation):

has not been proved algebraic or transcendental. In fact, it is not even known whether

is irrational. Continued fraction analysis reveals that if

a major open question in mathematics. Also see Sondow (2003a).

is related to the digamma function Ψ, and hence the derivative of the gamma function Γ, when both functions are evaluated at 1. Thus:

This is equal to the limits:

Relation to the zeta function

can also be expressed as an infinite sum whose terms involve the Riemann zeta function evaluated at positive integers:

Other series related to the zeta function include:

The error term in the last equation is a rapidly decreasing function of n. As a result, the formula is well-suited for efficient computation of the constant to high precision.

Other interesting limits equaling the Euler–Mascheroni constant are the antisymmetric limit (Sondow, 1998)

Closely related to this is the rational zeta series expression. By peeling off the first few terms of the series above, one obtains an estimate for the classical series limit:

equals the value of a number of definite integrals:

is the fractional Harmonic number.

Definite integrals in which

using a special case of Hadjicostas's formula as a double integral (Sondow 2003a, 2005) with equivalent series:

An interesting comparison by J. Sondow (2005) is the double integral and alternating series

may be thought of as an "alternating Euler constant".

We have also Catalan's 1875 integral (see Sondow and Zudilin)

is equivalent to series Nielsen found in 1897:

is the logarithm of base 2 and

is the floor function.

From the Malmsten-Kummer-expansion for the logarithm of the gamma function we get:

equals the following asymptotic formulas (where

is the nth harmonic number.)

The third formula is also called the Ramanujan expansion.

Relations with the reciprocal logarithm

are called Gregory coefficients; the first six were given in a letter to John Collins in 1670. From the equations

, which can be used recursively to get these coefficients for all

, we get the table

and the integral representation

Euler's constant has the integral representations

A very important expansion of Gregorio Fontana (1780) is:

which is convergent for all n.

Weighted sums of the Gregory coefficients give different constants:

The constant eγ is important in number theory. Some authors denote this quantity simply as

. eγ equals the following limit, where pn is the nth prime number:

This restates the third of Mertens' theorems. The numerical value of eγ is:

Other infinite products relating to eγ include:

These products result from the Barnes G-function.

where the nth factor is the (n+1)st root of

The continued fraction expansion of

A002852, of which there is no apparent pattern. The continued fraction has at least 470,000 terms,[7] and it has infinitely many terms if and only if

Euler's generalized constants are given by

as the special case α = 1.[10] This can be further generalized to

for some arbitrary decreasing function f. For example,

gives rise to the Stieltjes constants, and

where again the limit

A two-dimensional limit generalization is the Masser–Gramain constant.

Euler-Lehmer constants are given by summation of inverses of numbers in a common modulo class[11] ,[12]

The basic properties are