The probability density function (pdf) of an exponential distribution is

Alternatively, this can be defined using the Heaviside step function, H(x).

The cumulative distribution function is given by

Alternatively, this can be defined using the Heaviside step function, H(x).

where β > 0 is mean, standard deviation, and scale parameter of the distribution, the reciprocal of the rate parameter, λ, defined above. In this specification, β is a survival parameter in the sense that if a random variable X is the duration of time that a given biological or mechanical system manages to survive and X ~ Exp(β) then E[X] = β. That is to say, the expected duration of survival of the system is β units of time. The parametrization involving the "rate" parameter arises in the context of events arriving at a rate λ, when the time between events (which might be modeled using an exponential distribution) has a mean of β = λ−1.

The alternative specification is sometimes more convenient than the one given above, and some authors will use it as a standard definition. This alternative specification is not used here. Unfortunately this gives rise to a notational ambiguity. In general, the reader must check which of these two specifications is being used if an author writes "X ~ Exp(λ)", since either the notation in the previous (using λ) or the notation in this section (here, using β to avoid confusion) could be intended. An example of this notational switch[1] uses λ for β.

Replacing β for λ, one derives the standard truncated mean (for x resampled if x>1) as

and inverting, one obtains (since

) an approximate estimator for

. The MLE for the untruncated

(see Parameter estimation) and suffices for estimating the censored mean (for

Simulating an exponential random variable is

The mean is the probability mass centre, that is the first moment. 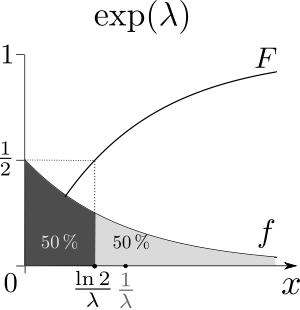 In light of the examples given above, this makes sense: if you receive phone calls at an average rate of 2 per hour, then you can expect to wait half an hour for every call.

The variance of X is given by

so the standard deviation is equal to the mean.

The median of X is given by

where ln refers to the natural logarithm. Thus the absolute difference between the mean and median is

in accordance with the median-mean inequality.

When T is interpreted as the waiting time for an event to occur relative to some initial time, this relation implies that, if T is conditioned on a failure to observe the event over some initial period of time s, the distribution of the remaining waiting time is the same as the original unconditional distribution. For example, if an event has not occurred after 30 seconds, the conditional probability that occurrence will take at least 10 more seconds is equal to the unconditional probability of observing the event more than 10 seconds relative to the initial time.

The exponential distribution is consequently also necessarily the only continuous probability distribution that has a constant Failure rate.

The quantile function (inverse cumulative distribution function) for Exp(λ) is

The quartiles are therefore:

And as a consequence the interquartile range is ln(3)/λ.

The directed Kullback–Leibler divergence of

('true' distribution) is given by

Among all continuous probability distributions with support

, the exponential distribution with

has the largest differential entropy. In other words, it is the maximum entropy probability distribution for a random variate

is fixed and greater than zero.[3]

Distribution of the minimum of exponential random variables

is also exponentially distributed, with parameter

This can be seen by considering the complementary cumulative distribution function:

is not exponentially distributed.

Suppose a given variable is exponentially distributed and the rate parameter λ is to be estimated. Among the estimators of λ, the maximum likelihood estimator (MLE) and the uniformly minimum variance unbiased estimator (UMVUE) are 1/Xbar and (n-1)/(Xbar*n), respectively. The one that minimizes the expected mean squared error is (n-2)/(Xbar*n).[4]

The likelihood function for λ, given an independent and identically distributed sample x = (x1, ..., xn) drawn from the variable, is:

is the sample mean.

The derivative of the likelihood function's logarithm is:

Consequently the maximum likelihood estimate for the rate parameter is:

Although this is not an unbiased estimator of

is an unbiased[5] MLE[6] estimator of

is the scale parameter defined in the 'Alternative parameterization' section above and the distribution mean.

The 100(1 − α)% confidence interval for the rate parameter of an exponential distribution is given by:[7]

which is also equal to:

This approximation may be acceptable for samples containing at least 15 to 20 elements.[8]

The posterior distribution p can then be expressed in terms of the likelihood function defined above and a gamma prior:

Now the posterior density p has been specified up to a missing normalizing constant. Since it has the form of a gamma pdf, this can easily be filled in, and one obtains:

A conceptually very simple method for generating exponential variates is based on inverse transform sampling: Given a random variate U drawn from the uniform distribution on the unit interval (0, 1), the variate

has an exponential distribution, where F −1 is the quantile function, defined by

Moreover, if U is uniform on (0, 1), then so is 1 − U. This means one can generate exponential variates as follows:

Other methods for generating exponential variates are discussed by Knuth[9] and Devroye.[10]

The ziggurat algorithm is a fast method for generating exponential variates.

A fast method for generating a set of ready-ordered exponential variates without using a sorting routine is also available.[10]

The exponential distribution occurs naturally when describing the lengths of the inter-arrival times in a homogeneous Poisson process.

In real-world scenarios, the assumption of a constant rate (or probability per unit time) is rarely satisfied. For example, the rate of incoming phone calls differs according to the time of day. But if we focus on a time interval during which the rate is roughly constant, such as from 2 to 4 p.m. during work days, the exponential distribution can be used as a good approximate model for the time until the next phone call arrives. Similar caveats apply to the following examples which yield approximately exponentially distributed variables: 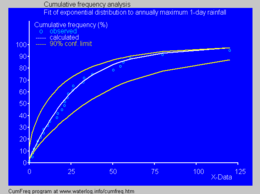 Reliability theory and reliability engineering also make extensive use of the exponential distribution. Because of the memoryless property of this distribution, it is well-suited to model the constant hazard rate portion of the bathtub curve used in reliability theory. It is also very convenient because it is so easy to add failure rates in a reliability model. The exponential distribution is however not appropriate to model the overall lifetime of organisms or technical devices, because the "failure rates" here are not constant: more failures occur for very young and for very old systems.

In physics, if you observe a gas at a fixed temperature and pressure in a uniform gravitational field, the heights of the various molecules also follow an approximate exponential distribution, known as the Barometric formula. This is a consequence of the entropy property mentioned below.

In hydrology, the exponential distribution is used to analyze extreme values of such variables as monthly and annual maximum values of daily rainfall and river discharge volumes.[12]

The blue picture illustrates an example of fitting the exponential distribution to ranked annually maximum one-day rainfalls showing also the 90% confidence belt based on the binomial distribution. The rainfall data are represented by plotting positions as part of the cumulative frequency analysis.

Having observed a sample of n data points from an unknown exponential distribution a common task is to use these samples to make predictions about future data from the same source. A common predictive distribution over future samples is the so-called plug-in distribution, formed by plugging a suitable estimate for the rate parameter λ into the exponential density function. A common choice of estimate is the one provided by the principle of maximum likelihood, and using this yields the predictive density over a future sample xn+1, conditioned on the observed samples x = (x1, ..., xn) given by

The Bayesian approach provides a predictive distribution which takes into account the uncertainty of the estimated parameter, although this may depend crucially on the choice of prior.

which can be considered as

where the expectation is taken with respect to the exponential distribution with rate parameter λ0 ∈ (0, ∞), and ψ( · ) is the digamma function. It is clear that the CNML predictive distribution is strictly superior to the maximum likelihood plug-in distribution in terms of average Kullback–Leibler divergence for all sample sizes n > 0.