Interference fringes, showing fine structure, from a Fabry–Pérot etalon. The source is a cooled deuterium lamp.

In optics, a Fabry–Pérot interferometer or etalon is typically made of a transparent plate with two reflecting surfaces, or two parallel highly reflecting mirrors. (Technically the former is an etalon and the latter is an interferometer, but the terminology is often used inconsistently.) Its transmission spectrum as a function of wavelength exhibits peaks of large transmission corresponding to resonances of the etalon. It is named after Charles Fabry and Alfred Perot.[1] "Etalon" is from the French étalon, meaning "measuring gauge" or "standard".[2]

Etalons are widely used in telecommunications, lasers and spectroscopy to control and measure the wavelengths of light. Recent advances in fabrication technique allow the creation of very precise tunable Fabry–Pérot interferometers.

Fabry–Pérot interferometer, using a pair of partially reflective, slightly wedged optical flats. The wedge angle is highly exaggerated in this illustration; only a fraction of a degree is actually necessary to avoid ghost fringes. Low-finesse versus high-finesse images correspond to mirror reflectivities of 4% (bare glass) and 95%.

The heart of the Fabry–Pérot interferometer is a pair of partially reflective glass optical flats spaced micrometers to centimeters apart, with the reflective surfaces facing each other. (Alternatively, a Fabry–Pérot etalon uses a single plate with two parallel reflecting surfaces.) The flats in an interferometer are often made in a wedge shape to prevent the rear surfaces from producing interference fringes; the rear surfaces often also have an anti-reflective coating.

In a typical system, illumination is provided by a diffuse source set at the focal plane of a collimating lens. A focusing lens after the pair of flats would produce an inverted image of the source if the flats were not present; all light emitted from a point on the source is focused to a single point in the system's image plane. In the accompanying illustration, only one ray emitted from point A on the source is traced. As the ray passes through the paired flats, it is multiply reflected to produce multiple transmitted rays which are collected by the focusing lens and brought to point A' on the screen. The complete interference pattern takes the appearance of a set of concentric rings. The sharpness of the rings depends on the reflectivity of the flats. If the reflectivity is high, resulting in a high Q factor, monochromatic light produces a set of narrow bright rings against a dark background. A Fabry–Pérot interferometer with high Q is said to have high finesse.

File:LASCO C1a.png
A picture of the solar corona taken with the LASCO C1 coronagraph which employed a tunable Fabry–Pérot interferometer to recover scans of the solar corona at a number of wavelengths near the FeXIV green line at 5308 Å. The picture is a color-coded image of the doppler shift of the line, which may be associated with the coronal plasma velocity towards or away from the satellite camera. In calculating the velocity, the velocity due to solar rotation has been subtracted. 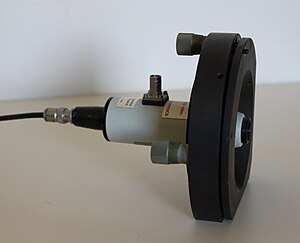 The varying transmission function of an etalon is caused by interference between the multiple reflections of light between the two reflecting surfaces. Constructive interference occurs if the transmitted beams are in phase, and this corresponds to a high-transmission peak of the etalon. If the transmitted beams are out-of-phase, destructive interference occurs and this corresponds to a transmission minimum. Whether the multiply reflected beams are in phase or not depends on the wavelength (λ) of the light (in vacuum), the angle the light travels through the etalon (θ), the thickness of the etalon (ℓ) and the refractive index of the material between the reflecting surfaces (n).

The phase difference between each successive transmitted pair (i.e. T2 - T1 in the diagram) is given by δ:[3]

If both surfaces have a reflectance R, the transmittance function of the etalon is given by

is the coefficient of finesse. 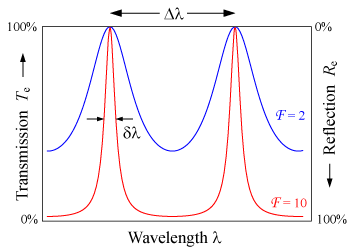 ) between each transmitted beam is an integer multiple of the wavelength. In the absence of absorption, the reflectance of the etalon Re is the complement of the transmittance, such that

. The maximum reflectivity is given by:

and this occurs when the path-length difference is equal to half an odd multiple of the wavelength.

The wavelength separation between adjacent transmission peaks is called the free spectral range (FSR) of the etalon, Δλ, and is given by:

where λ0 is the central wavelength of the nearest transmission peak. The FSR is related to the full-width half-maximum, δλ, of any one transmission band by a quantity known as the finesse:

If the two mirrors are not equal, the finesse becomes

Etalons with high finesse show sharper transmission peaks with lower minimum transmission coefficients. In the oblique incidence case, the finesse will depend on the polarization state of the beam, since the value of "R", given by the Fresnel equations, is generally different for p and s polarizations.

A Fabry–Pérot interferometer differs from a Fabry–Pérot etalon in the fact that the distance ℓ between the plates can be tuned in order to change the wavelengths at which transmission peaks occur in the interferometer. Due to the angle dependence of the transmission, the peaks can also be shifted by rotating the etalon with respect to the beam.

Fabry–Pérot interferometers or etalons are used in optical modems, spectroscopy, lasers, and astronomy.

A related device is the Gires–Tournois etalon. 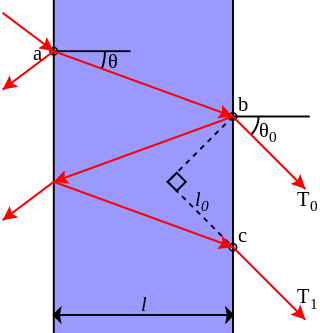 Two beams are shown in the diagram at the right, one of which (T0) is transmitted through the etalon, and the other of which (T1) is reflected twice before being transmitted. At each reflection, the amplitude is reduced by

, while at each transmission through an interface the amplitude is reduced by

. Assuming no absorption, conservation of energy requires T + R = 1. In the derivation below, n is the index of refraction inside the etalon, and n0 is that outside the etalon. It is presumed that n > n0. The incident amplitude at point a is taken to be one, and phasors are used to represent the amplitude of the radiation. The transmitted amplitude at point b will then be

is the wavenumber inside the etalon and λ is the vacuum wavelength. At point c the transmitted amplitude will be

The total amplitude of both beams will be the sum of the amplitudes of the two beams measured along a line perpendicular to the direction of the beam. The amplitude t0 at point b can therefore be added to t'1 retarded in phase by an amount

is the wavenumber outside of the etalon. Thus

The phase difference between the two beams is

The relationship between θ and θ0 is given by Snell's law:

so that the phase difference may be written:

To within a constant multiplicative phase factor, the amplitude of the mth transmitted beam can be written as:

The total transmitted amplitude is the sum of all individual beams' amplitudes:

The series is a geometric series whose sum can be expressed analytically. The amplitude can be rewritten as

The intensity of the beam will be just t times its complex conjugate. Since the incident beam was assumed to have an intensity of one, this will also give the transmission function:

Another expression for the transmission function

the above expression may be written as:

The second term is proportional to a wrapped Lorentzian distribution so that the transmission function may be written as a series of Lorentzian functions: