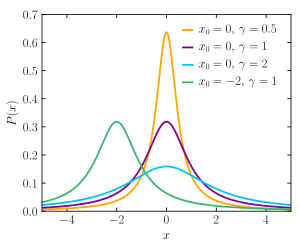 That is, if X has probability density function

" refers to the asymptotic equivalence of functions. Some reserve the term "fat tail" for distributions where 0 < α < 2 (i.e. only in cases with infinite variance).

Levy flight from a Cauchy Distribution compared to Brownian Motion (below). Central events are more common and rare events more extreme in the Cauchy distribution than in Brownian motion. A single event may comprise 99% of total variation, hence the "undefined variance".

The Black–Scholes model of option pricing is based on a normal distribution. If the distribution is actually a fat-tailed one, then the model will under-price options that are far out of the money, since a 5- or 7-sigma event is much more likely than the normal distribution would predict.[5]

In finance, fat tails are considered undesirable because of the additional risk they imply. For example, an investment strategy may have an expected return, after one year, that is five times its standard deviation. Assuming a normal distribution, the likelihood of its failure (negative return) is less than one in a million; in practice, it may be higher. Normal distributions that emerge in finance generally do so because the factors influencing an asset's value or price are mathematically "well-behaved", and the central limit theorem provides for such a distribution. However, traumatic "real-world" events (such as an oil shock, a large corporate bankruptcy, or an abrupt change in a political situation) are usually not mathematically well-behaved.

Historical examples include the Black Monday (1987), Dot-com bubble, Late-2000s financial crisis, and the unpegging of some currencies.[6]

The "fat tails" are also observed in commodity markets or in the record industry, especially in phonographic market. The probability density function for logarithm of weekly record sales changes is highly leptokurtic and characterized by a narrower and larger maximum, and by a fatter tail than in the Gaussian case. On the other hand, this distribution has only one fat tail associated with an increase in sales due to promotion of the new records that enter the charts.[7]

In The Fat Tail: The Power of Political Knowledge for Strategic Investing, political scientists Ian Bremmer and Preston Keat propose to apply the fat tail concept to geopolitics. As William Safire notes in his etymology of the term,[8] a fat tail occurs when there is an unexpectedly thick end or “tail” toward the edges of a distribution curve, indicating an irregularly high likelihood of catastrophic events. This represents the risks of a particular event occurring that are so unlikely to happen and difficult to predict that many choose to ignore their possibility. One example that Bremmer and Keat highlight in The Fat Tail is the August 1998 Russian devaluation and debt default. Leading up to this event, economic analysts predicted that Russia would not default because the country had both the ability and willingness to continue to make its payments. However, political analysts argued that Russia’s fragmented leadership and lack of market regulation—along with the fact that several powerful Russian officials would benefit from a default—reduced Russia’s willingness to pay. Since these political factors were missing from the economic models, the economists did not assign the correct probability to a Russian default.