Finite Model Theory (FMT) is a subarea of model theory (MT). MT is the branch of mathematical logic which deals with the relation between a formal language (syntax) and its interpretations (semantics). FMT is a restriction of MT to interpretations of finite structures, which have a finite universe.

A single structure can always be uniquely described in first-order logic. Some finite sets of structures can also be described in FO. However, FO is not sufficient to describe any set containing infinite structures.

Characterisation of a Single Structure

Is a language L expressive enough to describe a single finite structure S uniquely (up to isomorphism)?

Single graphs (1) and (1') having common properties.

However, these properties do not describe the structure uniquely (up to isomorphism), since for structure (1') the above properties hold as well, yet structures (1) and (1') are not isomorphic.

Informally the question is whether by adding enough properties, these properties together describe exactly (1) and are valid (all together) for no other structure (up to isomorphism).

For a single finite structure it is always possible to precisely describe the structure by a single FO sentence. The principle is illustrated here for a structure with one binary relation

all for the same tuple

Extension to a fixed Number of Structures

The method of describing a single structure by means of a first-order sentence can easily be extended for any fixed number of structures. A unique description can be obtained by the disjunction of the descriptions for each structure. For instance, for 2 structures this would be

Extension to an infinite Structure

By definition, a set containing an infinite structure falls outside the area that FMT deals with. Note that infinite structures can never be discriminated in FO because of the compactness theorem of classical MT: for every infinite model a non-isomorphic one can be found, but which has exactly the same FO properties.

The most famous example is probably Skolem's theorem, that there is a countable non-standard model of arithmetic.

Characterisation of a Class of Structures

Is a language L expressive enough to describe exactly those finite structures that have certain property P in common (up to isomorphism)? 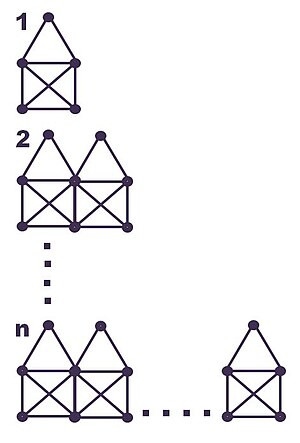 Set of up to n structures.

The descriptions given so far all specify the number of elements of the universe. Unfortunately most interesting sets of structures are not restricted to a certain size, like all graphs that are trees, are connected or are acyclic. Thus to discriminate a finite number of structures is of special importance.

Instead of a general statement, the following is a sketch of a methodology to differentiate between structures that can and cannot be discriminated.

1. The core idea is that whenever one wants to see if a Property P can be expressed in FO, one chooses structures A and B, where A does have P and B doesn't. If for A and B the same FO sentences hold, then P cannot be expressed in FO (else it can). In short:

for all FO-sentences α, and P represents the class of structures with property P.

2. The methodology considers countably many subsets of the language, the union of which forms the language itself. For instance, for FO consider classes FO[m] for each m. For each m the above core idea then has to be shown. That is:

and α (in ≡) from FO[m]. It may be appropriate to choose the classes FO[m] to form a partition of the language.

3. One common way to define FO[m] is by means of the quantifier rank qr(α) of a FO formula α, which expresses the depth of quantifier nesting. For example for a formula in prenex normal form, qr is simply the total number of its quantifiers. Then FO[m] can be defined as all FO formulas α with qr(α) ≤ m (or, if a partition is desired, as those FO formulas with quantifier rank equal to m).

4. Thus it all comes down to showing

on the subsets FO[m]. The main approach here is to use the algebraic characterization provided by Ehrenfeucht–Fraïssé games. Informally, these take a single partial isomorphism on A and B and extend it m times, in order to either prove or disprove

, dependent on who wins the game.

We want to show that the property that the size of an orderered structure A=(A, ≤) is even, can not be expressed in FO.

1. The idea is to pick A ∈ EVEN and B ∉ EVEN, where EVEN is the class of all structures of even size.

5. Thus EVEN on finite ordered structures cannot be expressed in FO.

(*) Note that the proof of the result of the Ehrenfeucht–Fraïssé game has been omitted, since it is not the main focus here.

A substantial fragment of SQL (namely that which is effectively relational algebra) is based on first-order logic (more precisely can be translated in domain relational calculus by means of Codd's theorem), as the following example illustrates: Think of a database table "GIRLS" with the columns "FIRST_NAME" and "LAST_NAME". This corresponds to a binary relation, say G(f, l) on FIRST_NAME X LAST_NAME. The FO query {l : G('Judy', l)}, which returns all the last names where the first name is 'Judy', would look in SQL like this:

Notice, we assume here, that all last names appear only once (or we should use SELECT DISTINCT since we assume that relations and answers are sets, not bags).

Next we want to make a more complex statement. Therefore in addition to the "GIRLS" table we have a table "BOYS" also with the columns "FIRST_NAME" and "LAST_NAME". Now we want to query the last names of all the girls that have the same last name as at least one of the boys. The FO query is {(f,l) : ∃h ( G(f, l) ∧ B(h, l) )}, and the corresponding SQL statement is:

Notice that in order to express the "∧" we introduced the new language element "IN" with a subsequent select statement. This makes the language more expressive for the price of higher difficulty to learn and implement. This is a common trade-off in formal language design. The way shown above ("IN") is by far not the only one to extend the language. An alternative way is e.g. to introduce a "JOIN" operator, that is:

First-order logic is too restrictive for some database applications, for instance because of its inability to express transitive closure. This has led to more powerful constructs being added to database query languages, such as recursive WITH in SQL:1999. More expressive logics, like fixpoint logics, have therefore been studied in finite model theory because of their relevance to database theory and applications.

Narrative data contains no defined relations. Thus the logical structure of text search queries can be expressed in Propositional Logic, like in:

Note that the challenges in full text search are different from database querying, like ranking of results.

|CitationClass=conference }} Also suitable as a general introduction and overview.