A fluid coupling or hydraulic coupling is a hydrodynamic device used to transmit rotating mechanical power.[1] It has been used in automobile transmissions as an alternative to a mechanical clutch. It also has widespread application in marine and industrial machine drives, where variable speed operation and controlled start-up without shock loading of the power transmission system is essential.

The fluid coupling originates from the work of Dr. Hermann Föttinger, who was the chief designer at the AG Vulcan Works in Stettin.[2] His patents from 1905 covered both fluid couplings and torque converters.

Dr Bauer of the Vulcan-Werke collaborated with English engineer Harold Sinclair of Hydraulic Coupling Patents Limited to adapt the Föttinger coupling to vehicle transmission in an attempt to mitigate the lurching Sinclair had experienced while riding on London buses during the 1920s[2] Following Sinclair's discussions with the London General Omnibus Company begun in October 1926 and trials on an Associated Daimler bus chassis Percy Martin of Daimler decided to apply the principle to the Daimler group's private cars.[3]

During 1930 The Daimler Company of Coventry, England began to introduce a transmission system using a fluid coupling and Wilson self-changing gearbox for buses and their flagship cars. By 1933 the system was used in all new Daimler Lanchester and BSA vehicles produced by the group from heavy commercial vehicles to small cars. It was soon extended to Daimler's military vehicles. These couplings are described as constructed under Vulcan-Sinclair and Daimler patents.[3] 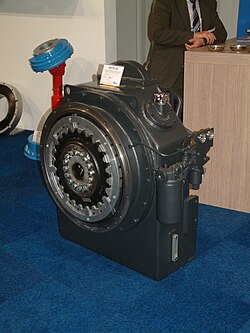 A fluid coupling consists of three components, plus the hydraulic fluid:

The driving turbine, known as the 'pump', (or driving torusTemplate:Efn) is rotated by the prime mover, which is typically an internal combustion engine or electric motor. The impellor's motion imparts both outwards linear and rotational motion to the fluid.

The motion of the fluid is effectively toroidal - travelling in one direction on paths that can be visualised as being on the surface of a torus:

An important characteristic of a fluid coupling is its stall speed. The stall speed is defined as the highest speed at which the pump can turn when the output turbine is locked and maximum input power is applied. Under stall conditions all of the engine's power would be dissipated in the fluid coupling as heat, possibly leading to damage.

A modification to the simple fluid coupling is the step-circuit coupling which was formerly manufactured as the "STC coupling" by the Fluidrive Engineering Company.

The STC coupling contains a reservoir to which some, but not all, of the oil gravitates when the output shaft is stalled. This reduces the "drag" on the input shaft, resulting in reduced fuel consumption when idling and a reduction in the vehicle's tendency to "creep".

When the output shaft begins to rotate, the oil is thrown out of the reservoir by centrifugal force, and returns to the main body of the coupling, so that normal power transmission is restored.[6]

A fluid coupling cannot develop output torque when the input and output angular velocities are identical.[7] Hence a fluid coupling cannot achieve 100 percent power transmission efficiency. Due to slippage that will occur in any fluid coupling under load, some power will always be lost in fluid friction and turbulence, and dissipated as heat. Like other fluid dynamical devices, its efficiency tends to increase gradually with increasing scale, as measured by the Reynolds number.

As a fluid coupling operates kinetically, low viscosity fluids are preferred.[7] Generally speaking, multi-grade motor oils or automatic transmission fluids are used. Increasing density of the fluid increases the amount of torque that can be transmitted at a given input speed.[8]

Fluid couplings can also act as hydrodynamic brakes, dissipating rotational energy as heat through frictional forces (both viscous and fluid/container). When a fluid coupling is used for braking it is also known as a retarder.[5]

In automotive applications, the pump typically is connected to the flywheel of the engine—in fact, the coupling's enclosure may be part of the flywheel proper, and thus is turned by the engine's crankshaft. The turbine is connected to the input shaft of the transmission. While the transmission is in gear, as engine speed increases torque is transferred from the engine to the input shaft by the motion of the fluid, propelling the vehicle. In this regard, the behavior of the fluid coupling strongly resembles that of a mechanical clutch driving a manual transmission.

Fluid flywheels, as distinct from torque converters, are best known for their use in Daimler cars in conjunction with a Wilson pre-selector gearbox. Daimler used these throughout their range of luxury cars, until switching to automatic gearboxes with the 1958 Majestic. Daimler and Alvis were both also known for their military vehicles and armored cars, some of which also used the combination of pre-selector gearbox and fluid flywheel.

The most prominent use of fluid couplings in aeronautical applications was in the Wright turbo-compound reciprocating engine, in which three power recovery turbines extracted approximately 20 percent of the energy or about Template:Convert from the engine's exhaust gases and then, using three fluid couplings and gearing, converted low-torque high-speed turbine rotation to low-speed, high-torque output to drive the propeller.

Generally speaking, the power transmitting capability of a given fluid coupling is strongly related to pump speed, a characteristic that generally works well with applications where the applied load doesn't fluctuate to a great degree. The torque transmitting capacity of any hydrodynamic coupling can be described by the expression

is the mass density of the fluid,

is the impeller speed, and

is the impeller diameter.[11] In the case of automotive applications, where loading can vary to considerable extremes,

is only an approximation. Stop-and-go driving will tend to operate the coupling in its least efficient range, causing an adverse effect on fuel economy.

Fluid couplings are relatively simple components to produce. For example, the turbines can be aluminum castings or steel stampings, and the housing can also be a casting or made from stamped or forged steel.

This is not an exhaustive list but is intended to give an idea of the development of fluid couplings in the 20th century.