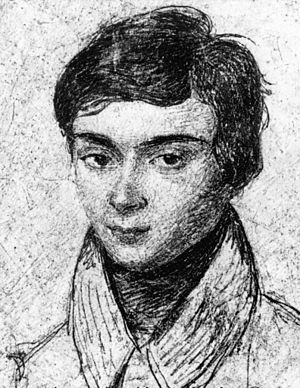 Originally, Galois used permutation groups to describe how the various roots of a given polynomial equation are related to each other. The modern approach to Galois theory, developed by Richard Dedekind, Leopold Kronecker and Emil Artin, among others, involves studying automorphisms of field extensions.

Further abstraction of Galois theory is achieved by the theory of Galois connections.

The birth of Galois theory was originally motivated by the following question, whose answer is known as the Abel–Ruffini theorem.

Why is there no formula for the roots of a fifth (or higher) degree polynomial equation in terms of the coefficients of the polynomial, using only the usual algebraic operations (addition, subtraction, multiplication, division) and application of radicals (square roots, cube roots, etc)?

Galois theory not only provides a beautiful answer to this question, it also explains in detail why it is possible to solve equations of degree four or lower in the above manner, and why their solutions take the form that they do. Further, it gives a conceptually clear, and often practical, means of telling when some particular equation of higher degree can be solved in that manner.

Galois theory also gives a clear insight into questions concerning problems in compass and straightedge construction. It gives an elegant characterisation of the ratios of lengths that can be constructed with this method. Using this, it becomes relatively easy to answer such classical problems of geometry as

Which regular polygons are constructible polygons?[1]
Why is it not possible to trisect every angle using a compass and straightedge?[1]

{{#invoke:see also|seealso}} Galois theory originated in the study of symmetric functions – the coefficients of a monic polynomial are (up to sign) the elementary symmetric polynomials in the roots. For instance, (x – a)(x – b) = x2 – (a + b)x + ab, where 1, a + b and ab are the elementary polynomials of degree 0, 1 and 2 in two variables.

...[Girard was] the first person who understood the general doctrine of the formation of the coefficients of the powers from the sum of the roots and their products. He was the first who discovered the rules for summing the powers of the roots of any equation.

The cubic was first partly solved by the 15th/16th century Italian mathematician Scipione del Ferro, who did not however publish his results; this method only solved one of three classes, as the others involved taking square roots of negative numbers, and complex numbers were not known at the time. This solution was then rediscovered independently in 1535 by Niccolò Fontana Tartaglia, who shared it with Gerolamo Cardano, asking him to not publish it. Cardano then extended this to the other two cases, using square roots of negatives as intermediate steps; see details at Cardano's method. After the discovery of Ferro's work, he felt that Tartaglia's method was no longer secret, and thus he published his complete solution in his 1545 Ars Magna.[3] His student Lodovico Ferrari solved the quartic polynomial; his solution was also included in Ars Magna.

A further step was the 1770 paper Réflexions sur la résolution algébrique des équations by the French-Italian mathematician Joseph Louis Lagrange, in his method of Lagrange resolvents, where he analyzed Cardano and Ferrarri's solution of cubics and quartics by considering them in terms of permutations of the roots, which yielded an auxiliary polynomial of lower degree, providing a unified understanding of the solutions and laying the groundwork for group theory and Galois theory. Crucially, however, he did not consider composition of permutations. Lagrange's method did not extend to quintic equations or higher, because the resolvent had higher degree.

The quintic was almost proven to have no general solutions by radicals by Paolo Ruffini in 1799, whose key insight was to use permutation groups, not just a single permutation. His solution contained a gap, which Cauchy considered minor, though this was not patched until the work of Norwegian mathematician Niels Henrik Abel, who published a proof in 1824, thus establishing the Abel–Ruffini theorem.

While Ruffini and Abel established that the general quintic could not be solved, some particular quintics can be solved, such as (x − 1)5=0, and the precise criterion by which a given quintic or higher polynomial could be determined to be solvable or not was given by Évariste Galois, who showed that whether a polynomial was solvable or not was equivalent to whether or not the permutation group of its roots – in modern terms, its Galois group – had a certain structure – in modern terms, whether or not it was a solvable group. This group was always solvable for polynomials of degree four or less, but not always so for polynomials of degree five and greater, which explains why there is no general solution in higher degree.

Given a polynomial, it may be that some of the roots are connected by various algebraic equations. For example, it may be that for two of the roots, say A and B, that A2 + 5B3 = 7. The central idea of Galois theory is to consider those permutations (or rearrangements) of the roots having the property that any algebraic equation satisfied by the roots is still satisfied after the roots have been permuted. An important provison is that we restrict ourselves to algebraic equations whose coefficients are rational numbers. (One might instead specify a certain field in which the coefficients should lie but, for the simple examples below, we will restrict ourselves to the field of rational numbers.)

These permutations together form a permutation group, also called the Galois group of the polynomial (over the rational numbers). To illustrate this point, consider the following examples:

By using the quadratic formula, we find that the two roots are

Examples of algebraic equations satisfied by A and B include

Obviously, in either of these equations, if we exchange A and B, we obtain another true statement. For example, the equation A + B = 4 becomes simply B + A = 4. Furthermore, it is true, but far less obvious, that this holds for every possible algebraic equation with rational coefficients relating the A and B values above (in any such equation, swapping A and B yields another true equation). To prove this requires the theory of symmetric polynomials.

, which does not remain true when A and B are exchanged. However, this equation does not concern us, because it has the coefficient

which is not rational).

A similar discussion applies to any quadratic polynomial ax2 + bx + c, where a, b and c are rational numbers.

which can also be written as

We wish to describe the Galois group of this polynomial, again over the field of rational numbers. The polynomial has four roots:

Among these equations, we have:

It follows that, if

is a permutation that belongs to the Galois group, we must have:

This implies that the permutation is well defined by the image of A, that the Galois group has 4 elements, which are

and the Galois group is isomorphic to the Klein four-group.

In the modern approach, one starts with a field extension L/K (read: L over K), and examines the group of field automorphisms of L/K (these are bijective ring homomorphisms α: L → L such that α(x) = x for all x in K). See the article on Galois groups for further explanation and examples.

The connection between the two approaches is as follows. The coefficients of the polynomial in question should be chosen from the base field K. The top field L should be the field obtained by adjoining the roots of the polynomial in question to the base field. Any permutation of the roots which respects algebraic equations as described above gives rise to an automorphism of L/K, and vice versa.

There are several advantages to the modern approach over the permutation group approach.

Solvable groups and solution by radicals

The notion of a solvable group in group theory allows one to determine whether a polynomial is solvable in radicals, depending on whether its Galois group has the property of solvability. In essence, each field extension L/K corresponds to a factor group in a composition series of the Galois group. If a factor group in the composition series is cyclic of order n, and if in the corresponding field extension L/K the field K already contains a primitive n-th root of unity, then it is a radical extension and the elements of L can then be expressed using the nth root of some element of K.

If all the factor groups in its composition series are cyclic, the Galois group is called solvable, and all of the elements of the corresponding field can be found by repeatedly taking roots, products, and sums of elements from the base field (usually Q).

One of the great triumphs of Galois Theory was the proof that for every n > 4, there exist polynomials of degree n which are not solvable by radicals—the Abel–Ruffini theorem. This is due to the fact that for n > 4 the symmetric group Sn contains a simple, non-cyclic, normal subgroup, namely the alternating group An.

=1.1673... is algebraic, but not expressible in terms of radicals. The other four roots are complex numbers.

. By the rational root theorem this has no rational zeros. Neither does it have linear factors modulo 2 or 3.

The Galois group of

modulo 2 is cyclic of order 6, because

and a cubic polynomial.

has no linear or quadratic factor modulo 3, and hence is irreducible modulo 3. Thus its Galois group modulo 3 contains an element of order 5.

It is known[5] that a Galois group modulo a prime is isomorphic to a subgroup of the Galois group over the rationals. A permutation group on 5 objects with elements of orders 6 and 5 must be the symmetric group

, which is therefore the Galois group of

. This is one of the simplest examples of a non-solvable quintic polynomial. According to Serge Lang, Emil Artin found this example.[6]

For that, choose a field K and a finite group G. Cayley's theorem says that G is (up to isomorphism) a subgroup of the symmetric group S on the elements of G. Choose indeterminates {xα}, one for each element α of G, and adjoin them to K to get the field F = K({xα}). Contained within F is the field L of symmetric rational functions in the {xα}. The Galois group of F/L is S, by a basic result of Emil Artin. G acts on F by restriction of action of S. If the fixed field of this action is M, then, by the fundamental theorem of Galois theory, the Galois group of F/M is G.

It is an open problem to prove the existence of a field extension of the rational field Q with a given finite group as Galois group. Hilbert played a part in solving the problem for all symmetric and alternating groups. Igor Shafarevich proved that every solvable finite group is the Galois group of some extension of Q. Various people have solved the inverse Galois problem for selected non-abelian simple groups. Existence of solutions has been shown for all but possibly one (Mathieu group M23) of the 26 sporadic simple groups. There is even a polynomial with integral coefficients whose Galois group is the Monster group.

|CitationClass=book }} (Reprinting of second revised edition of 1944, The University of Notre Dame Press).

|CitationClass=book }} (Chapter 4 gives an introduction to the field-theoretic approach to Galois theory.)

|CitationClass=book }} (This book introduces the reader to the Galois theory of Grothendieck, and some generalisations, leading to Galois groupoids.)

Some on-line tutorials on Galois theory appear at:

Online textbooks in French, German, Italian and English can be found at: