To be more precise, it is necessary to specify what kind of objects may appear in the entries of the matrix. For example, the general linear group over R (the set of real numbers) is the group of n×n invertible matrices of real numbers, and is denoted by GLn(R) or GL(n, R).

More generally, the general linear group of degree n over any field F (such as the complex numbers), or a ring R (such as the ring of integers), is the set of n×n invertible matrices with entries from F (or R), again with matrix multiplication as the group operation.[1] Typical notation is GLn(F) or GL(n, F), or simply GL(n) if the field is understood.

More generally still, the general linear group of a vector space GL(V) is the abstract automorphism group, not necessarily written as matrices.

The special linear group, written SL(n, F) or SLn(F), is the subgroup of GL(n, F) consisting of matrices with a determinant of 1.

If V is a vector space over the field F, the general linear group of V, written GL(V) or Aut(V), is the group of all automorphisms of V, i.e. the set of all bijective linear transformations V → V, together with functional composition as group operation. If V has finite dimension n, then GL(V) and GL(n, F) are isomorphic. The isomorphism is not canonical; it depends on a choice of basis in V. Given a basis (e1, ..., en) of V and an automorphism T in GL(V), we have

for some constants ajk in F; the matrix corresponding to T is then just the matrix with entries given by the ajk.

In a similar way, for a commutative ring R the group GL(n, R) may be interpreted as the group of automorphisms of a free R-module M of rank n. One can also define GL(M) for any R-module, but in general this is not isomorphic to GL(n, R) (for any n).

Over a field F, a matrix is invertible if and only if its determinant is nonzero. Therefore an alternative definition of GL(n, F) is as the group of matrices with nonzero determinant.

Over a non-commutative ring R, determinants are not at all well behaved. In this case, GL(n, R) may be defined as the unit group of the matrix ring M(n, R).

As a Lie group

The general linear group GL(n,R) over the field of real numbers is a real Lie group of dimension n2. To see this, note that the set of all n×n real matrices, Mn(R), forms a real vector space of dimension n2. The subset GL(n,R) consists of those matrices whose determinant is non-zero. The determinant is a polynomial map, and hence GL(n,R) is an open affine subvariety of Mn(R) (a non-empty open subset of Mn(R) in the Zariski topology), and therefore[2] a smooth manifold of the same dimension.

The Lie algebra of GL(n,R), denoted

consists of all n×n real matrices with the commutator serving as the Lie bracket.

The general linear GL(n,C) over the field of complex numbers is a complex Lie group of complex dimension n2. As a real Lie group it has dimension 2n2. The set of all real matrices forms a real Lie subgroup. These correspond to the inclusions

which have real dimensions n2, 2n2, and 4n2 = (2n)2. Complex n-dimensional matrices can be characterized as real 2n-dimensional matrices that preserve a linear complex structure — concretely, that commute with a matrix J such that J2 = −I, where J corresponds to multiplying by the imaginary unit i.

The Lie algebra corresponding to GL(n,C) consists of all n×n complex matrices with the commutator serving as the Lie bracket. 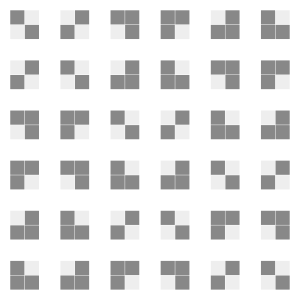 More generally, one can count points of Grassmannian over F: in other words the number of subspaces of a given dimension k. This requires only finding the order of the stabilizer subgroup of one such subspace and dividing into the formula just given, by the orbit-stabilizer theorem.

These formulas are connected to the Schubert decomposition of the Grassmannian, and are q-analogs of the Betti numbers of complex Grassmannians. This was one of the clues leading to the Weil conjectures.

Note that in the limit q ↦ 1 the order of GL(n,q) goes to 0! — but under the correct procedure (dividing by (q-1)^n) we see that it is the order of the symmetric group (See Lorscheid's article) — in the philosophy of the field with one element, one thus interprets the symmetric group as the general linear group over the field with one element: Sn ≅ GL(n,1).

The general linear group over a prime field, GL(ν,p), was constructed and its order computed by Évariste Galois in 1832, in his last letter (to Chevalier) and second (of three) attached manuscripts, which he used in the context of studying the Galois group of the general equation of order pν.[4]

If we write F× for the multiplicative group of F (excluding 0), then the determinant is a group homomorphism

that is surjective and its kernel is the special linear group. Therefore, by the first isomorphism theorem, GL(n,F)/SL(n,F) is isomorphic to F×. In fact, GL(n,F) can be written as a semidirect product:

When F is R or C, SL(n,F) is a Lie subgroup of GL(n,F) of dimension n2 − 1. The Lie algebra of SL(n,F) consists of all n×n matrices over F with vanishing trace. The Lie bracket is given by the commutator.

The special linear group SL(n,R) can be characterized as the group of volume and orientation preserving linear transformations of Rn.

The set of all invertible diagonal matrices forms a subgroup of GL(n, F) isomorphic to (F×)n. In fields like R and C, these correspond to rescaling the space; the so-called dilations and contractions.

A scalar matrix is a diagonal matrix which is a constant times the identity matrix. The set of all nonzero scalar matrices forms a subgroup of GL(n, F) isomorphic to F× . This group is the center of GL(n, F). In particular, it is a normal, abelian subgroup.

The center of SL(n, F) is simply the set of all scalar matrices with unit determinant, and is isomorphic to the group of nth roots of unity in the field F.

The so-called classical groups are subgroups of GL(V) which preserve some sort of bilinear form on a vector space V. These include the

The affine group Aff(n,F) is an extension of GL(n,F) by the group of translations in Fn. It can be written as a semidirect product:

where GL(n, F) acts on Fn in the natural manner. The affine group can be viewed as the group of all affine transformations of the affine space underlying the vector space Fn.

One has analogous constructions for other subgroups of the general linear group: for instance, the special affine group is the subgroup defined by the semidirect product, SL(n, F) ⋉ Fn, and the Poincaré group is the affine group associated to the Lorentz group, O(1,3,F) ⋉ Fn.

where Gal(F) is the Galois group of F (over its prime field), which acts on GL(n, F) by the Galois action on the entries.

The main interest of ΓL(n, F) is that the associated projective semilinear group PΓL(n, F) (which contains PGL(n, F)) is the collineation group of projective space, for n > 2, and thus semilinear maps are of interest in projective geometry.

It is used in algebraic K-theory to define K1, and over the reals has a well-understood topology, thanks to Bott periodicity.

It should not be confused with the space of (bounded) invertible operators on a Hilbert space, which is a larger group, and topologically much simpler, namely contractible — see Kuiper's theorem.