In mathematics, Green's theorem gives the relationship between a line integral around a simple closed curve C and a double integral over the plane region D bounded by C. It is named after George Green [1] and is the two-dimensional special case of the more general Kelvin–Stokes theorem.

Let C be a positively oriented, piecewise smooth, simple closed curve in a plane, and let D be the region bounded by C. If L and M are functions of (x, y) defined on an open region containing D and have continuous partial derivatives there, then[2][3]

where the path of integration along C is counterclockwise.

In physics, Green's theorem is mostly used to solve two-dimensional flow integrals, stating that the sum of fluid outflows at any point inside a volume is equal to the total outflow summed about an enclosing area. In plane geometry, and in particular, area surveying, Green's theorem can be used to determine the area and centroid of plane figures solely by integrating over the perimeter.

Proof when D is a simple region 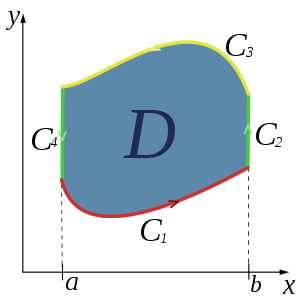 If D is a simple region with its boundary consisting of the curves C1, C2, C3, C4, half of Green's theorem can be demonstrated.

The following is a proof of half of the theorem for the simplified area D, a type I region where C2 and C4 are vertical lines (possibly of zero length). A similar proof exists for the other half of the theorem when D is a type II region where C1 and C3 are horizontal lines (again, possibly of zero length). Putting these two parts together, the theorem is thus proven for regions of type III (defined as regions which are both type I and type II). The general case can then be deduced from this special case by decomposing D into a set of type III regions.

If it can be shown that

Assume region D is a type I region and can thus be characterized, as pictured on the right, by

where g1 and g2 are continuous functions on [a, b]. Compute the double integral in (1):

The integral over C3 is negated because it goes in the negative direction from b to a, as C is oriented positively (counterclockwise). On C2 and C4, x remains constant, meaning

Relationship to the Stokes theorem

Green's theorem is a special case of the Kelvin–Stokes theorem, when applied to a region in the xy-plane:

. Start with the left side of Green's theorem:

is just the region in the plane

, with the unit normals

pointing up (in the positive z direction) to match the "positive orientation" definitions for both theorems.

The expression inside the integral becomes

Thus we get the right side of Green's theorem

Relationship to the divergence theorem

is the divergence on the two-dimensional vector field

is the outward-pointing unit normal vector on the boundary.

To see this, consider the unit normal

in the right side of the equation. Since in Green's theorem

is a vector pointing tangential along the curve, and the curve C is the positively-oriented (i.e. counterclockwise) curve along the boundary, an outward normal would be a vector which points 90° to the right of this; one choice would be

. The length of this vector is

Start with the left side of Green's theorem:

Applying the two-dimensional divergence theorem with

, we get the right side of Green's theorem:

Green's theorem can be used to compute area by line integral.[4] The area of D is given by:

Provided we choose L and M such that:

Then the area is given by:

Possible formulas for the area of D include:[4]