In mathematics, a group extension is a general means of describing a group in terms of a particular normal subgroup and quotient group. If Q and N are two groups, then G is an extension of Q by N if there is a short exact sequence

If G is an extension of Q by N, then G is a group, N is a normal subgroup of G and the quotient group G/N is isomorphic to the group Q. Group extensions arise in the context of the extension problem, where the groups Q and N are known and the properties of G are to be determined.

An extension is called a central extension if the subgroup N lies in the center of G.

One extension, the direct product, is immediately obvious. If one requires G and Q to be abelian groups, then the set of isomorphism classes of extensions of Q by a given (abelian) group N is in fact a group, which is isomorphic to

cf. the Ext functor. Several other general classes of extensions are known but no theory exists which treats all the possible extensions at one time. Group extension is usually described as a hard problem; it is termed the extension problem.

The question of what groups G are extensions of H by N is called the extension problem, and has been studied heavily since the late nineteenth century. As to its motivation, consider that the composition series of a finite group is a finite sequence of subgroups {Ai}, where each Ai+1 is an extension of Ai by some simple group. The classification of finite simple groups gives us a complete list of finite simple groups; so the solution to the extension problem would give us enough information to construct and classify all finite groups in general.

Solving the extension problem amounts to classifying all extensions of H by K; or more practically, by expressing all such extensions in terms of mathematical objects that are easier to understand and compute. In general, this problem is very hard, and all the most useful results classify extensions that satisfy some additional condition. That is why it is very important to know when two extensions are equivalent or congruent.

We say that the extensions

are equivalent (or congruent) if there exists a group isomorphism

making commutative the diagram of Figure 1. In fact it is sufficient to have a group homomorphism, by the commutativity of the diagram, it will be automatically an isomorphism. 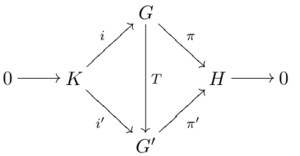 A trivial extension is an extension

that is equivalent to the extension

where the left and right arrows are respectively the inclusion and the projection of each factor of :

A split extension is an extension

such that going from H to G by s and then back to H by the quotient map of the short exact sequence induces the identity map on H i.e. :

. In this situation, it is usually said that s splits the above exact sequence.

, where Aut(K) is the automorphism group of K. For a full discussion of why this is true, see semidirect product.

In general in mathematics, an extension of a structure K is usually regarded as a structure L of which K is a substructure. See for example field extension. However in group theory the opposite terminology has crept in, partly because of the notation

, which reads easily as extensions of Q by N, and the focus is on the group Q.

The paper of Brown and Porter (1996) on the Schreier theory of nonabelian extensions (cited below) uses the terminology that an extension of K gives a larger structure.

such that A is in Z(E), the center of the group E. The set of isomorphism classes of central extensions of G by A (where G acts trivially on A) is in one-to-one correspondence with the cohomology group H2(G,A).

Examples of central extensions can be constructed by taking any group G and any abelian group A, and setting E to be A×G. This kind of split example (a split extension in the sense of the extension problem, since G is present as a subgroup of E) isn't of particular interest, since it corresponds to the element 0 in H2(G,A) under the above correspondence. More serious examples are found in the theory of projective representations, in cases where the projective representation cannot be lifted to an ordinary linear representation.

In the case of finite perfect groups, there is a universal perfect central extension.

Similarly, the central extension of a Lie algebra is an exact sequence

is in the center of

There is a general theory of central extensions in Maltsev varieties, see the paper by Janelidze and Kelly listed below.

is a group homomorphism, and surjective. (The group structure on G* depends on the choice of an identity element mapping to the identity in G.) For example, when G* is the universal cover of G, the kernel of π is the fundamental group of G, which is known to be abelian (see H-space). Conversely, given a Lie group G and a discrete central subgroup Z, the quotient G/Z is a Lie group and G is a covering space of it.

The basic examples of central extensions as covering groups are:

The case of SL2(R) involves a fundamental group that is infinite cyclic. Here the central extension involved is well known in modular form theory, in the case of forms of weight ½. A projective representation that corresponds is the Weil representation, constructed from the Fourier transform, in this case on the real line. Metaplectic groups also occur in quantum mechanics.