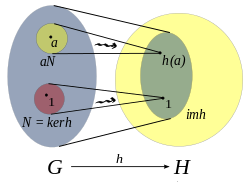 Image of a Group homomorphism(h) from G(left) to H(right). The smaller oval inside H is the image of h. N is the kernel of h and aN is a coset of N.

where the group operation on the left hand side of the equation is that of G and on the right hand side that of H.

Hence one can say that h "is compatible with the group structure".

Older notations for the homomorphism h(x) may be xh, though this may be confused as an index or a general subscript. A more recent trend is to write group homomorphisms on the right of their arguments, omitting brackets, so that h(x) becomes simply x h. This approach is especially prevalent in areas of group theory where automata play a role, since it accords better with the convention that automata read words from left to right.

In areas of mathematics where one considers groups endowed with additional structure, a homomorphism sometimes means a map which respects not only the group structure (as above) but also the extra structure. For example, a homomorphism of topological groups is often required to be continuous.

and the image of h to be

The homomorphism h is injective (and called a group monomorphism) if and only if ker(h) = {eG}.

The kernel and image of a homomorphism can be interpreted as measuring how close it is to being an isomorphism. The First Isomorphism Theorem states that the image of a group homomorphism, h(G) is isomorphic to the quotient group G/ker h.

For any complex number u the function fu : G → C defined by:

is a group homomorphism.

is a group homomorphism.

The category of groups

If the homomorphism h is a bijection, then one can show that its inverse is also a group homomorphism, and h is called a group isomorphism; in this case, the groups G and H are called isomorphic: they differ only in the notation of their elements and are identical for all practical purposes.

If G and H are abelian (i.e. commutative) groups, then the set Hom(G, H) of all group homomorphisms from G to H is itself an abelian group: the sum h + k of two homomorphisms is defined by

The commutativity of H is needed to prove that h + k is again a group homomorphism.

This shows that the set End(G) of all endomorphisms of an abelian group forms a ring, the endomorphism ring of G. For example, the endomorphism ring of the abelian group consisting of the direct sum of m copies of Z/nZ is isomorphic to the ring of m-by-m matrices with entries in Z/nZ. The above compatibility also shows that the category of all abelian groups with group homomorphisms forms a preadditive category; the existence of direct sums and well-behaved kernels makes this category the prototypical example of an abelian category.