In graph theory, a Halin graph is a type of planar graph. It is constructed from a tree that has at least four vertices, none of which have exactly two neighbors. The tree is drawn in the plane so none of its edges cross; then edges are added that connect all its leaves into a cycle.[1] Halin graphs are named after German mathematician Rudolf Halin, who studied them in 1971,[2] but the cubic Halin graphs had already been studied over a century earlier by Kirkman.[3]

A triangular prism, constructed as a Halin graph from a six-vertex tree

A Halin graph is constructed as follows. Let

be a tree with more than three vertices, such that no vertex of

has degree two (that is, no vertex has exactly two neighbors), embedded in the plane. Then a Halin graph is constructed by adding to

a cycle through each of its leaves, such that the augmented graph remains planar. 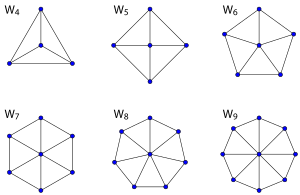 A star is a tree with exactly one internal vertex. Applying the Halin graph construction to a star produces a wheel graph, the graph of a pyramid. The graph of a triangular prism is also a Halin graph: it can be drawn so that one of its rectangular faces is the exterior cycle, and the remaining edges form a tree with four leaves, two interior vertices, and five edges.

The Frucht graph, one of the two smallest cubic graphs with no nontrivial graph automorphisms, is also a Halin graph.

Every Halin graph is 3-connected, meaning that it is not possible to delete two vertices from it and disconnect the remaining vertices. It is edge-minimal 3-connected, meaning that if any one of its edges is removed, the remaining graph will no longer be 3-connected.[1] By Steinitz's theorem, as a 3-connected planar graph, it can be represented as the set of vertices and edges of a convex polyhedron; that is, it is a polyhedral graph. And, as with every polyhedral graph, its planar embedding is unique up to the choice of which of its faces is to be the outer face.[1]

Every Halin graph has treewidth at most three.[6] Therefore, many graph optimization problems that are NP-complete for arbitrary planar graphs, such as finding a maximum independent set, may be solved in linear time on Halin graphs using dynamic programming.[7]

In 1971, Halin introduced the Halin graphs as a class of minimally 3-vertex-connected graphs: for every edge in the graph, the removal of that edge reduces the connectivity of the graph.[2] These graphs gained in significance with the discovery that many algorithmic problems that were computationally infeasible for arbitrary planar graphs could be solved efficiently on them,[4][8] a fact that was later explained to be a consequence of their low treewidth.[6][7]