In classical mechanics, a harmonic oscillator is a system that, when displaced from its equilibrium position, experiences a restoring force, F, proportional to the displacement, x:

where k is a positive constant.

If a frictional force (damping) proportional to the velocity is also present, the harmonic oscillator is described as a damped oscillator. Depending on the friction coefficient, the system can:

If an external time dependent force is present, the harmonic oscillator is described as a driven oscillator.

A simple harmonic oscillator is an oscillator that is neither driven nor damped. It consists of a mass m, which experiences a single force, F, which pulls the mass in the direction of the point x=0 and depends only on the mass's position x and a constant k. Balance of forces (Newton's second law) for the system is

Solving this differential equation, we find that the motion is described by the function

The motion is periodic, repeating itself in a sinusoidal fashion with constant amplitude, A. In addition to its amplitude, the motion of a simple harmonic oscillator is characterized by its period T, the time for a single oscillation or its frequency f = Template:Frac, the number of cycles per unit time. The position at a given time t also depends on the phase, φ, which determines the starting point on the sine wave. The period and frequency are determined by the size of the mass m and the force constant k, while the amplitude and phase are determined by the starting position and velocity. 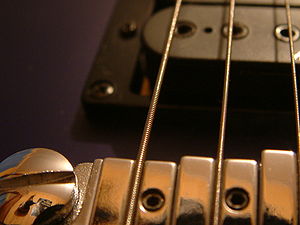 When no external forces are present (i.e. when

), this can be rewritten into the form

is called the 'undamped angular frequency of the oscillator' and

is called the 'damping ratio'. 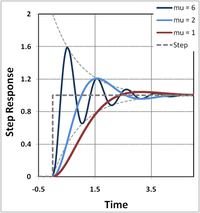 Step-response of a damped harmonic oscillator; curves are plotted for three values of μ = ω1 = ω0Template:Radic. Time is in units of the decay time τ = 1/(ζω0).

The value of the damping ratio ζ critically determines the behavior of the system. A damped harmonic oscillator can be:

The Q factor of a damped oscillator is defined as

Q is related to the damping ratio by the equation

It is usually rewritten into the form

This equation can be solved exactly for any driving force, using the solutions z(t) which satisfy the unforced equation:

and which can be expressed as damped sinusoidal oscillations,

in the case where ζ ≤ 1. The amplitude A and phase φ determine the behavior needed to match the initial conditions.

with phase φ given by

The time an oscillator needs to adapt to changed external conditions is of the order τ = 1/(ζω0). In physics, the adaptation is called relaxation, and τ is called the relaxation time. 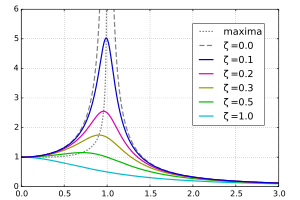 of a driven simple harmonic oscillator.

In the case of a sinusoidal driving force:

is the driving amplitude and

is the driving frequency for a sinusoidal driving mechanism. This type of system appears in AC driven RLC circuits (resistor-inductor-capacitor) and driven spring systems having internal mechanical resistance or external air resistance.

, and the damping ratio

is the phase of the oscillation relative to the driving force, if the arctan value is taken to be between -180 degrees and 0 (that is, it represents a phase lag, for both positive and negative values of the arctan's argument).

For a particular driving frequency called the resonance, or resonant frequency

, the amplitude (for a given

) is maximum. This resonance effect only occurs when

The transient solutions are the same as the unforced (

) damped harmonic oscillator and represent the systems response to other events that occurred previously. The transient solutions typically die out rapidly enough that they can be ignored.

{{#invoke:main|main}} A parametric oscillator is a driven harmonic oscillator in which the drive energy is provided by varying the parameters of the oscillator, such as the damping or restoring force. A familiar example of parametric oscillation is "pumping" on a playground swing.[1][2][3] A person on a moving swing can increase the amplitude of the swing's oscillations without any external drive force (pushes) being applied, by changing the moment of inertia of the swing by rocking back and forth ("pumping") or alternately standing and squatting, in rhythm with the swing's oscillations. The varying of the parameters drives the system. Examples of parameters that may be varied are its resonance frequency

Parametric oscillators have been developed as low-noise amplifiers, especially in the radio and microwave frequency range. Thermal noise is minimal, since a reactance (not a resistance) is varied. Another common use is frequency conversion, e.g., conversion from audio to radio frequencies. For example, the Optical parametric oscillator converts an input laser wave into two output waves of lower frequency (

Parametric resonance occurs in a mechanical system when a system is parametrically excited and oscillates at one of its resonant frequencies. Parametric excitation differs from forcing, since the action appears as a time varying modification on a system parameter. This effect is different from regular resonance because it exhibits the instability phenomenon.

is known as the universal oscillator equation since all second order linear oscillatory systems can be reduced to this form. This is done through nondimensionalization.

The solution to this differential equation contains two parts, the "transient" and the "steady state".

The transient solution is independent of the forcing function.

Apply the "complex variables method" by solving the auxiliary equation below and then finding the real part of its solution:

Supposing the solution is of the form

Its derivatives from zero to 2nd order are

Substituting these quantities into the differential equation gives

Dividing by the exponential term on the left results in

Bode plot of the frequency response of an ideal harmonic oscillator.

Squaring both equations and adding them together gives

Compare this result with the theory section on resonance, as well as the "magnitude part" of the RLC circuit. This amplitude function is particularly important in the analysis and understanding of the frequency response of second-order systems.

To solve for φ, divide both equations to get

This phase function is particularly important in the analysis and understanding of the frequency response of second-order systems.

For a more complete description of how to solve the above equation, see linear ODEs with constant coefficients.

{{#invoke:main|main}} Harmonic oscillators occurring in a number of areas of engineering are equivalent in the sense that their mathematical models are identical (see universal oscillator equation above). Below is a table showing analogous quantities in four harmonic oscillator systems in mechanics and electronics. If analogous parameters on the same line in the table are given numerically equal values, the behavior of the oscillators—their output waveform, resonant frequency, damping factor, etc.—are the same.

Application to a conservative force

Given an arbitrary potential energy function

, one can do a Taylor expansion in terms of

around an energy minimum (

) to model the behavior of small perturbations from equilibrium.

is a minimum, the first derivative evaluated at

must be zero, so the linear term drops out:

The constant term V(x0) is arbitrary and thus may be dropped, and a coordinate transformation allows the form of the simple harmonic oscillator to be retrieved:

with a non-vanishing second derivative, one can use the solution to the simple harmonic oscillator to provide an approximate solution for small perturbations around the equilibrium point. 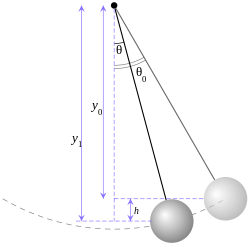 A simple pendulum exhibits simple harmonic motion under the conditions of no damping and small amplitude.

Assuming no damping and small amplitudes, the differential equation governing a simple pendulum is

The solution to this equation is given by:

is the largest angle attained by the pendulum. The period, the time for one complete oscillation, is given by

Simple harmonic motion can in some cases be considered to be the one-dimensional projection of two-dimensional circular motion. Consider a long pendulum swinging over the turntable of a record player. On the edge of the turntable there is an object. If the object is viewed from the same level as the turntable, a projection of the motion of the object seems to be moving backwards and forwards on a straight line orthogonal to the view direction, sinusoidally like the pendulum.

Spring–mass system in equilibrium (A), compressed (B) and stretched (C) states.

where F is the force, k is the spring constant, and x is the displacement of the mass with respect to the equilibrium position. The minus sign in the equation indicates that the force exerted by the spring always acts in a direction that is opposite to the displacement (i.e. the force always acts towards the zero position), and so prevents the mass from flying off to infinity.

By using either force balance or an energy method, it can be readily shown that the motion of this system is given by the following differential equation:

...the latter being Newton's second law of motion.

If the initial displacement is A, and there is no initial velocity, the solution of this equation is given by:

Given an ideal massless spring,

is the mass on the end of the spring. If the spring itself has mass, its effective mass must be included in

Energy variation in the spring–damping system