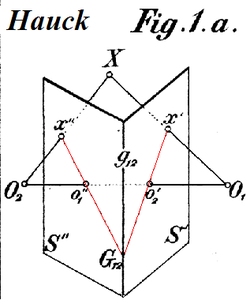 In the field of computer vision, any two images of the same planar surface in space are related by a homography (assuming a pinhole camera model). This has many practical applications, such as image rectification, image registration, or computation of camera motion—rotation and translation—between two images. Once camera rotation and translation have been extracted from an estimated homography matrix, this information may be used for navigation, or to insert models of 3D objects into an image or video, so that they are rendered with the correct perspective and appear to have been part of the original scene (see Augmented reality).

We have two cameras a and b, looking at points

in a plane. Passing the projections of

in b to a point

where the homography matrix

is the rotation matrix by which b is rotated in relation to a; t is the translation vector from a to b; n and d are the normal vector of the plane and the distance to the plane respectively. Ka and Kb are the cameras' intrinsic parameter matrices. 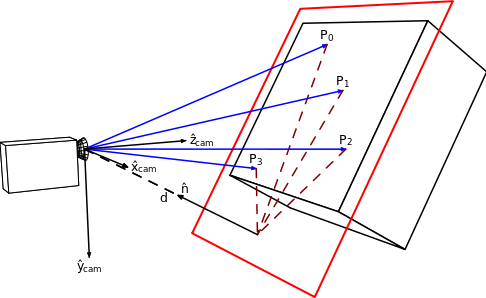 The figure shows camera b looking at the plane at distance d. Note: From above figure, assuming

is the projection of vector

This formula is only valid if camera b has no rotation and no translation. In the general case where

are the respective rotations and translations of camera a and b,

and the homography matrix

where d is the distance of the camera b to the plane.