Hue in the HSB/HSL encodings of RGB 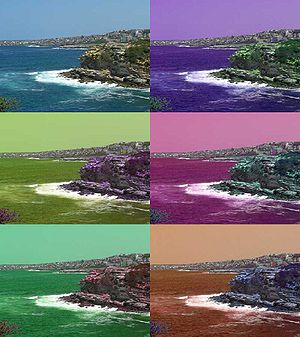 An image with the hues cyclically shifted in HSL space

The hues in this image of a Painted Bunting are cyclically rotated over time.

Hue is one of the main properties of a color, defined technically (in the CIECAM02 model), as "the degree to which a stimulus can be described as similar to or different from stimuli that are described as red, green, blue, and yellow,"[1] (the unique hues). Orange and violet (purple) are the other hues, for a total of six, as in the rainbow: red, orange, yellow, green, blue, violet. The other main correlatives of color appearance are colorfulness, chroma, saturation, lightness, and brightness.

Usually, colors with the same hue are distinguished with adjectives referring to their lightness and/or colorfulness, such as with "light blue", "pastel blue", "vivid blue". Exceptions include brown, which is a dark orange,[2] and pink, a light red with reduced chroma.

In painting color theory, a hue refers to a pure color—one without tint or shade (added white or black pigment, respectively).[3] A hue is an element of the color wheel. Hues are first processed in the brain in areas in the extended V4 called globs.[4][5]

In opponent color spaces in which two of the axes are perceptually orthogonal to lightness, such as the CIE 1976 (L*, a*, b*) (CIELAB) and 1976 (L*, u*, v*) (CIELUV) color spaces, hue may be computed together with chroma by converting these coordinates from rectangular form to polar form. Hue is the angular component of the polar representation, while chroma is the radial component.

Where, atan2 is a two-argument inverse tangent.

Preucil[7] describes a color hexagon, similar to a trilinear plot described by Evans, Hanson, and Brewer,[8] which may be used to compute hue from RGB. To place red at 0°, green at 120°, and blue at 240°.

Equivalently, one may solve:

Preucil used a polar plot, which he termed a color circle.[7] Using R, G, and B, one may compute hue angle using the following scheme: determine which of the six possible orderings of R, G, and B prevail, then apply the formula given in the table below. 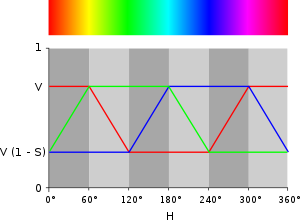 An illustration of the relationship between the "hue" of colors with maximal saturation in HSV and HSL with their corresponding RGB coordinates.

Note that in each case the formula contains the fraction

, where H is the highest of R, G, and B; L is the lowest, and M is the mid one between the other two. This is referred to as the Preucil Hue Error, and was used in the computation of mask strength in photomechanical color reproduction.[9]

Hue angles computed for the Preucil circle agree with the hue angle computed for the Preucil Hexagon at integer multiples of 30 degrees (red, yellow, green, cyan, blue, magenta, and the colors mid-way between contiguous pairs) and differ by approximately 1.2 degrees at odd integer multiples of 15 degrees (based on the circle formula), the maximum divergence between the two.

The process of converting an RGB color into an HSL color space or HSV color space is usually based on a 6-piece piecewise mapping, treating the HSV cone as a hexacone, or the HSL double cone as a double hexacone.[10] The formulae used are those in the table above.

The hues exhibited by caramel colorings and beers are fairly limited in range. The Linner hue index is used to quantify the hue of such products.

Manufacturers of pigments use the word hue e.g. 'Cadmium Yellow (hue)' to indicate that the original pigmentation ingredient, often toxic, has been replaced by safer (or cheaper) alternatives whilst retaining the hue of the original. Replacements are often used for chromium, cadmium and alizarin.

in CIELUV. The other is computed as the residual total color difference after Lightness and Chroma differences have been accounted for; its symbol is

Names and other notations for hues

There exists some correspondence, more or less precise, between hue values and color terms (names). One approach in color science is to use traditional color terms but try to give them more precise definitions. See spectral color#Table of spectral or near-spectral colors for names of highly saturated colors with the hue from ≈ 0° (red) up to ≈ 275° (violet), and line of purples#Table of highly-saturated purple colors for color terms of the remaining part of the color wheel.

Alternative approach is to use a systematic notation. It can be a standard angle notation for certain color model such as HSL/HSV mentioned above, CIELUV, or CIECAM02. Alphanumeric notations such as of Munsell color system, NCS, and Pantone Matching System are also used.