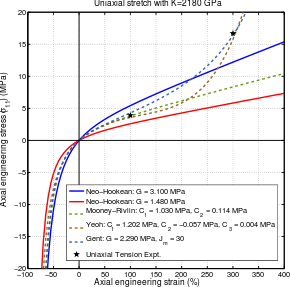 For many materials, linear elastic models do not accurately describe the observed material behaviour. The most common example of this kind of material is rubber, whose stress-strain relationship can be defined as non-linearly elastic, isotropic, incompressible and generally independent of strain rate. Hyperelasticity provides a means of modeling the stress-strain behavior of such materials.[2] The behavior of unfilled, vulcanized elastomers often conforms closely to the hyperelastic ideal. Filled elastomers and biological tissues are also often modeled via the hyperelastic idealization.

is the second Piola–Kirchhoff stress and

is the Lagrangian Green strain, and

are the Lamé constants.

The strain-energy density function for the St. Venant–Kirchhoff model is

Hyperelastic material models can be classified as:

3) hybrids of phenomenological and mechanistic models

is the strain energy density function, the 1st Piola–Kirchhoff stress tensor can be calculated for a hyperelastic material as

is the deformation gradient. In terms of the Lagrangian Green strain (

is the second Piola–Kirchhoff stress tensor then

The above relation is also known as the Doyle-Ericksen formula in the material configuration.

Similarly, the Cauchy stress is given by

The above expression can also be expressed in terms of the left Cauchy-Green deformation tensor. In that case [3]

For an incompressible material

. The incompressibility constraint is therefore

. To ensure incompressibility of a hyperelastic material, the strain-energy function can be written in form:

where the hydrostatic pressure

functions as a Lagrangian multiplier to enforce the incompressibility constraint. The 1st Piola–Kirchhoff stress now becomes

Expressions for the Cauchy stress

(See the page on the left Cauchy–Green deformation tensor for the definitions of these symbols).

. The Cauchy stress is then given by

is an undetermined pressure. In terms of stress differences

Consistency with linear elasticity is often used to determine some of the parameters of hyperelastic material models. These consistency conditions can be found by comparing Hooke's law with linearized hyperelasticity at small strains.

For isotropic hyperelastic materials to be consistent with isotropic linear elasticity, the stress-strain relation should have the following form in the infinitesimal strain limit:

are the Lame constants. The strain energy density function that corresponds to the above relation is[1]

For an incompressible material

For any strain energy density function

If the material is incompressible then the above conditions may be expressed in the following form.

These conditions can be used to find relations between the parameters of a given hyperelastic model and shear and bulk moduli.

. For such materials we have

. The consistency conditions for incompressible materials for

may then be expressed as

The second consistency condition above can be derived by noting that

The can then be substituted into the consistency condition for isotropic incompressible hyperelastic materials.