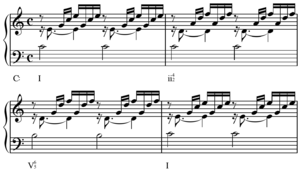 The ii-V-I turnaround, ii-V-I progression, or ii V I, also known as the dominant cadence, is a common cadential chord progression used in a wide variety of music genres, especially jazz harmony. It is a succession of chords whose roots descend in fifths from the second degree, or supertonic, to the fifth degree, or dominant, and finally to the tonic. In a major key, the supertonic (ii) triad is minor, while in a minor key, this triad is diminished. The dominant chord is, in its most basic form, a major triad and, commonly, a dominant seventh chord. With the addition of chord alterations, substitutions, and extensions (most often sevenths), limitless variations exist on this simple formula.

ii-V-I progressions are extremely common in jazz. They serve two primary functions, which are often intertwined: to temporarily imply passing tonalities, and to lead strongly toward a goal (the "I" chord). One potential situation where ii-V-I progressions can be put to use is in a blues, whose generic form has no such progressions. In this example, a simple 12-bar F blues is shown followed by a similar one with some basic ii-V-I substitutions:

In bar 4, instead of the simple V I root motion in the original blues, the ii chord of the BTemplate:Music7 (Cm) is included so that the measure is even more directed toward the following downbeat with the BTemplate:Music7. In bars 8-10, instead of leading back to the tonic with the standard V-IV-I (blues cadence), a series of applied ii-V-I progressions is used to first lead to Gm, which then itself is reinterpreted as a ii and used to lead back to F7 through its own V, which is C7. In the last bar (the "turnaround"), the same type of substitution is used as that in bar 4. In practice, musicians will often add extensions to the basic chords shown here, especially 7ths, 9ths, and 13ths, as seen in this example:

The ii is sometimes replaced by the II7, giving it a more dissonant, bluesy feel; this is especially common in turnarounds. Additionally, the ii can be treated like a temporary minor tonic, and preceded by its own "ii-V", extending the basic progression to a iii-VI-ii-V-I; again, this is quite common in turnarounds (with the iii-VI replacing the I in the second-to-last bar; in the example above, the last two bars would change from F7 | Gm-C7 to Am-D7 | Gm-C7).

Four-voice classical, three-voice and four-voice jazz "versions" [voicings] of the ii-V7-I progression. The classical example features inversions to emphasize the bass line's independence while the jazz examples feature root progression by fifths and "perfectly smooth voice leading" produced by the 7th of each chord falling a semitone to become the 3rd while the 3rd becomes the 7th of that chord.[4]

The ii-V pair is also sometimes used without function (actually i-IV) in place of a minor tonic, to accommodate be-bop improvisations.[5]

ii-V-I is part of the vi-ii-V-I progression of root movement by descending fifths, which establishes tonality and also strengthens the key through the contrast of minor and major.[6]

In the tonal tradition, the ii-V-I progression is most often reserved for cadences, and is one of many often used cadential progressions. The ii, V, and I can all appear in inversion, although usually without significant alteration beyond the addition of sevenths. One very common implementation of ii-V-I in a classical piece would be this progression, where the ii chord appears in first inversion:

In minor, a seventh chord built on the supertonic yields a half-diminished seventh chord, which is a very strong predominant chord. Due to what is considered the harsh nature of root position diminished chords, the iiTemplate:Music chord most often appears in first inversion.

The iiTemplate:Music chord appears in the natural minor scale and may be considered a minor seventh chord with a flatted fifth and is used in the ii-V-I in minor[8]