Not to be confused with Inequation. "Less than", "Greater than", and "More than" redirect here. For the use of the "<" and ">" signs as punctuation, see Bracket. For the UK insurance brand "More Th>n", see RSA Insurance Group. 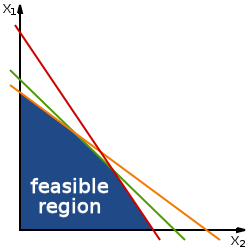 The feasible regions of linear programming are defined by a set of inequalities.

In mathematics, an inequality is a relation that holds between two values when they are different (see also: equality).

It does not say that one is greater than the other, or even that they can be compared in size.

If the values in question are elements of an ordered set, such as the integers or the real numbers, they can be compared in size.

In either case, a is not equal to b. These relations are known as strict inequalities. The notation a < b may also be read as "a is strictly less than b".

In contrast to strict inequalities, there are two types of inequality relations that are not strict:

An additional use of the notation is to show that one quantity is much greater than another, normally by several orders of magnitude.

The Transitive property of inequality states:

The relations ≤ and ≥ are each other's converse:

A common constant c may be added to or subtracted from both sides of an inequality:

i.e., the real numbers are an ordered group under addition. 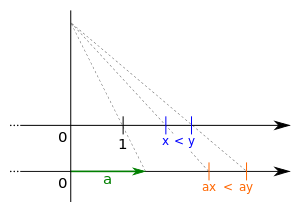 The properties that deal with multiplication and division state:

More generally, this applies for an ordered field, see below.

The properties for the additive inverse state:

The properties for the multiplicative inverse state:

These can also be written in chained notation as:

Applying a function to both sides

As an example, consider the application of the natural logarithm to both sides of an inequality when a and b are positive real numbers:

This is true because the natural logarithm is a strictly increasing function.

The notation a < b < c stands for "a < b and b < c", from which, by the transitivity property above, it also follows that a < c. Obviously, by the above laws, one can add/subtract the same number to all three terms, or multiply/divide all three terms by same nonzero number and reverse all inequalities according to sign. Hence, for example, a < b + e < c is equivalent to a − e < b < c − e.

When solving inequalities using chained notation, it is possible and sometimes necessary to evaluate the terms independently. For instance to solve the inequality 4x < 2x + 1 ≤ 3x + 2, it is not possible to isolate x in any one part of the inequality through addition or subtraction. Instead, the inequalities must be solved independently, yielding x < 1/2 and x ≥ −1 respectively, which can be combined into the final solution −1 ≤ x < 1/2.

Occasionally, chained notation is used with inequalities in different directions, in which case the meaning is the logical conjunction of the inequalities between adjacent terms. For instance, a < b = c ≤ d means that a < b, b = c, and c ≤ d. This notation exists in a few programming languages such as Python.

A "Power inequality" is an inequality containing ab terms, where a and b are real positive numbers or variable expressions. They often appear in mathematical olympiads exercises.

Mathematicians often use inequalities to bound quantities for which exact formulas cannot be computed easily. Some inequalities are used so often that they have names:

The set of complex numbers

with its operations of addition and multiplication is a field, but it is impossible to define any relation ≤ so that

becomes an ordered field. To make

an ordered field, it would have to satisfy the following two properties:

However, an operation ≤ can be defined so as to satisfy only the first property (namely, "if a ≤ b then a + c ≤ b + c"). Sometimes the lexicographical order definition is used:

Inequality relationships similar to those defined above can also be defined for column vector. If we let the vectors

are real numbers for

), we can define the following relationships.

Similarly, we can define relationships for

. We note that this notation is consistent with that used by Matthias Ehrgott in Multicriteria Optimization (see References).

The property of Trichotomy (as stated above) is not valid for vector relationships. For example, when

, there exists no valid inequality relationship between these two vectors. Also, a multiplicative inverse would need to be defined on a vector before this property could be considered. However, for the rest of the aforementioned properties, a parallel property for vector inequalities exists.

where X is a vector of the variables

and A is a matrix. This has a solution, for example, when there is at least one positive element on the main diagonal of A.

Systems of inequalities can be written in terms of matrices A, B, C, etc. and the conditions for existence of solutions can be written as complicated expressions in terms of these matrices. The solution for two polynomial inequalities in two variables tells us whether two conic section regions overlap or are inside each other. The general solution is not known but such a solution could be theoretically used to solve such unsolved problems as the kissing number problem. However, the conditions would be so complicated as to require a great deal of computing time or clever algorithms.