In two dimensional geometry, the infinite dihedral group represents the 4th frieze group symmetry, p1m1, seen as an infinite set of parallel reflections along an axis.

and is isomorphic to a semidirect product of Z and Z/2, and to the free product Z/2 * Z/2. It is the automorphism group of the graph consisting of a path infinite to both sides. Correspondingly, it is the isometry group of Z (see also symmetry groups in one dimension), the group of permutations α: Z → Z satisfying |i - j| = |α(i) - α(j)|, for all i, j in Z.[2]

The infinite dihedral group can also be defined as the holomorph of the infinite cyclic group. 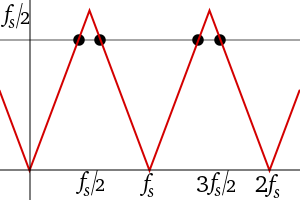 When periodically sampling a signal, the detected frequency exhibits infinite dihedral symmetry, as exhibited in the graph of the detected frequency (equivalence class using the fundamental domain [0, 0.5fs]). Here a horizontal line (demonstrating the many-to-one phenomenon of aliasing) is shown, passing through 0.4fs, 0.6fs, 1.4fs and 1.6fs all of which thus lie in the same orbit (they are "aliases" of one another).

Template:Rellink A concrete example of infinite dihedral symmetry is in aliasing of real-valued signals; this is realized as follows. If sampling a signal (signal processing term for a function) at frequency fs, then the functions sin(ft) and sin((f + fs)t) cannot be distinguished (and likewise for cos), which gives the translation (r) element – translation by fs (the detected frequency is periodic). Further, for a real signal, cos(−ft) = cos(ft) and sin(−ft) = −sin(ft), so every negative frequency has a corresponding positive frequency (this is not true for complex signals), and gives the reflection (f) element, namely f ↦ −f. Together these give further reflection symmetries, at 0.5fs, fs, 1.5fs, etc.; this phenomenon is called folding, as the graph of the detected signal "folds back" on itself, as depicted in the diagram at right.

Formally, the quotient under aliasing is the orbifold [0, 0.5fs], with a Z/2 action at the endpoints (the orbifold points), corresponding to reflection.