The theorem can be derived as follows. Suppose u(x) and v(x) are two continuously differentiable functions. The product rule states (in Leibniz’ notation):

Integrating both sides with respect to x, over an interval a ≤ x ≤ b:

then applying the fundamental theorem of calculus,

gives the formula for integration by parts:

Since du and dv are differentials of a function of one variable x,

The original integral ∫uv′ dx contains v′ (derivative of v); in order to apply the theorem, v (antiderivative of v′) must be found, and then the resulting integral ∫vu′ dx must be evaluated.

Product of many functions

In general for n factors

where the product is of all functions except for the one differentiated in the same term. 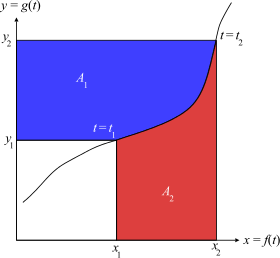 Graphical interpretation of the theorem. The pictured curve is parametrized by the variable t.

The area of the blue region is

Similarly, the area of the red region is

Assuming the curve is smooth within a neighborhood, this generalizes to indefinite integrals:

Thus integration by parts may be thought of as deriving the area of the blue region from the total area and that of the red region.

Integration by parts is a heuristic rather than a purely mechanical process for solving integrals; given a single function to integrate, the typical strategy is to carefully separate it into a product of two functions u(x)v(x) such that the integral produced by the integration by parts formula is easier to evaluate than the original one. The following form is useful in illustrating the best strategy to take:

The antiderivative of −1/x2 can be found with the power rule and is 1/x.

Alternatively, we may choose u and v such that the product u' (∫v dx) simplifies due to cancellation. For example, suppose we wish to integrate:

The integrand simplifies to 1, so the antiderivative is x. Finding a simplifying combination frequently involves experimentation.

In some applications, it may not be necessary to ensure that the integral produced by integration by parts has a simple form; for example, in numerical analysis, it may suffice that it has small magnitude and so contributes only a small error term. Some other special techniques are demonstrated in the examples below.

In order to calculate

where C is an arbitrary constant of integration.

For higher powers of x in the form

repeatedly using integration by parts can evaluate integrals such as these; each application of the theorem lowers the power of x by one.

Now, to evaluate the remaining integral, we use integration by parts again, with:

The same integral shows up on both sides of this equation. The integral can simply be added to both sides to get

where again C (and C' = C/2) is an arbitrary constant of integration.

A similar method is used to find the integral of secant cubed.

Two other well-known examples are when integration by parts is applied to a function expressed as a product of 1 and itself. This works if the derivative of the function is known, and the integral of this derivative times x is also known.

The first example is ∫ ln(x) dx. We write this as:

where C is the constant of integration.

The second example is the inverse tangent function arctan(x):

using a combination of the inverse chain rule method and the natural logarithm integral condition.

A rule of thumb proposed by Herbert Kasube of Bradley University advises that whichever function comes first in the following list should be u:[1]

The function which is to be dv is whichever comes last in the list: functions lower on the list have easier antiderivatives than the functions above them. The rule is sometimes written as "DETAIL" where D stands for dv.

To demonstrate the ILATE rule, consider the integral

Following the ILATE rule, u = x and dv = cos x dx, hence du = dx and v = sin x, which makes the integral become

In general, one tries to choose u and dv such that du is simpler than u and dv is easy to integrate. If instead cos x was chosen as u, and x.dx as dv, we would have the integral

which, after recursive application of the integration by parts formula, would clearly result in an infinite recursion and lead nowhere.

Although a useful rule of thumb, there are exceptions to the ILATE rule. A common alternative is to consider the rules in the "ILATE" order instead. Also, in some cases, polynomial terms need to be split in non-trivial ways. For example, to integrate

Finally, this results in

Integration by parts is often used as a tool to prove theorems in mathematical analysis. This section gives a few examples.

Use in special functions

The gamma function is an example of a special function, defined as an improper integral. Integration by parts illustrates it to be an extension of the factorial:

For integer z, applying this formula repeatedly gives the factorial (denoted by the !):

Use in harmonic analysis

Integration by parts is often used in harmonic analysis, particularly Fourier analysis, to show that quickly oscillating integrals with sufficiently smooth integrands decay quickly. The most common example of this is its use in showing that the decay of function's Fourier transform depends on the smoothness of that function, as described below.

If f is a k-times continuously differentiable function and all derivatives up to the kth one decay to zero at infinity, then its Fourier transform satisfies

where f(k) is the kth derivative of f. (The exact constant on the right depends on the convention of the Fourier transform used.) This is proved by noting that

Applying this inductively gives the result for general k. A similar method can be used to find the Laplace transform of a derivative of a function.

The above result tells us about the decay of the Fourier transform, since it follows that if f and f(k) are integrable then

The proof uses the fact, which is immediate from the definition of the Fourier transform, that

Summing these two inequalities and then dividing by 1 + |2πξk| gives the stated inequality.

Use in operator theory

Here, u′ is the first derivative of u and u′′ is the second derivative. Further, u(n) is a notation to describe its nth derivative with respect to the independent variable. Another notation approved in the calculus theory has been adopted:

Note that the integrand above (uv) differs from the previous equation. The dv factor has been written as v purely for convenience.

The above-mentioned form is convenient because it can be evaluated by differentiating the first term and integrating the second (with a sign reversal each time), starting out with uv1. It is very useful especially in cases when u(k + 1) becomes zero for some k + 1. Hence, the integral evaluation can stop once the u(k) term has been reached.

While the aforementioned recursive definition is correct, it is often tedious to remember and implement. A much easier visual representation of this process is often taught to students and is dubbed either "the tabular method",[2] "the Stand and Deliver method",[3] "rapid repeated integration" or "the tic-tac-toe method". This method works best when one of the two functions in the product is a polynomial, that is, after differentiating it several times one obtains zero. It may also be extended to work for functions that will repeat themselves.

For example, consider the integral

Let u = x3. Begin with this function and list in a column all the subsequent derivatives until zero is reached. Secondly, begin with the function v (in this case cos(x)) and list each integral of v until the size of the column is the same as that of u. The result should appear as follows.

Which, with simplification, leads to the result

With proper understanding of the tabular method, it can be extended. Consider

In this case in the last step it is necessary to integrate the product of the two bottom cells obtaining:

and yields the result:

The formula for integration by parts can be extended to functions of several variables. Instead of an interval one needs to integrate over an n-dimensional set. Also, one replaces the derivative with a partial derivative.

More specifically, suppose Ω is an open bounded subset of ℝn with a piecewise smooth boundary Γ. If u and v are two continuously differentiable functions on the closure of Ω, then the formula for integration by parts is

is the outward unit surface normal to Γ,

is its i-th component, and i ranges from 1 to n.

where v is a vector-valued function with components v1, ..., vn.

which is the first Green's identity.

The regularity requirements of the theorem can be relaxed. For instance, the boundary Γ need only be Lipschitz continuous. In the first formula above, only u, v ∈ H1(Ω) is necessary (where H1 is a Sobolev space); the other formulas have similarly relaxed requirements.