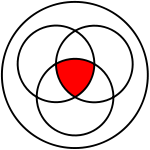 For explanation of the symbols used in this article, refer to the table of mathematical symbols.

The intersection of A and B is written "A ∩ B". Formally:

Inside a universe U one may define the complement Ac of A to be the set of all elements of U not in A. Now the intersection of A and B may be written as the complement of the union of their complements, derived easily from De Morgan's laws:
A ∩ B = (Ac ∪ Bc)c

The notation for this last concept can vary considerably. Set theorists will sometimes write "⋂M", while others will instead write "⋂A∈M A". The latter notation can be generalized to "⋂i∈I Ai", which refers to the intersection of the collection {Ai : i ∈ I}. Here I is a nonempty set, and Ai is a set for every i in I.

In the case that the index set I is the set of natural numbers, notation analogous to that of an infinite series may be seen:

When formatting is difficult, this can also be written "A1 ∩ A2 ∩ A3 ∩ ...", even though strictly speaking, A1 ∩ (A2 ∩ (A3 ∩ ... makes no sense. (This last example, an intersection of countably many sets, is actually very common; for an example see the article on σ-algebras.)

Finally, let us note that whenever the symbol "∩" is placed before other symbols instead of between them, it should be of a larger size (⋂). Conjunctions of the arguments in parentheses

The conjunction of no argument is the tautology (compare: empty product); accordingly the intersection of no set is the universe.

Note that in the previous section we excluded the case where M was the empty set (∅). The reason is as follows: The intersection of the collection M is defined as the set (see set-builder notation)

If M is empty there are no sets A in M, so the question becomes "which x's satisfy the stated condition?" The answer seems to be every possible x. When M is empty the condition given above is an example of a vacuous truth. So the intersection of the empty family should be the universal set (the identity element for the operation of intersection) [3]

Unfortunately, according to standard (ZFC) set theory, the universal set does not exist. A partial fix for this problem can be found if we agree to restrict our attention to subsets of a fixed set U called the universe. In this case the intersection of a family of subsets of U can be defined as

Now if M is empty there is no problem. The intersection is just the entire universe U, which is a well-defined set by assumption and becomes the identity element for this operation.