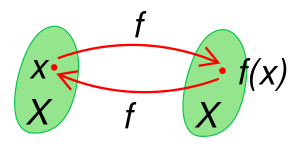 An involution is a function

that, when applied twice, brings one back to the starting point.

In mathematics, an (anti-)involution, or an involutory function, is a function Template:Mvar that is its own inverse,

Any involution is a bijection.

The identity map is a trivial example of an involution. Common examples in mathematics of more detailed involutions include multiplication by −1 in arithmetic, the taking of reciprocals, complementation in set theory and complex conjugation. Other examples include circle inversion, rotation by a half-turn, and reciprocal ciphers such as the ROT13 transformation and the Beaufort polyalphabetic cipher.

The number of involutions, including the identity involution, on a set with n = 0, 1, 2, … elements is given by a recurrence relation found by Heinrich August Rothe in 1800:

of two involutions f and g is an involution if and only if they commute:

Involution throughout the fields of mathematics

A simple example of an involution of the three-dimensional Euclidean space is reflection against a plane. Performing a reflection twice brings a point back to its original coordinates.

Another is the so-called reflection through the origin; this is an abuse of language as it is not a reflection, though it is an involution.

These transformations are examples of affine involutions.

Another type of involution occurring in projective geometry is a polarity which is a correlation of period 2. [4]

Template:Rellink In linear algebra, an involution is a linear operator T such that

For example, suppose that a basis for a vector space V is chosen, and that e1 and e2 are basis elements. There exists a linear transformation f which sends e1 to e2, and sends e2 to e1, and which is the identity on all other basis vectors. It can be checked that f(f(x))=x for all x in V. That is, f is an involution of V.

This definition extends readily to modules. Given a module M over a ring R, an R endomorphism f of M is called an involution if f 2 is the identity homomorphism on M.

Involutions are related to idempotents; if 2 is invertible then they correspond in a one-to-one manner.

In a quaternion algebra, an (anti-)involution is defined by the following axioms: if we consider a transformation

then an involution is

An anti-involution does not obey the last axiom but instead

Template:Rellink In ring theory, the word involution is customarily taken to mean an antihomomorphism that is its own inverse function. Examples of involutions in common rings:

Originally, this definition agreed with the first definition above, since members of groups were always bijections from a set into itself; i.e., group was taken to mean permutation group. By the end of the 19th century, group was defined more broadly, and accordingly so was involution.

A permutation is an involution precisely if it can be written as a product of one or more non-overlapping transpositions.

The involutions of a group have a large impact on the group's structure. The study of involutions was instrumental in the classification of finite simple groups.

Coxeter groups are groups generated by involutions with the relations determined only by relations given for pairs of the generating involutions. Coxeter groups can be used, among other things, to describe the possible regular polyhedra and their generalizations to higher dimensions.

The operation of complement in Boolean algebras is an involution. Accordingly, negation in classical logic satisfies the law of double negation: ¬¬A is equivalent to A.

The involutiveness of negation is an important characterization property for logics and the corresponding varieties of algebras. For instance, involutive negation characterizes Boolean algebras among Heyting algebras. Correspondingly, classical Boolean logic arises by adding the law of double negation to intuitionistic logic. The same relationship holds also between MV-algebras and BL-algebras (and so correspondingly between Łukasiewicz logic and fuzzy logic BL), IMTL and MTL, and other pairs of important varieties of algebras (resp. corresponding logics).

The XOR bitwise operation with a given value for one parameter is also an involution. XOR masks were once used to draw graphics on images in such a way that drawing them twice on the background reverts the background to its original state.