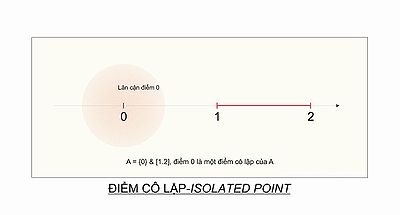 In topology, a branch of mathematics concerning the study of shapes and spaces, a point x of a topological space X is called an isolated point of a subset S of X if x belongs to S and there exists in X a neighborhood of x not containing other points of S. This is equivalent to saying that the singleton {x} is an open set in the topological space S (considered as a subspace of X).

In particular, in a Euclidean space (or in a metric space), x is an isolated point of S, if one can find an open ball around x which contains no other points of S.

Equivalently, a point x in S is an isolated point of S if and only if it is not a limit point of S.

A set which is made up only of isolated points is called a discrete set. Any discrete subset of Euclidean space is countable, since the isolation of each of its points (together with the fact the rationals are dense in the reals) means that it may be mapped 1-1 to a set of points with rational co-ordinates, of which there are only countably many. However, a set can be countable but not discrete, e.g. the rational numbers with the absolute difference metric. See also discrete space.

are homeomorphic, the number of isolated points in each is equal.

Topological spaces in the following examples are considered as subspaces of the real line with the standard topology.