In physics, jounce or snap is the fourth derivative of the position vector with respect to time, with the first, second, and third derivatives being velocity, acceleration, and jerk, respectively; hence, the jounce is the rate of change of the jerk with respect to time. Jounce is defined by any of the following equivalent expressions: 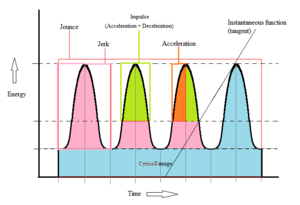 The following equations are used for constant jounce:

: time between initial and final states.

(used in [1]) is not to be confused with the displacement vector commonly denoted similarly. Currently, there are no well-accepted designations for the derivatives of jounce. The fourth, fifth and sixth derivatives of position as a function of time are "sometimes somewhat facetiously"[1][2] referred to as Snap, Crackle and Pop respectively. Because higher-order derivatives are not commonly useful, there has been no consensus among physicists on the proper names for derivatives above jounce.[2] Despite this, physicists have proposed other names such as "Lock", "Drop", "Shot" and "Put" for higher-ordered derivatives.