In particle physics, a kaon Template:IPAc-en, also called a K meson and denoted Template:SubatomicParticle,[nb 1] is any of a group of three mesons distinguished by a quantum number called strangeness. In the quark model they are understood to be bound states of a strange quark (or antiquark) and an up or down antiquark (or quark).

Kaons have proved to be a copious source of information on the nature of fundamental interactions since their discovery in cosmic rays in 1947. They were essential in establishing the foundations of the Standard Model of particle physics, such as the quark model of hadrons and the theory of quark mixing (the latter was acknowledged by a Nobel Prize in Physics in 2008). Kaons have played a distinguished role in our understanding of fundamental conservation laws: CP violation, a phenomenon generating the observed matter-antimatter asymmetry of the universe, was discovered in the kaon system in 1964 (which was acknowledged by a Nobel prize in 1980). Moreover, direct CP violation was also discovered in the kaon decays in the early 2000s.

An experimental observation made in 1964 that K-longs rarely decay into two pions was the discovery of CP violation (see below).

Decay modes for the Template:SubatomicParticle are charge conjugates of the ones above.

The discovery of hadrons with the internal quantum number "strangeness" marks the beginning of a most exciting epoch in particle physics that even now, fifty years later, has not yet found its conclusion ... by and large experiments have driven the development, and that major discoveries came unexpectedly or even against expectations expressed by theorists.  — I.I. Bigi and A.I. Sanda, CP violation, (ISBN 0-521-44349-0)

In 1947, G. D. Rochester and Clifford Charles Butler of the University of Manchester published two cloud chamber photographs of cosmic ray-induced events, one showing what appeared to be a neutral particle decaying into two charged pions, and one which appeared to be a charged particle decaying into a charged pion and something neutral. The estimated mass of the new particles was very rough, about half a proton's mass. More examples of these "V-particles" were slow in coming.

The first breakthrough was obtained at Caltech, where a cloud chamber was taken up Mount Wilson, for greater cosmic ray exposure. In 1950, 30 charged and 4 neutral V-particles were reported. Inspired by this, numerous mountaintop observations were made over the next several years, and by 1953, the following terminology was adopted: "L-meson" meant muon or pion. "K meson" meant a particle intermediate in mass between the pion and nucleon. "Hyperon" meant any particle heavier than a nucleon.

The decays were extremely slow; typical lifetimes are of the order of Template:Val. However, production in pion-proton reactions proceeds much faster, with a time scale of Template:Val. The problem of this mismatch was solved by Abraham Pais who postulated the new quantum number called "strangeness" which is conserved in strong interactions but violated by the weak interactions. Strange particles appear copiously due to "associated production" of a strange and an antistrange particle together. It was soon shown that this could not be a multiplicative quantum number, because that would allow reactions which were never seen in the new synchrotrons which were commissioned in Brookhaven National Laboratory in 1953 and in the Lawrence Berkeley Laboratory in 1955.

The intrinsic parity of a meson is P = −1, and parity is a multiplicative quantum number. Therefore, the two final states have different parity (P = +1 and P = −1, respectively). It was thought that the initial states should also have different parities, and hence be two distinct particles. However, with increasingly precise measurements, no difference was found between the masses and lifetimes of each, respectively, indicating that they are the same particle. This was known as the τ–θ puzzle. It was resolved only by the discovery of parity violation in weak interactions. Since the mesons decay through weak interactions, parity is not conserved, and the two decays are actually decays of the same particle,[5] now called the Template:SubatomicParticle. 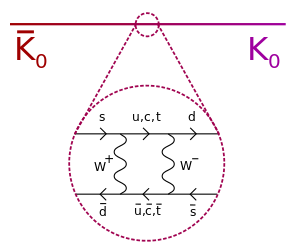 Two different neutral K mesons, carrying different strangeness, can turn from one into another through the weak interactions, since these interactions do not conserve strangeness. The strange quark in the Template:SubatomicParticle turns into a down quark by successively emitting two W-bosons of opposite charge. The down antiquark in the Template:SubatomicParticle turns into a strange antiquark by absorbing them.

Since neutral kaons carry strangeness, they cannot be their own antiparticles. There must be then two different neutral kaons, differing by two units of strangeness. The question was then how to establish the presence of these two mesons. The solution used a phenomenon called neutral particle oscillations, by which these two kinds of mesons can turn from one into another through the weak interactions, which cause them to decay into pions (see the adjacent figure).

These oscillations were first investigated by Murray Gell-Mann and Abraham Pais together. They considered the CP-invariant time evolution of states with opposite strangeness. In matrix notation one can write

The consequence of the matrix H being real is that the probabilities of the two states will forever oscillate back and forth. However, if any part of the matrix were imaginary, as is forbidden by CP symmetry, then part of the combination will diminish over time. The diminishing part can be either one component (a) or the other (b), or a mixture of the two.

The eigenstates are obtained by diagonalizing this matrix. This gives new eigenvectors, which we can call K1 which is the difference of the two states of opposite strangeness, and K2, which is the sum. The two are eigenstates of CP with opposite eigenvalues; K1 has CP = +1, and K2 has CP = -1 Since the two-pion final state also has CP = +1, only the K1 can decay this way. The K2 must decay into three pions. Since the mass of K2 is just a little larger than the sum of the masses of three pions, this decay proceeds very slowly, about 600 times slower than the decay of K1 into two pions. These two different modes of decay were observed by Leon Lederman and his coworkers in 1956, establishing the existence of the two weak eigenstates (states with definite lifetimes under decays via the weak force) of the neutral kaons.

While trying to verify Adair's results, J. Christenson, James Cronin, Val Fitch and Rene Turlay of Princeton University found decays of Template:SubatomicParticle into two pions (CP = +1) in an experiment performed in 1964 at the Alternating Gradient Synchrotron at the Brookhaven laboratory.[6] As explained in an earlier section, this required the assumed initial and final states to have different values of CP, and hence immediately suggested CP violation. Alternative explanations such as non-linear quantum mechanics and a new unobserved particle were soon ruled out, leaving CP violation as the only possibility. Cronin and Fitch received the Nobel Prize in Physics for this discovery in 1980.