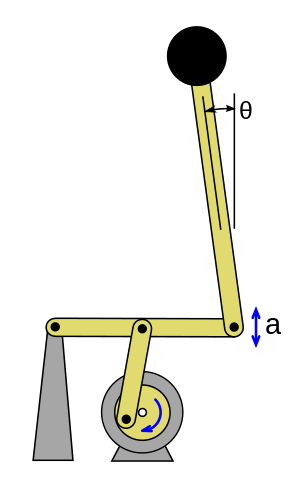 Drawing showing how a Kapitza pendulum can be constructed: a motor rotates a crank at a high speed, the crank vibrates a lever arm up and down, which the pendulum is attached to with a pivot.

Kapitza's pendulum is a rigid pendulum in which the pivot point vibrates in a vertical direction, up and down. It is named after Russian Nobel laureate physicist Pyotr Kapitza, who in 1951 developed a theory which successfully explains some of its unusual properties.[1] The unique feature of the Kapitza pendulum is that the vibrating suspension can cause it to balance stably in an inverted position, with the bob above the suspension point. In the usual pendulum with a fixed suspension, the only stable equilibrium position is with the bob hanging below the suspension point; the inverted position is a point of unstable equilibrium, and the smallest perturbation moves the pendulum out of equilibrium. In nonlinear control theory the Kapitza pendulum is used as an example of a parametric oscillator that demonstrates the concept of "dynamic stabilization".

The pendulum was first described by A. Stephenson in 1908, who found that the upper vertical position of the pendulum might be stable when the driving frequency is fast[2] Yet until the 1950s there was no explanation for this highly unusual and counterintuitive phenomenon. Pyotr Kapitza was the first to analyze it in 1951.[1] He carried out a number of experimental studies and as well provided an analytical insight into the reasons of stability by splitting the motion into "fast" and "slow" variables and by introducing an effective potential. This innovative work created a new subject in physics, that is vibrational mechanics. Kapitza's method is used for description of periodic processes in atomic physics, plasma physics and cybernetical physics. The effective potential which describes the "slow" component of motion is described in "Mechanics" volume of the Landau's Course of Theoretical Physics.[3]

Another interesting feature of the Kapitza pendulum system is that the bottom equilibrium position, with the pendulum hanging down below the pivot, is no longer stable. Any tiny deviation from the vertical increases in amplitude with time.[4] Parametric resonance can also occur in this position, and chaotic regimes can be realized in the system when strange attractors are present in the Poincaré section .

Denote the vertical axis as

and the horizontal axis as

so that the motion of pendulum happens in the (

) plane. The following notation will be used

Denoting the angle between pendulum and downward direction as

the time dependence of the position of pendulum gets written as

The kinetic energy in addition to the standard term

, describing velocity of a mathematical pendulum, there is a contribution due to vibrations of the suspension

and the Lagrangian by their difference

The total energy is conserved in a mathematical pendulum, so time

dependence of the potential

energies is symmetric with respect to the horizontal line. According to the virial theorem the mean kinetic and potential energies in harmonic oscillator are equal. This means that the line of symmetry corresponds to half of the total energy.

is bound from below and above

while the kinetic energy is bound only from below

. For high frequency of vibrations

the kinetic energy can be large compared to the potential energy.

Motion of pendulum satisfies Euler–Lagrange equations. The dependence of the phase

of the pendulum on its position satisfies the equation:[5]

up to irrelevant total time derivative terms. The differential equation

factor. The presence of the nonlinear term might lead to chaotic motion and to appearance of strange attractors.

Model of Kapitza's pendulum is more general than the model of mathematical pendulum. The latter is reproduced in the limit

. Its phase portrait is a simple circle

. If the energy in the initial moment was larger than the maximum of the potential energy

then the trajectory will be closed and cyclic. If the initial energy is smaller

then the pendulum will oscillate close to the only stably point

When the suspension is vibrating with a small amplitude

and with a frequency

much higher than the proper frequency

may be viewed as a superposition

of a "slow" component

and a rapid oscillation

with small amplitude due to the small but rapid vibrations of the suspension. Technically, we perform a perturbative expansion in the "coupling constants"

while treating the ratio

as fixed. The perturbative treatment becomes exact in the double scaling limit

The equation of motion for the "slow" component

Time averaging over the rapid

The "slow" equation of motion becomes

by introducing an effective potential

It turns out[1] that the effective potential

has two minima if

. The first minimum is in the same position

. As a result the upper vertical position, which is unstable in a mathematical pendulum, can become stable in Kapitza's pendulum.

and the equation for

Again considering the limit in which

is much higher than the proper frequency

, we find that the rapid-

limit leads to the equation:

The effective potential is just that of a simple pendulum equation. There is a stable equilibrium at

and an unstable equilibrium at

Interesting phase portraits might be obtained in regimes which are not accessible within analytic descriptions, for example in the case of large amplitude of the suspension

.[6][7] Increasing the amplitude of driving oscillations to half of the pendulum length

leads to the phase portrait shown in the figure.

Further increase of the amplitude to