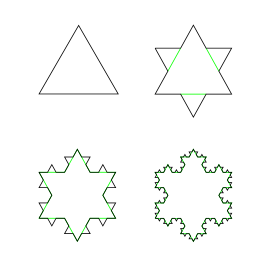 The first four iterations of the Koch snowflake

The first seven iterations in animation

Zooming into the Koch curve

The Koch snowflake (also known as the Koch star and Koch island[1]) is a mathematical curve and one of the earliest fractal curves to have been described. It is based on the Koch curve, which appeared in a 1904 paper titled "On a continuous curve without tangents, constructible from elementary geometry" (original French title: Sur une courbe continue sans tangente, obtenue par une construction géométrique élémentaire) by the Swedish mathematician Helge von Koch.

The Koch snowflake can be constructed by starting with an equilateral triangle, then recursively altering each line segment as follows:

After one iteration of this process, the resulting shape is the outline of a hexagram.

The Koch snowflake is the limit approached as the above steps are followed over and over again. The Koch curve originally described by Koch is constructed with only one of the three sides of the original triangle. In other words, three Koch curves make a Koch snowflake.

The Koch curve is continuous everywhere but differentiable nowhere.

Perimeter of the Koch snowflake

If the original equilateral triangle has sides of length s, the length of each side of the snowflake after n iterations is:

the perimeter of the snowflake after n iterations is:

Area of the Koch snowflake

where a0 is the area of the original triangle. The total new area added in iteration n is therefore:

The total area of the snowflake after n iterations is:

Limits of area and perimeter

As the number of iterations tends to infinity, the limit of the perimeter is:

. The limit of the area is:

.[2] It is, however, wrong to state that the perimeter of the Koch snowflake is unbounded, for it is not 1-dimensional and therefore cannot be measured as an 1-dimensional line. A

-dimensional measure exists, but has not been calculated so far. Only upper and lower bounds have been invented[3]

Tessellation of the plane 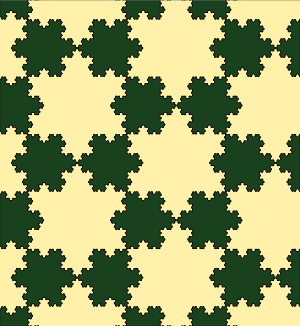 A turtle graphic is the curve that is generated if an automaton is programmed with a sequence. If the Thue–Morse sequence members are used in order to select program states:

the resulting curve converges to the Koch snowflake.

The Koch Curve can be expressed by a rewrite system (Lindenmayer system).

Variants of the Koch curve

Squares can be used to generate similar fractal curves. Starting with a unit square and adding to each side at each iteration a square with dimension one third of the squares in the previous iteration, it can be shown that both the length of the perimeter and the total area are determined by geometric progressions. The progression for the area converges to 2 while the progression for the perimeter diverges to infinity, so as in the case of the Koch Snowflake, we have a finite area bounded by an infinite fractal curve.[5] The resulting area fills a square with the same center as the original, but twice the area, and rotated by π/4 radians, the perimeter touching but never overlapping itself.

The total area covered at the nth iteration is :

While the total length of the perimeter is :

which approaches infinity as n increases