. Letters in other alphabets that stemmed from lambda include the Latin L and the Cyrillic letter El (Л, л). The ancient grammarians and dramatists give evidence to the pronunciation as Template:IPA-el (λάβδα{{#invoke:Category handler|main}}) in Classical Greek times.[1] In Modern Greek the name of the letter, Λάμδα, is pronounced Template:IPA-el; the spoken letter itself has the sound of [l] as with Latinate "L".

In early Greek alphabets, the shape and orientation of lambda varied.[2] Most variants consisted of two straight strokes, one longer than the other, connected at their ends. The angle might be in the upper-left, lower-left ("Western" alphabets), or top ("Eastern" alphabets). Other variants had a vertical line with a horizontal or sloped stroke running to the right. With the general adoption of the Ionic alphabet, Greek settled on an angle at the top; the Romans put the angle at the lower-left.

The HTML 4 character entity references for the Greek capital and small letter lambda are "&#923;" and "&#955;", respectively.[3] The Unicode number for lambda is 03BB. 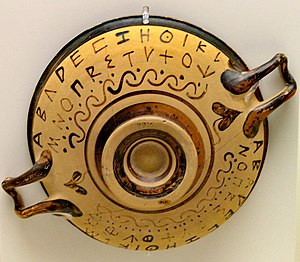 The Greek alphabet on a black figure vessel, with a Phoenician-lamed-shaped lambda. (The gamma has the shape of modern lambda.)

Lambda as a name

Unicode uses the spelling "lamda" in character names, instead of "lambda".

These characters are used only as mathematical symbols. Stylized Greek text should be encoded using the normal Greek letters, with markup and formatting to indicate text style.