Henri Lebesgue described this measure in the year 1901, followed the next year by his description of the Lebesgue integral. Both were published as part of his dissertation in 1902.[2]

The Lebesgue measure is often denoted dx, but this should not be confused with the distinct notion of a volume form.

, with the length of an (open, closed, semi-open) interval

The first part of the definition states that the subset

in the sense that when the intervals are combined together by union, they form a superset of

. Moreover, the intervals in each set are disjoint, and there is a countable infinity of these intervals. For each set, the total length is calculated by adding the lengths of this infinity of disjoint intervals. This total length of any interval set can easily overestimate the measure of

. The Lebesgue outer measure emerges as the greatest lower bound (infimum) of the lengths from among all possible such sets. Intuitively, it is the total length of those interval sets which fit

as an instrument to split

into two partitions: the part of

and the remaining part of

which is not in

: the set difference of

are subject to the outer measure. If for all possible such subsets

of the real numbers, the partitions of

, then the outer Lebesgue measure of

gives its Lebesgue measure. Intuitively, this condition means that the set

is used as a "mask" to "clip" that set, hinting at the existence of sets for which the Lebesgue outer measure does not give the Lebesgue measure. (Such sets are, in fact, not Lebesgue-measurable.) 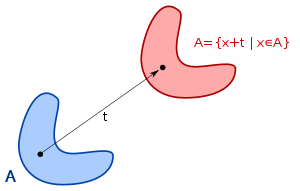 Translation invariance: The Lebesgue measure of

The Lebesgue measure on Rn has the following properties:

All the above may be succinctly summarized as follows:

The Lebesgue measurable sets form a σ-algebra containing all products of intervals, and λ is the unique complete translation-invariant measure on that σ-algebra with

The Lebesgue measure also has the property of being σ-finite.

{{#invoke:main|main}} A subset of Rn is a null set if, for every ε > 0, it can be covered with countably many products of n intervals whose total volume is at most ε. All countable sets are null sets.

In order to show that a given set A is Lebesgue measurable, one usually tries to find a "nicer" set B which differs from A only by a null set (in the sense that the symmetric difference (A − B)

(B − A) is a null set) and then show that B can be generated using countable unions and intersections from open or closed sets.

Construction of the Lebesgue measure

The modern construction of the Lebesgue measure is an application of Carathéodory's extension theorem. It proceeds as follows.

where bi ≥ ai, and the product symbol here represents a Cartesian product. The volume of this box is defined to be

For any subset A of Rn, we can define its outer measure λ*(A) by:

We then define the set A to be Lebesgue measurable if for every subset S of Rn,

The existence of sets that are not Lebesgue measurable is a consequence of a certain set-theoretical axiom, the axiom of choice, which is independent from many of the conventional systems of axioms for set theory. The Vitali theorem, which follows from the axiom, states that there exist subsets of R that are not Lebesgue measurable. Assuming the axiom of choice, non-measurable sets with many surprising properties have been demonstrated, such as those of the Banach–Tarski paradox.

In 1970, Robert M. Solovay showed that the existence of sets that are not Lebesgue measurable is not provable within the framework of Zermelo–Fraenkel set theory in the absence of the axiom of choice (see Solovay's model).[3]

Relation to other measures

It can be shown that there is no infinite-dimensional analogue of Lebesgue measure.