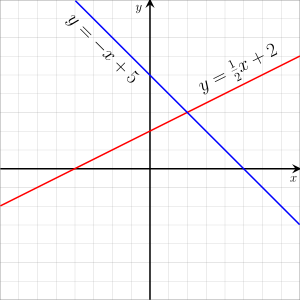 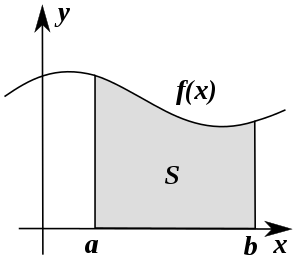 The integral of a function is a linear map from the vector space of integrable functions to the real numbers.

In mathematics, the term linear function refers to two distinct, although related, notions:[1]

As a polynomial function

In calculus, analytic geometry and related areas, a linear function is a polynomial of degree one or less, including the zero polynomial (the latter not being considered to have degree zero).

When the function is of only one variable, it is of the form

of any finite number independent variables, the general formula is

and the graph is a hyperplane of dimension k.

A constant function is also considered linear in this context, as it is a polynomial of degree zero or is the zero polynomial. Its graph, when there is only one independent variable, is a horizontal line.

In this context, the other meaning (a linear map) may be referred to as a homogeneous linear function or a linear form. In the context of linear algebra, this meaning (polynomial functions of degree 0 or 1) is a special kind of affine map.

As a linear map

In linear algebra, a linear function is a map f between two vector spaces that preserves vector addition and scalar multiplication:

Here a denotes a constant belonging to some field K of scalars (for example, the real numbers) and x and y are elements of a vector space, which might be K itself.

Some authors use "linear function" only for linear maps that take values in the scalar field;[4] these are also called linear functionals.