In linear algebra and related fields of mathematics, a linear subspace (or vector subspace) is a vector space that is a subset of some other (higher-dimension) vector space. A linear subspace is usually called simply a subspace when the context serves to distinguish it from other kinds of subspaces.

Definition and useful characterization of subspace

Let K be a field (such as the field of real numbers), and let V be a vector space over K. As usual, we call elements of V vectors and call elements of K scalars. Ignoring the full extent of mathematical generalization, scalars can be understood simply as numbers. Suppose that W is a subset of V. If W is a vector space itself (which means that it is closed under operations of addition and scalar multiplication), with the same vector space operations as V has, then W is a subspace of V.

To use this definition, we don't have to prove that all the properties of a vector space hold for W. Instead, we can prove a theorem that gives us an easier way to show that a subset of a vector space is a subspace.

Theorem: Let V be a vector space over the field K, and let W be a subset of V. Then W is a subspace if and only if W satisfies the following three conditions:

Proof: Firstly, property 1 ensures W is nonempty. Looking at the definition of a vector space, we see that properties 2 and 3 above assure closure of W under addition and scalar multiplication, so the vector space operations are well defined. Since elements of W are necessarily elements of V, axioms 1, 2 and 5–8 of a vector space are satisfied. By the closure of W under scalar multiplication (specifically by 0 and -1), vector space's definitional axiom identity element of addition and axiom inverse element of addition are satisfied.

Conversely, if W is subspace of V, then W is itself a vector space under the operations induced by V, so properties 2 and 3 are satisfied. By property 3, −w is in W whenever w is, and it follows that W is closed under subtraction as well. Since W is nonempty, there is an element x in W, and

is in W, so property 1 is satisfied. One can also argue that since W is nonempty, there is an element x in W, and 0 is in the field K so

and therefore property 1 is satisfied.

Example I: Let the field K be the set R of real numbers, and let the vector space V be the real coordinate space R3. Take W to be the set of all vectors in V whose last component is 0. Then W is a subspace of V.

Example II: Let the field be R again, but now let the vector space be the Cartesian plane R2. Take W to be the set of points (x, y) of R2 such that x = y. Then W is a subspace of R2.

In general, any subset of the real coordinate space Rn that is defined by a system of homogeneous linear equations will yield a subspace. (The equation in example I was z = 0, and the equation in example II was x = y.) Geometrically, these subspaces are points, lines, planes, and so on, that pass through the point 0.

Example III: Again take the field to be R, but now let the vector space V be the set RR of all functions from R to R. Let C(R) be the subset consisting of continuous functions. Then C(R) is a subspace of RR.

Example IV: Keep the same field and vector space as before, but now consider the set Diff(R) of all differentiable functions. The same sort of argument as before shows that this is a subspace too.

Examples that extend these themes are common in functional analysis.

In a topological vector space X, a subspace W need not be closed in general, but a finite-dimensional subspace is always closed.[1] The same is true for subspaces of finite codimension, i.e. determined by a finite number of continuous linear functionals.

Descriptions of subspaces include the solution set to a homogeneous system of linear equations, the subset of Euclidean space described by a system of homogeneous linear parametric equations, the span of a collection of vectors, and the null space, column space, and row space of a matrix. Geometrically (especially, over the field of real numbers and its subfields), a subspace is a flat in an n-space that passes through the origin.

This idea is generalized for higher dimensions with linear span, but criteria for equality of k-spaces specified by sets of k vectors are not so simple.

It is generalized for higher codimensions with a system of equations. The following two subsections will present this latter description in details, and the remaining four subsections further describe the idea of liner span.

The solution set to any homogeneous system of linear equations with n variables is a subspace in the coordinate space Kn:

For example (over real or rational numbers), the set of all vectors (x, y, z) satisfying the equations

Null space of a matrix

{{#invoke:main|main}} In a finite-dimensional space, a homogeneous system of linear equations can be written as a single matrix equation:

Every subspace of Kn can be described as the null space of some matrix (see algorithms, below).

The subset of Kn described by a system of homogeneous linear parametric equations is a subspace:

For example, the set of all vectors (x, y, z) parameterized by the equations

is a two-dimensional subspace of K3, if K is a number field (such as real or rational numbers).[2]

{{#invoke:main|main}} In linear algebra, the system of parametric equations can be written as a single vector equation:

The expression on the right is called a linear combination of the vectors (2, 5, −1) and (3, −4, 2). These two vectors are said to span the resulting subspace.

The set of all possible linear combinations is called the span:

If the vectors v1, ... , vk have n components, then their span is a subspace of Kn. Geometrically, the span is the flat through the origin in n-dimensional space determined by the points v1, ... , vk.

{{#invoke:main|main}} A system of linear parametric equations in a finite-dimensional space can also be written as a single matrix equation:

In this case, the subspace consists of all possible values of the vector x. In linear algebra, this subspace is known as the column space (or image) of the matrix A. It is precisely the subspace of Kn spanned by the column vectors of A.

The row space of a matrix is the subspace spanned by its row vectors. The row space is interesting because it is the orthogonal complement of the null space (see below). 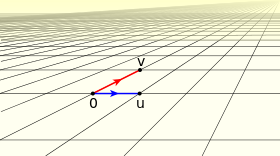 The vectors u and v are a basis for this two-dimensional subspace of R3.

In general, a subspace of Kn determined by k parameters (or spanned by k vectors) has dimension k. However, there are exceptions to this rule. For example, the subspace of K3 spanned by the three vectors (1, 0, 0), (0, 0, 1), and (2, 0, 3) is just the xz-plane, with each point on the plane described by infinitely many different values of t1, t2, t3.

In general, vectors v1, ... , vk are called linearly independent if

A basis for a subspace S is a set of linearly independent vectors whose span is S. The number of elements in a basis is always equal to the geometric dimension of the subspace. Any spanning set for a subspace can be changed into a basis by removing redundant vectors (see algorithms, below).

Then the vectors (2, 1, 0, 0) and (0, 0, 5, 1) are a basis for S. In particular, every vector that satisfies the above equations can be written uniquely as a linear combination of the two basis vectors:

Operations and relations on subspaces

The set-theoretical inclusion binary relation specified a partial order on the set of all subspaces (of any dimension).

A subspace cannot lie in any subspace of lesser dimension. If dim U = k, a finite number, and U ⊂ W, then dim W = k if and only if U = W.

In R3, the intersection of two-dimensional subspaces is one-dimensional

Given subspaces U and W of a vector space V, then their intersection U ∩ W := {v ∈ V : v is an element of both U and W} is also a subspace of V.

For every vector space V, the set {0} and V itself are subspaces of V.

If U and W are subspaces, their sum is the subspace

For example, the sum of two lines is the plane that contains them both. The dimension of the sum satisfies the inequality

Here the minimum only occurs if one subspace is contained in the other, while the maximum is the most general case. The dimension of the intersection and the sum are related:

{{ safesubst:#invoke:Unsubst||$N=Unreferenced section |date=__DATE__ |$B= {{ safesubst:#invoke:Unsubst||$N=Unreferenced |date=__DATE__ |$B= {{#invoke:Message box|ambox}} }} }} If V is an inner product space, then the orthogonal complement ⊥ of any subspace of V is again a subspace. This operation, understood as negation (¬), makes the lattice of subspaces a (possibly infinite) Boolean algebra.

In a pseudo-Euclidean space there are orthogonal complements too, but such operation does not form a Boolean algebra (nor a Heyting algebra) because of null subspaces, for which N ∩ N⊥ = N ≠ {0}. The same case presents the ⊥ operation in symplectic vector spaces.

Most algorithms for dealing with subspaces involve row reduction. This is the process of applying elementary row operations to a matrix until it reaches either row echelon form or reduced row echelon form. Row reduction has the following important properties:

Basis for a row space

Input An m × n matrix A.
Output A basis for the row space of A.

See the article on row space for an example.

If we instead put the matrix A into reduced row echelon form, then the resulting basis for the row space is uniquely determined. This provides an algorithm for checking whether two row spaces are equal and, by extension, whether two subspaces of Kn are equal.

Input A basis {b1, b2, ..., bk} for a subspace S of Kn, and a vector v with n components.
Output Determines whether v is an element of S

Basis for a column space

See the article on column space for an example.

Coordinates for a vector

If the final column of the reduced row echelon form contains a pivot, then the input vector v does not lie in S.

Basis for a null space

Input An m × n matrix A.
Output A basis for the null space of A

See the article on null space for an example.

Equations for a subspace

Example
If the reduced row echelon form of A is

then the column vectors c1, ..., c6 satisfy the equations

It follows that the row vectors of A satisfy the equations

In particular, the row vectors of A are a basis for the null space of the corresponding matrix.