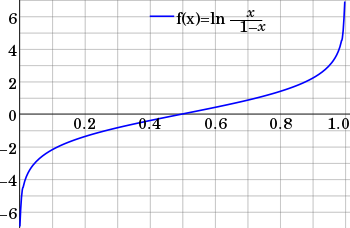 Plot of logit(p) in the domain of 0 to 1, where the base of logarithm is e

The logit (Template:IPAc-en Template:Respell) function is the inverse of the sigmoidal "logistic" function or logistic transform used in mathematics, especially in statistics. When the function's parameter represents a probability Template:Mvar, the logit function gives the log-odds, or the logarithm of the odds Template:Mvar/(1-Template:Mvar).[1]

The logit of a number p between 0 and 1 is given by the formula:

The base of the logarithm function used is of little importance in the present article, as long as it is greater than 1, but the natural logarithm with base e is the one most often used. The choice of base corresponds to the choice of logarithmic unit for the value: base 2 corresponds to a bit, base e to a nat, and base 10 to a ban (dit, hartley); these units are particularly used in information-theoretic interpretations.

The "logistic" function of any number

is given by the inverse-logit:

Log odds was used extensively by Charles Sanders Peirce (late 19th century).[2] The logit model was introduced by Joseph Berkson in 1944, who coined the term. The term was borrowed by analogy from the very similar probit model developed by Chester Ittner Bliss in 1934.[3] G. A. Barnard in 1949 coined the commonly used term log-odds; the log-odds of an event is the logit of the probability of the event.{{ safesubst:#invoke:Unsubst||date=__DATE__ |$B= {{#invoke:Category handler|main}}{{#invoke:Category handler|main}}[citation needed] }} 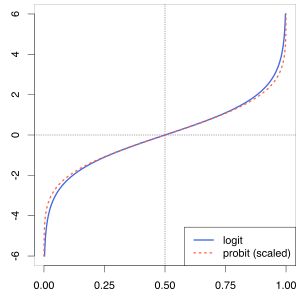 Comparison of the logit function with a scaled probit (i.e. the inverse CDF of the normal distribution), comparing

, which makes the slopes the same at the y-origin.

is the CDF of the normal distribution, as just mentioned:

As shown in the graph, the logit and probit functions are extremely similar, particularly when the probit function is scaled so that its slope at y=0 matches the slope of the logit. As a result, probit models are sometimes used in place of logit models because for certain applications (e.g., in Bayesian statistics) the implementation is easier.